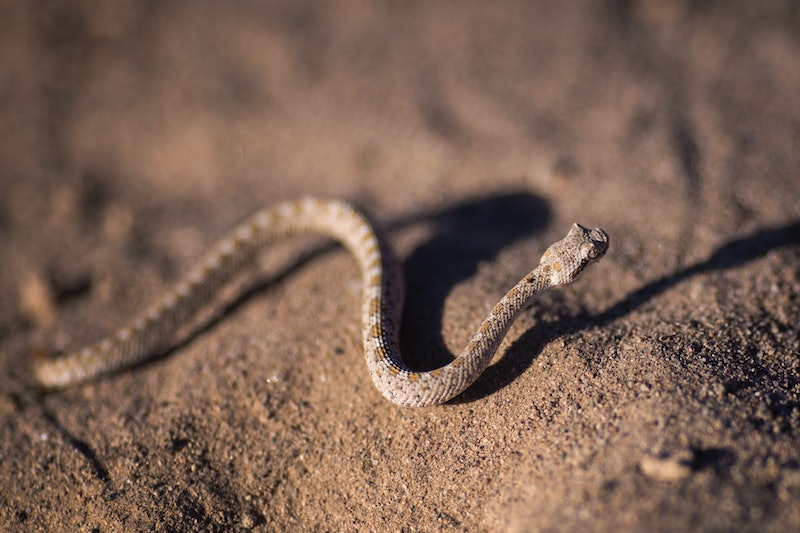 Well, this is about to put a serious damper on any of your pool party plans: apparently, snakes can be hiding out and living in your pool noodles. You know those long, squishy, foam noodles that you lazily float around on or use to playfully hit (and torture) anyone you're hanging out with? Yeah, you might want to check them before you use them as a float, because snakes could actually be inside your pool noodle, within the long hole that runs down the middle. This is basically a nightmare.

This warning came from the City of Buckeye Fire Department in Arizona. In a post on Facebook, the fire department urged citizens to be careful where they store their pool noodles. One of their citizens reportedly passed on a truly horrifying story: they left two pool noodles outside of the pool against a cinderblock wall, and when they picked them up to use them, a rattlesnake popped out. Fortunately, the snake did not attack them, but the person also said that there were more than one of them in the noodle.

Yes, you read that correctly: there was not one, but several rattesnakes hanging out in the inside of an innocent pool noodle. And it gets worse!

The Facebook post goes on to say that after researching it, the department found that there had been reports of snakes actually laying their eggs inside the pool noodle, if the noodle was left outdoors. These aren't rattlesnakes, as they do not lay eggs. We're not sure if that last bit of info makes this better or worse. On the one hand, at least it isn't all rattlesnakes. On the other hand, that means that snakes in general see a fun pool noodle and think, "Oh, look, a new home!" And that is quite horrifying.

If you still feel that you need a pool noodle in your life even after reading this story, you can try to avoid running into snakes inside of them by storing the noodles inside instead of outside. Even in a shed, if snakes can get in there, could be tricky. Of course, this is a bigger concern if you live somewhere snakes live (like Arizona). Even if you don't live in an area populated by terrifying snakes, you should be careful — one has to assume that if snakes are doing it, other spooky animals and bugs could be crawling in there to hide out as well.

If you do encounter a rattlesnake (or any other scary snake) in your pool noodle, the fire department had some tips on exactly what you should do. For one thing, stay calm. Now, of course, this is extremely easier said than done, and your instinct is going to be to run like hell until there is a lot of distance between you. But according to the fire department, "one of the worst things you can do when coming across a rattlesnake is to start panicking. Snakes rely on vibrations in the ground to determine where you are. If you start moving fast and abruptly, you'll only scare the snake more." So, basically, try to stay in one spot.

Give the snake as much room as possible. If you hear it rattle, it's startled, and your best chance to not get bit is to stay where you are. Let the snake calm down and disappear. The fire department promises they don't want to bite you and are freaked out - but they will if they feel they need to protect themselves. If you're curious about what else rattlesnakes will do, call Rattlesnake Solutions at 480-237-9975.

It's safe to say that pool noodles no longer hold the charm they once had. Stay safe out there everyone! You never know where snakes could be hiding, apparently.