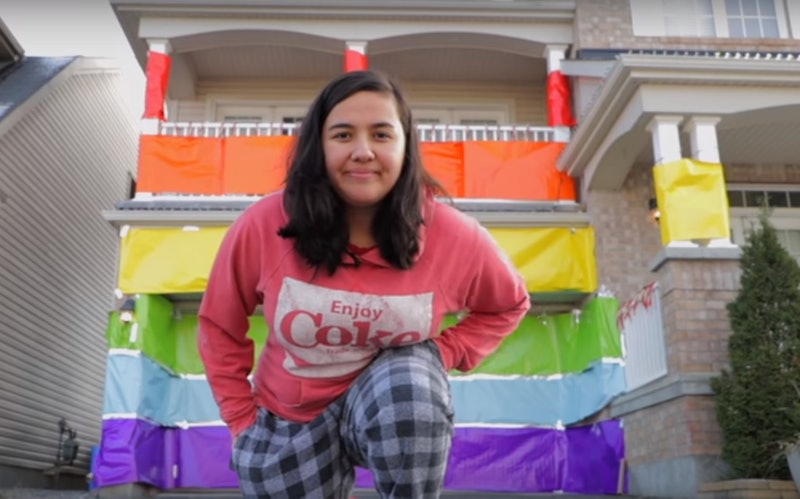 Get ready for your heart to melt like a summertime popsicle. Canadian YouTuber ElleoftheMills, aka Elle Mills, came out as bisexual by sharing a touching video of her family members' and friends' reactions to the news, and the video is giving the internet every single feeling.

Mills, who rose to fame by creating popular genre switch-up videos like "If Stranger Things Were A Romantic Comedy" (nearly 400,000 views) and "If Lizzie McGuire Were A Thriller" (166,000 views), now has more than 600,000 subscribers. In "Coming Out (Elle Mills Style)," Mills opens by sharing the most frequently asked question she gets from all those subscribers and random YouTube commenters alike: "Are you gay?"

"Throughout the years, I have found [many guys] attractive, but deep down, I knew I had other attractions as well," she explains, voicing over the video's opening. "It's a side of myself that I've been so scared of that I heavily repressed it... until I met her. Now, I don't want to get your hopes up. This isn't a love story. But this is my coming-out story."

Mills goes on to tell viewers that she came out to three of her friends first, and that she now has some family and friends she needs to get up to speed. Which brings us to the most get-your-tissues-ready part of the video: Her family members' and friends' individual reactions to her coming out.

Mills comes out to her friends first by describing her crush and asking them to draw the person based on her description. When they were finished drawing, she showed them a picture of her crush — a girl. And after her friends all had positive (and very, very moving) reactions, she enlisted them to help her come out to her immediate family by covering the front of her house in rainbow wrapping paper.

Despite the warm response Mills gets from her friends (and her family!), the video also shows Mills expressing the anxiety and fear that surrounds the coming-out experience for a lot of queer people. In the middle of the vid, during a segment filmed three days before coming out to her family, Mills is shown crying.

"I'm not gonna lie, I'm a little scared," she explained. "Growing up, there's always been a negative undertone about the LGBTQ+ community, I'm scared that my relationships with the people in my life right now are gonna be different."

Don't worry, though; Mills' family members' reactions are just as positive as her friends'. And at the end of the vid, Mills reintroduces herself, closing out with a remix of her traditional opening: "Hi. I'm Elle Mills, and I'm bisexual."

Fans, fellow YouTubers, and new viewers alike are sharing their feels about Mills' video, including one of YouTube's most popular vloggers, author John Green.

Many folks are stoked that a queer person of color is coming out so visibly.

And there are some fans feeling all of the emotions simultaneously...

...while others are proving tissues are a must-have for this vid.

And some can only sum up their feels in memes.

If Mills' video makes you want to dive into a joyous spiral of happy coming out videos in order to insulate yourself from the ongoing hellscape we live in, luckily YouTube is a treasure trove. There are thousands of coming out videos, including what's possibly the original heart-melting coming out video: Airman Randy Phillips' 2011 tape of his coming out phone call to his father, placed on the day Don't Ask, Don't Tell ended. Then 21, Phillips expressed the same fear as Mills, but received an equally warm response from his father, who told Phillips he was proud of him and that his sexuality didn't change their relationship.

Despite the ground queer people have gained in the past decade, we're far from a world of perfect acceptance. Videos like Mills' help folks who may not have the same welcoming environment, not only because they show there are queer people literally everywhere, achieving success in every industry, but because they show there are plenty of people out there who will happily welcome queer folks into their homes and into their families.