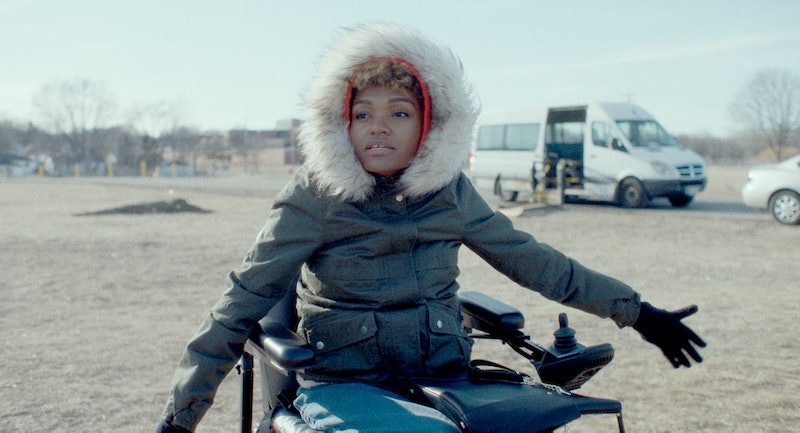 Despite having never acted before, when Lauren "Lolo" Spencer's agent approached her with the opportunity to audition for a feature film playing a woman living with ALS, Spencer, who was diagnosed with ALS at age 14 and uses a wheelchair, saw an important opportunity to be part of a sea change of representation for people with disabilities in the entertainment industry.

"Knowing that I'm helping to push the narrative forward and showing that people with disabilities can be fun, fly, and sexy is important," Spencer, who is also the creator of the popular Sitting Pretty YouTube channel, tells Bustle.

She got the part. And her debut role in the critically acclaimed movie Give Me Liberty is another important way for Spencer to increase visibility for people living with disabilities. "Once, the industry sees that a film that has people with disabilities in it can make money, then more [opportunities for] representation will be available and will be done authentically," she says.

On her Sitting Pretty channel, Spencer embodies living fearlessly and embracing her authentic self while also sharing a raw and honest firsthand perspective of disabled life. She brings that same fierceness to Give Me Liberty and her portrayal of Tracy, a vibrant young woman with ALS who uses a wheelchair and relies on a medical transport van to get around.

One of the most important things to Spencer and the filmmakers was making sure the movie was an authentic portrayal of people living with disabilities. "That was one of the things I appreciated most, which made me feel comfortable taking on the role," Spencer says. "I figured, well, if this is going to be my first role, it might as well be a role or a character that I can relate to in more ways than one."

She worked with the filmmakers, director Kirill Mikhanovsky and writer/producer Alice Austen, to flesh out the character of Tracy. The story is based on Mikhanovsky's experiences as a medical transport driver in Milwaukee, the first job he had in the U.S. after immigrating from Russia.

"There was definitely a level of collaboration because they wanted to be sure that what they had on paper was authentic. They wanted to make sure it was believable and that people understood that Tracy is a real person somewhere in this world," Spencer says.

ALS, or amyotrophic lateral sclerosis, is a disease that destroys the neurons responsible for voluntary muscle control. The Cleveland Clinic reported that the average age of onset for ALS is 55, and ALS in teens is rare. When she was first diagnosed at age 14, Spencer says she wasn't sure what to think because she didn't know anyone with a disability, let alone anyone with ALS.

According to the ALS Association, half of all people with ALS live three or more years after receiving a diagnosis, 20% live five years or more, and 10% live more than 10 years. Spencer, 32, has been living with ALS for 18 years. After doing her own research, she says she made a conscious decision she wasn't going to be a statistic.

"I didn't know how powerful that decision was at the time. Once I got older, and learned about law of attraction and the universe and all these different things, I realized it was a really powerful decision," she says. "Ever since then I've done my best to stay in a positive mindset, flip my perception on a lot of things that I've experienced, and [surround myself with] people who love and support me 100%. All of those things are incredibly helpful."

In addition to starring in Give Me Liberty, producing Sitting Pretty, and working a full time marketing job in Los Angeles, Spencer is a model for Tommy Hilfiger Adaptive, Zappos Adaptive, and other brands that create adaptive clothing and support people with disabilities.

"I believe the entertainment and beauty industries are the industries that push culture forward. They're the ones that get people to pay attention and what better way to break through than into that, into those two areas," Spencer says.

Along with the support of her family and friends, Spencer says knowing that she's making a difference is one of the things that keeps her motivated. "I believe God never puts more on you than you can bear. If the greater powers that be put it on you to live with a disability, and if every person on this earth is meant to pursue something that is purposeful to be of service for other people, and you have to do it through the vessel of disability, then that means it's an honor."

More like this
This Psychological Effect Might Be Keeping You From Hitting Your Goals
By Lexi Inks
Why TikTok Is Obsessed With Caesar Salads Right Now
By Alexis Morillo
Behind The Hilarity Of The "POV: You Walk Into My Room" TikTok Trend
By Lexi Inks
TikTok's Butter Board Might Be The New Cheese Plate
By Emma Carey
Get Even More From Bustle — Sign Up For The Newsletter