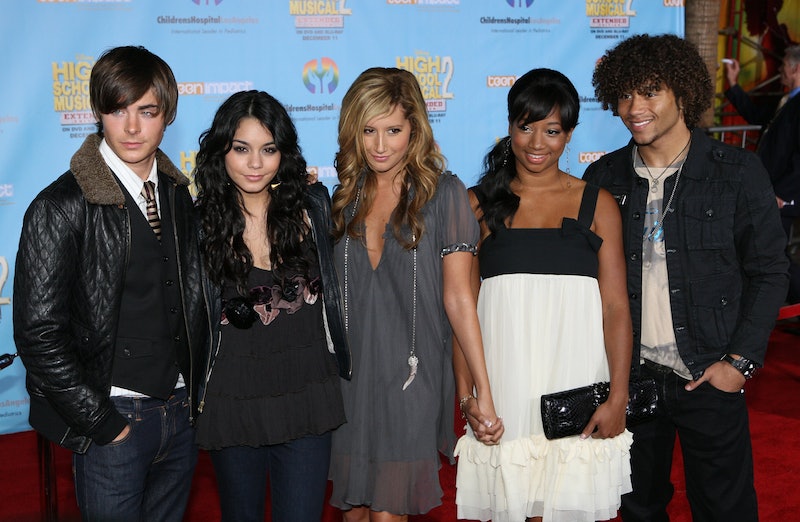 If the coronavirus pandemic has proven anything, it's that we're all in this together (literally). Of course, the cast of High School Musical has known this since 2006, and everyone is coming back together (yes, everyone) to give us some hope during this time. Even Zac Efron is reuniting with the High School Musical cast for this special event — well, sort of.

Cast members from the iconic Disney Channel Original Movie, including Vanessa Hudgens, Ashley Tisdale, Corbin Bleu, Lucas Grabeel, Monique Coleman, and Kaycee Stroh will reunite remotely and perform "We're All In This Together" on ABC's special The Disney Family Singalong. Efron is participating, but due to timing, he won't be joining in on the performance. His contribution will be a special message instead.

“We couldn’t reach Zac until late but when we did, he immediately jumped in, of course,” the film's director Kenny Ortega told Deadline on Monday, April 13. Regardless, this is his first time participating in an HSM reunion since 2016, when he sent a message for the film's 10-year anniversary special while the rest of the cast reunited in person.

Tisdale confirmed the news on her Instagram, posting a photo of Deadline's article and sharing how excited she was to get the gang back together (virtually). "IT'S HAPPENING!!!," she excitedly wrote. "We have reunited for a special night just for you guys! Honestly all I want to do in this moment is bring everyone some joy."

Ortega was inspired to bring the cast back together after Tisdale posted a Tik Tok video of her recreating the iconic "We're All In This Together" routine, which in turn inspired fans and fellow castmates to join in while in quarantine. “I think Ashley started this whole movement with her home video,” he told Deadline. “I can’t imagine that Matthew Gerrard and Robbie Nevil, who wrote this song, had any idea that it would have the legs and perhaps mean more now than when we first did it.”

Remarkably, the HSM crew won't be the only ones singing the anthem of unity. Ortega has gathered members from his extended Disney Channel family for the performance, including Raven-Symoné, who he worked with on The Cheetah Girls, and stars from series and films including The Descendants, Zombies, and High School Musical: The Musical: The Series.

Other artists who are set to perform on the Ryan Seacrest-hosted Disney Family Singalong include Ariana Grande, Demi Lovato, and Christina Aguilera. All of the performers will sing classic Disney songs from home, including hits from The Lion King, Frozen, The Little Mermaid, and more. The ABC special airs on Thursday, April 16, so basically, Wildcats everywhere, raise your hands up in the air!