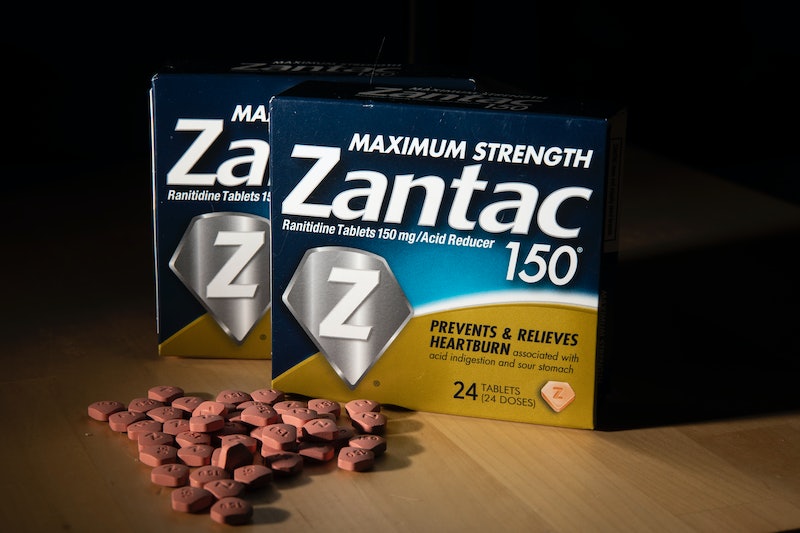 If you ever buy heartburn medication at the drugstore, you might notice there are less options on the shelf now. Though the FDA hasn't advised people to stop taking these drugs, popular drugstores like Walgreens, Rite Aid, and CVS are pulling Zantac off their shelves because of concerns over possible ingredients that could cause cancer. Though more information is needed, there are a few things you should know before you start cleaning out your medicine cabinet.

The over-the-counter medication, which is used for heartburn and acid reflux, is a brand of ranitidine, a drug that's often used to curb the amount of acid your stomach produces. Because there are possible links between NDMA (which was found in the drug in trace amounts) and cancer, the FDA has decided to take a closer look into it. However, the agency has not recalled ranitidine or recommended that patients stop using it. As CBS News reported, Sanofi, the company that sells Zantac, released this statement on Saturday:

The FDA reported that the levels of N-nitrosodimethylamine (NDMA) in ranitidine in preliminary tests barely exceed amounts found in common foods. We are working closely with the FDA and are conducting our own robust investigations to ensure we continue to meet the highest quality safety and quality standards. At Sanofi, we remain committed to being transparent with our patients and consumers and will share an update when one is available. There are currently no plans to stop distributing or manufacturing Zantac or other ranitidine products outside of Canada.

NDMA in very small amounts isn't believed to have a significantly negative impact on humans, the Washington Post reported, and not all ranitidine products have been recalled. In fact, you can also find NDMA in grilled meat and some dairy products. As Dr. Janet Woodcock, research director for the FDA's Centers for Drug Evaluation and Research, told CBS News, the amounts of NDMA found in ranitidine products during the testing process "barely exceed amounts you might expect to find in common foods." That being said, the European Medicines Agency still considers it a "probable human carcinogen" if ingested in larger amounts.

“We will continue to investigate and work to ensure these types of impurities do not exceed acceptable limits, so that patients can continue taking the medicines they need without concern," Acting FDA Commissioner Ned Sharpless, M.D. said in an FDA press release. Along with its own plans to test the drug across several manufacturers, the FDA is also urging manufacturers of ranitidine to conduct their own tests and investigations, and then to send samples as well as their results to the agency so that they can find well-rounded and conclusive answers.

“The agency is working with international regulators and industry partners to determine the source of this impurity in ranitidine," FDA spokesman Jeremy Kahn told the Washington Post. "We are also working to understand what happens to NDMA levels in the body after administration of ranitidine.” According to the Agency for Toxic Substances and Disease Registry, links between NDMA and cancer were only found in rats and mice, and require more research.

Although a lot of the details are fuzzy right now, you can return certain ranitidine products if you feel uncomfortable taking them. CVS has made it so its customers can return the medication and even receive a refund for it, according to CNN. And if you still need to find relief for heartburn or acid reflux and would prefer to take a different medication, you can always talk to your doctor about the safe alternatives that are available, at least until the FDA comes to a conclusion.