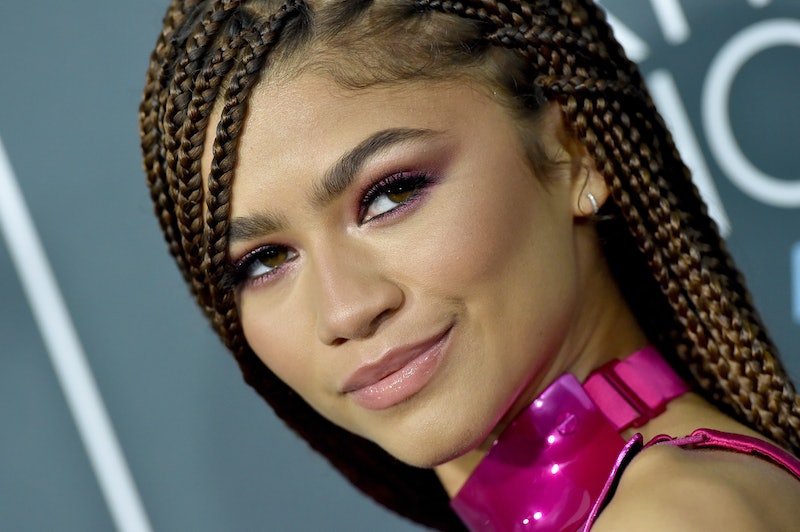 Zendaya may not have gotten a Golden Globe nomination this year, but the star of HBO's hit series Euphoria did garner a nod for her performance at the Critics Choice Awards. At the event, the star came to the red carpet to remind everyone just how flawless she is. Zendaya's Critics Choice Awards dress was major not just because of its vibrant color and unique design elements but also because the look harkens back to one of her most well known ensembles ever.

On Jan. 12, Zendaya attended the Critics Choice Awards wearing fuchsia Tom Ford separates. The hot pink look featured a flowing skirt that sat at the actor's natural waist and reached the ground, but it was the crop top that was made the look so major.

The cropped top featured a sculpted, shining asymmetrical panel that looked to have been molded across the actor's chest and was held in place with matching straps and buckles. Zendaya looked as if she had decided to don a piece of fashionable, bright pink armor for the night. It's the knight in shining (pink) armor comparison that recalls one of the most well-known and celebrated looks she's ever worn.

Back in 2018, Zendaya attended the Met Gala during its Catholicism-themed exhibit. For the evening, the Euphoria star donned a silver chainmail gown from Versace that channeled Joan of Arc. Part of the ensemble featured molded plates across her chest and over her arms that were meant to resemble armor.

While the looks are different in terms of tone (hello, one is hot pink), both feature armor-esque elements that lend a fierceness to them.

According to People, Zendaya isn't the only person to love Tom Ford's molded crop top. Gwyneth Paltrow also recently wore the piece on her cover of Harper's Bazaar. Like the social media world, Paltrow seems to have fallen in love with Zendaya's Critics Choice Awards look commenting on a Man Repeller Instagram post that she was happy to be able to have something in common with the star.

While Zendaya may not have meant to twin with Paltrow or throw it back to her 2018 Met Gala look, her dress at the Critics Choice Awards may definitely go down as one of her best.