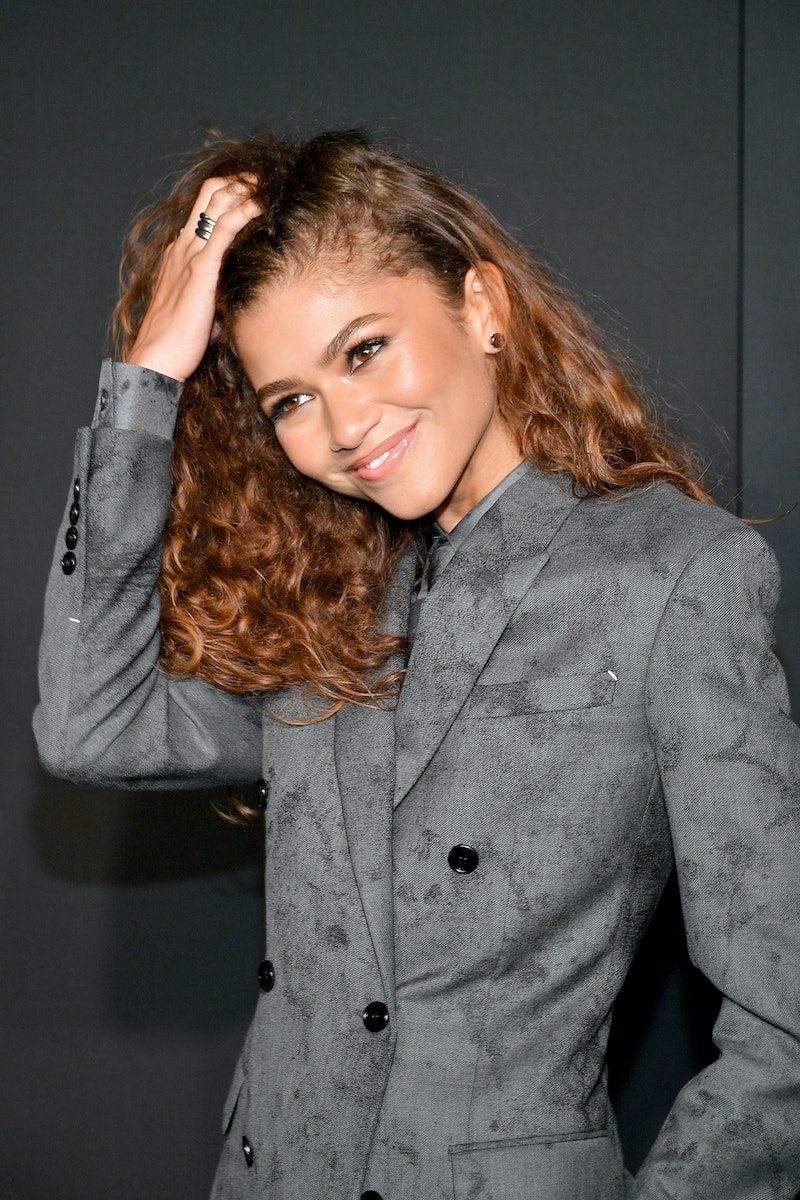 This is fashion recycling at its finest. Zendaya wore the same suit as Michael B. Jordan — albeit several months apart. Zendaya slayed the sharp and snazzy suit during a NYFW event last week while Jordan rocked it during Oscar season last February. The Berluti suit features a charcoal gray base, a black print pattern, a matching shirt, and trousers in an ever-so-slightly cropped length. The ensemble also boasts a double-breasted blazer.

Zendaya, who is riding high on the critical accolades for her powerful work as the lead character in the first season of the HBO series Euphoria, wore the suit to the Harper's Bazaar Icons Party on Sept. 6. She opted for flowy, spiral curls, smoky eyes, and nude lips. A pair of black satin Christian Louboutin platform pumps and a skinny tie completed her killer look. Back in February at the annual Vanity Fair Oscars soirée, Jordan donned the suit with a statement ring and watch.

Zendaya's longtime stylist Law Roach even noted his client and Jordan were matching in a post on his personal Instagram. While each star brought their own personal flair to the outfit and served up lewks, the internet began wondering aloud about who wore it better. Because that's just what the internet does. The celebrity news Instagram account The Shade Room posted a shot of the actors side by side and E! reported that Jordan himself commented on the post, writing that Zendaya was the "hands down" fashion victor and that it was "no contest."

While it literally was not a contest and both looked smashing, Jordan appears to have a good-natured attitude about the comparisons. As of press time, Zendaya has not publicly commented on matching looks with Jordan. However, in a world where couture and high-end looks are worn by one celebrity to one major red carpet event before fading from view, it is certainly refreshing to see a cool outfit in the spotlight a second time and with a whole new presentation from a different celebrity.

Zendaya has steadily established herself as one of the brightest and boldest style stars of her generation. She regularly ends up on best-dressed lists and is always one to watch at red carpet events since she always keeps her fans guessing about what she will wear. She is also a big fan of suits and sets, as seen by the billowy and blue, pajama-inspired ensemble she worn in June 2019.

Jordan never disappoints on a red carpet, either. He wore one of headline-grabbing Virgil Abloh for Louis Vuitton harnesses (aka "bibs") to the 2019 SAG Awards earlier this year. The printed accessory added an awesome pop of color to his classic, dark suit. It also proved that he is a head-turner with an eye for memorable pieces.

If you want to copy Zendaya's style, the actor and singer partnered with Tommy Hilfiger for the TOMMYXZENDAYA collection. Their latest range is currently available for purchase and runs from approximately $50 to $1,300. The assortment features loads of fall pieces, including velvet bell bottoms (pictured above), houndstooth coats, leather trenches, polka dot pants and dresses, platform heels, swimwear, and several adaptive pieces, making it a collection that is truly wearable by all. Both Zendaya's overall personal style and her latest fashion collab reminds us that fashion shouldn't have any boundaries.