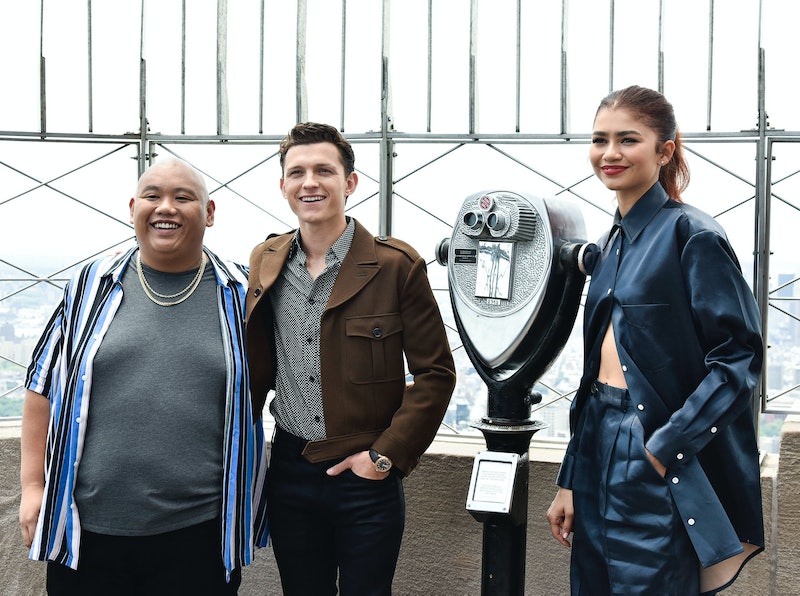 With Spider-Man: Far From Home hitting theaters on July 2, fans are excited to see more of the adorably awkward yet captivating chemistry between Peter Parker (Tom Holland) and his classmate Michelle Jones (Zendaya). Michelle is somewhat of a loner throughout 2017's Spider-Man: Homecoming, but her sarcasm contributed some of the movie's best moments. Her most jaw-dropping moment, however, comes at the end of the movie when she tells Peter, "My friends call me MJ." The nickname is a reference to Spider-Man's comic book love interest Mary Jane Watson, of course. So is Zendaya's Spider-Man character really Mary Jane? Or was that just a tease?

Though Peter Parker has a few love interests in the Spider-Man comics, he eventually marries his high school sweetheart, Mary Jane Watson. In the earlier Tobey Maguire movies, Mary Jane was played by Kirsten Dunst. Mary Jane was absent from the Andrew Garfield series, with Emma Stone's Gwen Stacy as the female lead. (Shailene Woodley shot scenes for The Amazing Spider-Man 2, but was cut from the final version, per The Los Angeles Times.) Zoë Kravitz voiced the character in last year's animated hit, Spider-Man: Into the Spider-Verse. But even though Mary Jane is a staple in Peter Parker's life in the comics, these MCU movies are going in a different direction.

The official MCU stance is that Zendaya's character isn't Mary Jane, but a new character created for the movies. Marvel Studios president Kevin Feige told IGN back in 2017 that Michelle's nickname was never meant to be a reveal, but "more of just a fun homage to his past adventures and his past love." He continued, "She's not Mary Jane Watson. She never was Mary Jane Watson. She was always this new high school character, Michelle, who we know there's an "M" in Michelle and an "M" in Mary. [laughs] So we're so clever and we thought, 'Wouldn't it be neat if her initials were MJ?' And then I think it leaked that she would be playing MJ and then it became a whole headache for Zendaya to have to navigate."

But even though it seems pretty certain that Zendaya's character still isn't secretly harboring another identity, that hasn't stopped the actor from having a little fun with the reference. At a recent Spider-Man event in London, she debuted a flaming new hair color that is super reminiscent of May Jane's famous red locks. It set fans to theorizing on Twitter that it was a huge clue about Michelle's "real" name. Zendaya even tweeted pics of her new 'do with one of Mary Jane's most famous lines from the comics: "Face it, Tiger."

Despite the red connection, Zendaya assured a fan in a follow-up tweet that her read hair was simply an, "MJ homage," and not any kind of secret character reveal. However, some fans are still being a bit jerky about the actor's role in the MCU. In one since-deleted tweet, a Twitter user replied to Zendaya's original post by writing, "Not my MJ." Zendaya responded to the troll with a tweet saying, "Too late," under a picture of Rhianna (with red hair) sticking out her tongue.

Fans will likely always harbor a suspicion that Michelle is really Mary Jane, but regardless of any impending huge reveal, Zendaya has made this character her own.