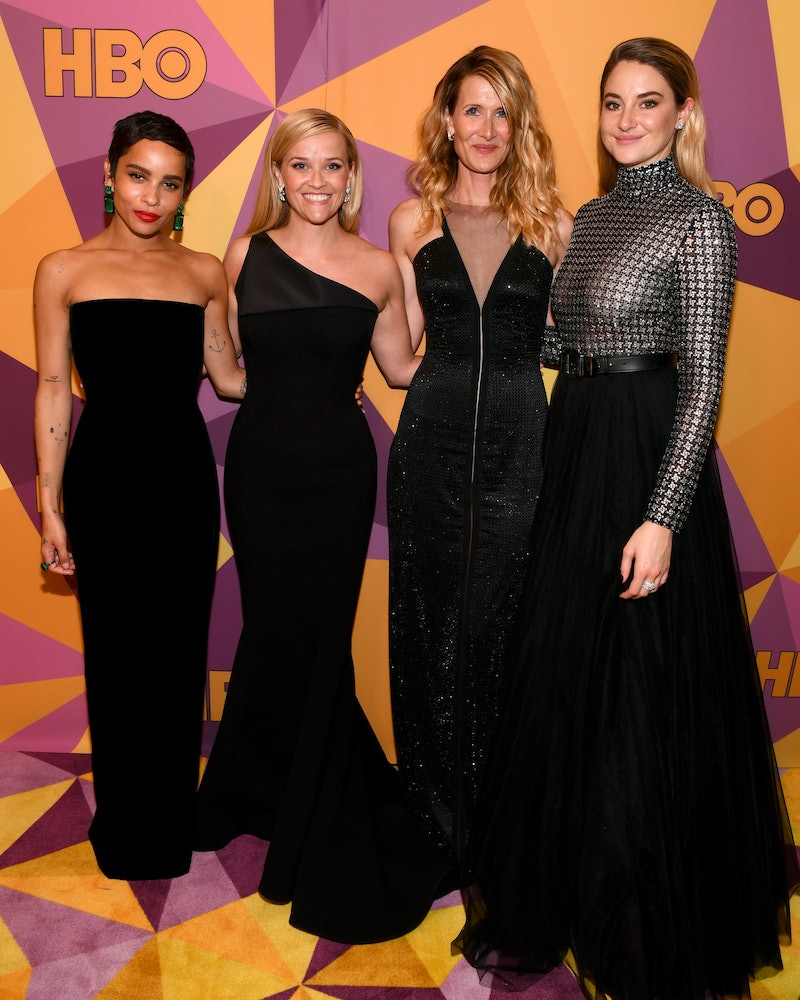 Four of the Monterey 5 will always have Paris. Among the guests at Zoë Kravitz's wedding to Karl Glusman in France, on Saturday, June 29, were Big Little Lies castmates Reese Witherspoon, Laura Dern, and Shailene Woodley, according to People, Access, and other outlets reporting.

Held at the Paris home of Zoë's dad, Lenny Kravitz, the nighttime nuptials, which multiple outlets confirmed, were also attended by several other A-listers, including, Zoë's mom Lisa Bonet, as well as Bonet’s husband, Jason Momoa, and director Sam Taylor-Johnson, who was escorted by husband, Aaron Taylor-Johnson. The rocker's three-story, eight-bedroom, 18th-century mansion, has a no-shoes policy, per People — which would explain the pre-ceremony Instagram photo Lenny posted of himself chilling coolly with an undone bowtie.

As far as the BLL women's attendance, that part wasn't exactly a well-orchestrated secret. One day earlier, several of the actors were photographed arriving at Paris' Restaurant Lapérouse, where, per People, Kravitz and Glusman's rehearsal dinner took place. Inside the two-story townhouse on the Seine, partygoers — among them, Zoë's famous family, along with Cara Delevingne, Ashley Benson, Pauletta and Denzel Washington, Chris Pine, Annabelle Wallis, and Marisa Tomei — dined on everything from lobster millefeuille, tuna tartare, steamed sea bass, dessert cheese, and chocolate cake.

And there was plenty of revelry too, of course. “Any room with Lenny and Jason and Denzel in it, well… was crazy and insane," the restaurant's co-owner, Grégory Lentz, revealed to People of the "tremendously joyous" pre-wedding fete. "There was so much love in the room. There were toasts and they were moving into tequila when I left. They were still going at 2 a.m."

Actor Nicole Kidman first confirmed the core BLL cast was attending the nuptials, during an April interview with Vanity Fair. How could they not? Describing the familial bond among the costars, she shared: "To watch Zoe and Shailene grow up and to see them become women … it's so nice, and I've never had that. I know Laura and Reese feel that, too. We’re all so different, yet we complement each other."

Initially, the City of Lights was meant to be more than just a wedding location for Kravitz and her new husband. Glusman had planned a surprised French proposal — but when work interfered — he popped the question in their living room instead.

“I was in sweatpants,” Kravitz recalled in a Rolling Stone cover story, adding that he'd lit some candles and played Nina Simone. “I think I was a little drunk. I could feel his heart beating so fast — I was like, ‘Baby, are you OK?’ I was actually worried about him!”

But, as she noted, sometimes the best moments are one you don't see coming. “He nailed it,” she added. “And I love that it wasn’t this elaborate plan in Paris. It was at home, in sweatpants.”

The couple's first meeting was also pretty low-key — and equally adorable. After crushing on Kravitz from afar during an outing with some mutual friends at a bar, as RS explained, Glusman was too nervous to talk to his now-wife. So at the end of the night, waited outside, pretending to be on her phone, and invited him to an afterparty with friends at her home, which he moved into soon afterward.

Kravitz elaborated on the night they met in a recent interview with British Vogue.

“I love that it wasn’t on an app and that it wasn’t on a movie set. My friend knew that I wanted to meet someone — not even to get serious, I think just to get laid, to be completely honest with you — and he brought Karl. I instantly felt something — then he turned around and started talking to the blonde girl next to him and I was like, ‘Wait, what?’. But he later told me that he was just nervous.”

The Paris nuptials, didn't exactly make the marriage official, however. In May, Us Weekly reported that Kravitz and Glusman were already legally married. The mag didn't reveal when or where the first civil ceremony took place, but did note, at the time, that the couple was still planning a traditional ceremony for this summer.

Now that the pair has affirmed their commitment in front of family and friends, fans know exactly how the couple celebrated with those closest to them.