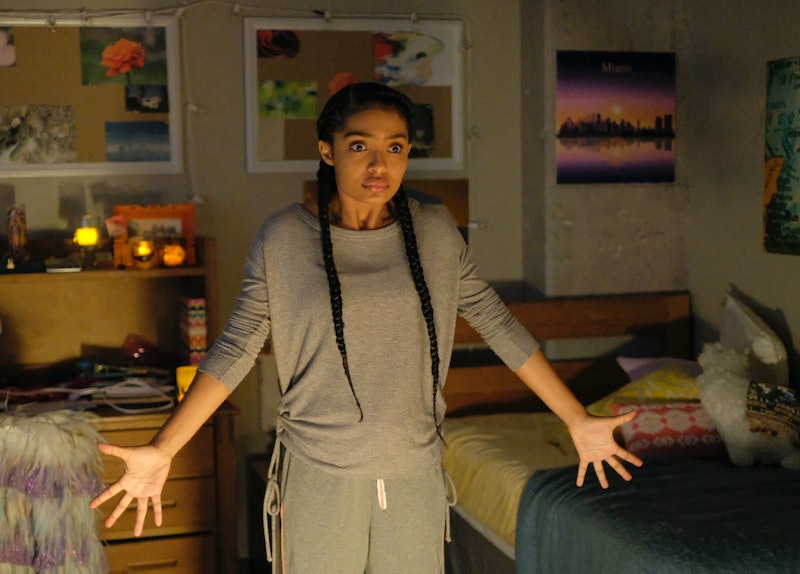 Breakups are the absolute worst — especially when you’re Zoey on grown-ish (episode writer: Kara Brown) and you nearly lost your friends and dropped out of school for love. Zoey, still mourning her breakup with Cash, is found by her friends — un-showered, in bed, covered in Dorito dust, and watching sappy Diane Lane movies on loop — in the episode "Un-Break My Heart." They urge Zoey snap out of it and remind her that Cash wasn't in his dorm crying over her — though, according to science, that may actually not be true. Do men really get over break-ups faster than women?

Turn on any rom-com or show that involves a breakup and you’ll most definitely find the woman wallowing between a couch cushion and a pile of tissues, while her former flame is out getting drunk and having a fun time with his friends completely unscathed by the loss of romance. To many this stereotypical trope translates into men never having actually cared about the relationship or just being able to move on faster. And while it’s true that women take breakups harder at first, according to one Binghamton University study, in the long run, the same study found that women recover more fully than men.

The study asked participants to rate the emotional and physical pain of a breakup on a scale of one (no pain) to 10 (unbearable). The results were that women had higher levels of emotional pain from breakups, averaging a rating of 6.84 versus 6.58 in men. As for physical pain, women averaged 4.21 versus men’s 3.75.

But despite the high levels of anguish women reported at first, the study concluded that they would recover more fully and come out emotionally stronger in the end. Some male respondents, on the other hand, never fully recovered from the loss of love — they simply just moved on.

“[A] man will likely feel the loss deeply and for a very long period of time as it ‘sinks in’ that he must ‘start competing’ all over again to replace what he has lost [in a relationship] — or worse still, come to the realization that the loss is irreplaceable,” lead author on the study Craig Morris said in a press release.

This means that Zoey won't be the only one drowning her sorrows in pints of Haagen Daas. While Cash might have seemingly moved on to dating Zoe Kravitz for now, he’ll eventually come to regret leaving the girl who tutored him, worked for free as his stylist, and allowed him to use "your" instead of "you’re" in text messages without judgement — a.k.a. Zoey.

But while her friends are wrong about Cash not feeling the emotional turmoil of a breakup, they are right about one thing: cyberstalking and remaining friends with an ex you're still hung up on is a total no-go for moving on. In fact, a study in the Journal Of Social And Personal Relationships found that people who give in to this temptation have more negative feelings about their exes, miss them more, and feel more distress over the breakup.

Fortunately, Zoey eventually comes to realize this and understands that deleting Cash's phone number is the best move for her wellbeing. And while it will definitely take some time for her to fully move on from as long as Zoey keeps hanging out with her friends and focusing on getting that Teen Vogue fellowship (because what ever happened to that?), she'll recover from the breakup just fine.

And luckily, whenever Zoey does bounce back on grown-ish and is ready to date again, she'll have someone right there waiting. Because let's be honest: Aaron is totally in love with her.