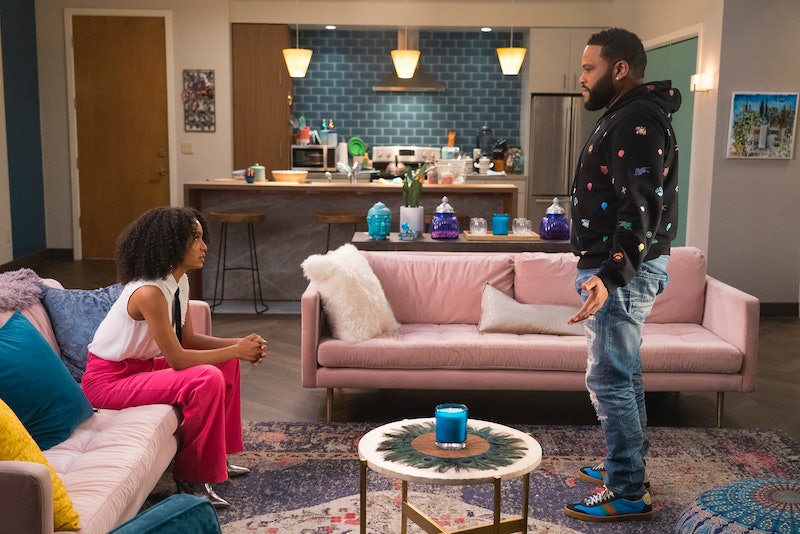 Has Dre's golden child officially tarnished her reputation? Given that Zoey's dad cut her off on the spring finale of grown-ish, titled "Face the World," it seems that may, indeed, be the case. The March 6 episode allowed for a lot of reflection — literally. Looking in a mirror at one point, Zoey asks herself, "Who are you?" after lying to her "emo" dad and, more importantly, cheating on her chemistry final. And she wasn't the only one wondering the same exact thing.

Facing "possible expulsion" from Cal U, Zoey had to first go before an academic ethics board, which temporarily included Charlie, who recused himself in what Zoey called "the one time this moron could actually help me." Although Nomi previously advised her to pull the "I do not recall" defense, Zoey seemed to actually begin remembering who she is and admitted her wrongdoing to the panel. That was, of course, thanks, mostly in part to seeing visions of her dad thinking of his dissapointment if she didn't "fix this."

The Freeform series once again brought in the mirror symbolism as Zoey awaited her fate. Staring at her reflection, she realized that the real consequence of her actions had less to do with facing the ethics board (that eventually punished her with academic probation) and more to do with facing herself. And, as she noted: "The truth was, I didn't like the person I was becoming." So it seems, then, that our young Zoey may not have lost her way, after all.

So did she get away with it all? Although she seemed to think so for a brief moment, even ordering food delivery for her and Luca to celebrate that she "beat the system." Her relief was short-lived, however, and her true "what the pho?' moment came when she opened the door to find, not a Vietnamese delivery guy — but two mirrors she couldn't avoid: Dre and Pops. (Leave it to Charlie to throw Zoey under the bus.)

Then came that question again. "Who are you?" Dre asked her more than once. Pops, of course, didn't think the cheating was that big of a deal (he was hilariously more taken aback by a kimono-clad Luca lounging in his granddaughter's college apartment), but Dre was not letting this one go.

To make the already-bad matters worse, Dre, who admitted he may have made Zoey's life "too easy," also discovered Luca's joint — and that was the last straw. "I've seen enough Zoey, I'm done," he told his beloved daughter. "If you want to stay at Cal U, great. But this lifestyle, I can't bankroll anymore. I'm cutting you off, Zoey."

Wait, what? Apparently Zoey can do wrong in his eyes. So, now, at this, point, as she felt her life "unraveling" and that she was both "on the verge of a nervous breakdown" and that she'd "hit rock bottom," nothing else could really go wrong, right? After all, what's lower than rock bottom?

Enter Aaron. The drama with Dre had just caused Zoey to blow off the conversation where her "literal ride or die" Ana was finally going to admit that she and Aaron had been hooking up — only Aaron didn't get the memo that said convo didn't take place. Cliffhanger alert: After Zoey mentioned having just been blindsided by something, he assumed it was about him and Ana and began to spill the beans.

While Zoey will almost certainly find a way to stay at Cal U, there are now so many questions. How will she afford it? What role with Aaron's confession about Ana factor into her decision to stay or leave? Did Pops really keep Luca's kimono? (OK, maybe not the last one so much.)

With bombs dropping on Zoey left and right, it seems her growing pains may have only just begun.