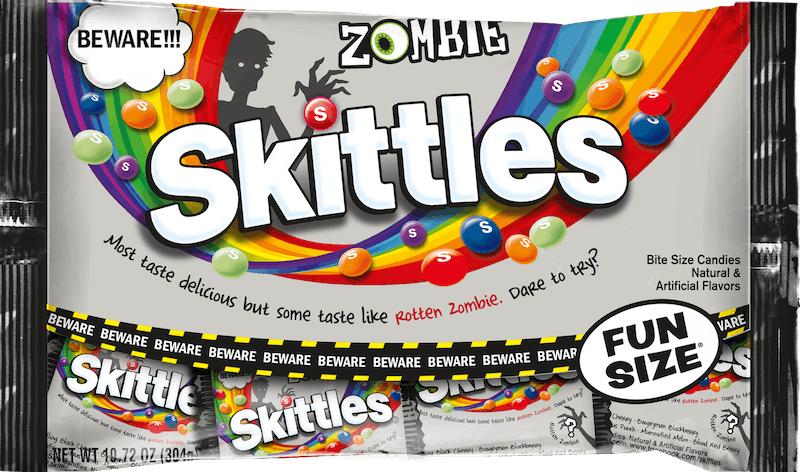 When it comes to movie theater candy, Skittles are one of my go-tos — but I might think twice before bringing the latest variety into a darkened cinema with me. You see, Zombie Skittles, which are coming in 2019, aren’t your standard, everyday Skittles; they’re… special. Because scattered amongst all the little fruit-flavored niblets in each bag are a few pieces that purportedly taste like actual zombies.

You heard me: Zombie-flavored candy.

As far as food gimmicks go, that one is pretty creative.

According to Skittles parent company Mars Wrigley, the undead version of this classic sweet will launch in time for the 2019 Halloween season — so naturally, one of the sizes in which they’ll be available will be fun-size packages perfect for trick-or-treaters. Other sizes available will include share sizes (four ounces per bag) and “laydown bag” size (14 ounces); they’ll be priced between $1.89 and $2.99.

Most of the Skittles in each bag will come in fruit flavors — that is, they’re pretty standard, taste-wise, even if their names have been somewhat spookified: Instead of regular old Citrus Punch, Melon, Blackberry, Black Cherry, and Berry, the flavors are called Petrifying Citrus Punch, Mummified Melon, Boogeyman Blackberry, Chilling Black Cherry, and Blood Red Berry.

You will also occasionally come across a different flavor Skittle. These Skittles will look just like the other Skittles — but they won’t taste like them. Oh no.

No wonder they’re scheduled to come out around Halloween.

Like many, the moment I learned about the gimmick involved with the Zombie Skittles, my brain immediately jumped to making all sorts of Harry Potter-fueled, Bertie Bott’s Every Flavour Beans comparisons between the two. And, to be fair, they are quite similar; both of them involve tiny, bite-sized sweets that sometimes taste horrifying instead of delightful. But I’d actually argue that the Zombie Skittles are more like a different gimmicky jelly bean variety — which, incidentally, is made by the same company that brought Bertie Bott’s beans to life in the real/Muggle world: Jelly Belly’s BeanBoozled jelly beans.

There’s a reason I’ve never dared to open the single package of BeanBoozled beans I was once give as a gag gift: I'm just not brave enough.

It’s true that with the Zombie Skittles, there are fewer flavor options; BeanBoozled jelly beans feature 10 pairs of similar-looking beans for a total of 20 flavors, while Zombie Skittles has only six flavors total, five of which are perfectly normal. The general idea is the same, though — disgustingness disguised as deliciousness makes eating a bag into a sort of game. A weird, twisted game, but a game nonetheless.

Are you ready to play?

Look for Zombie Skittles on shelves around Halloween 2019. Get those machetes ready!