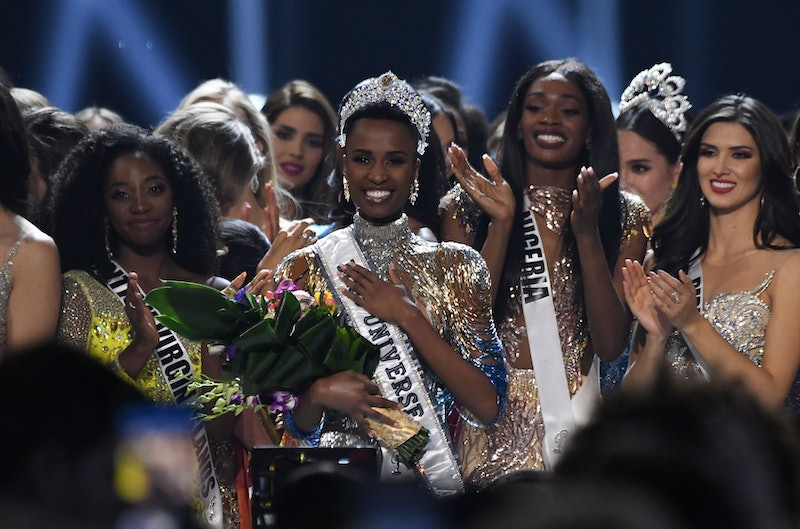 On December 8, Zozibini Tunzi of South Africa was named Miss Universe. In the final question about what we should be teaching young girls today, posed by host Steve Harvey, Tunzi spoke on creating a society that allows young girls to seek out leadership roles and to "take up space." Now, reflecting on Sunday's win and that viral message, Tunzi shares her experiences taking up space as a woman and as a leader, exclusively to Bustle.

I was a very shy child. Growing up in a village in South Africa, we stood for humility, kindness, and recognizing people for who they are and the things they have to offer the world. But when it came to my own confidence, I came up blank most of the time because I was so scared, even though I knew that I had so much to say and that I had so much potential. I found it difficult to speak my mind and speak up.

In the first few days of the Miss Universe competition, I had what I now know was imposter syndrome. Coming to the competition, meeting the other women, hearing their amazing stories, even looking at their beautiful photos every day on Instagram, it got into my head. Thanks to that imposter syndrome, I was constantly asking myself, "Do I really belong here? Should I be here?" I was overwhelmed and tried to shrink myself. Maybe these people will not like me.

One day when I was in my head, feeling small, another woman came to me and asked me if I was OK. "You're not looking like yourself today; what's happening?" she asked. And I thought, You know what, I just need to be honest with her. So I told her I was feeling down. "I don't know why," I said. "I woke up today just feeling some type of way... needing a little bit of confidence."

She reminded me that I was not alone. I was surrounded by 89 incredible women — everyone at one point was going to feel like that. But it was important to remember that we were all there for different reasons. We all look different, we all play different parts, and I had to believe in myself. I needed to believe in my power.

So that's what I did. I activated back into my power.

I did get some help from Beyoncé. I listened to "Brown Skin Girl" a lot — it was my jam for the entire competition. It's a song about confidence, one you don't have to be a brown-skinned girl to identify with. You just have to listen to the message and what it says to women about coming into our own and accepting ourselves, loving ourselves.

In the first few days of the Miss Universe competition, I had what I now know was imposter syndrome.

I have been able to experience the power of women my entire life. My three sisters taught me how to embrace women, how to be around women, and to see how magnificent we are. They gave me such a worldly view of how different, but powerful we can be. My amazing mom is a school principal. My grandmother, who never had an opportunity to go to school, gave me my first ever book to read, Long Walk to Freedom by Nelson Mandela.

But honestly, that's still not how young girls are being brought up. We're always told we must be seen, not heard. And as I grew up, I realized that I have actually been depriving myself, and possibly the world, because anyone who has ever tried to be somebody in the world, to do great things, was not shy about it. Women have so much to share, and we need to start teaching young girls to take up space when they walk into a building. To not shrink themselves — whether it be as a child or as Miss Universe. To walk into a space, own it, and show people that women are the leaders we're looking for today.