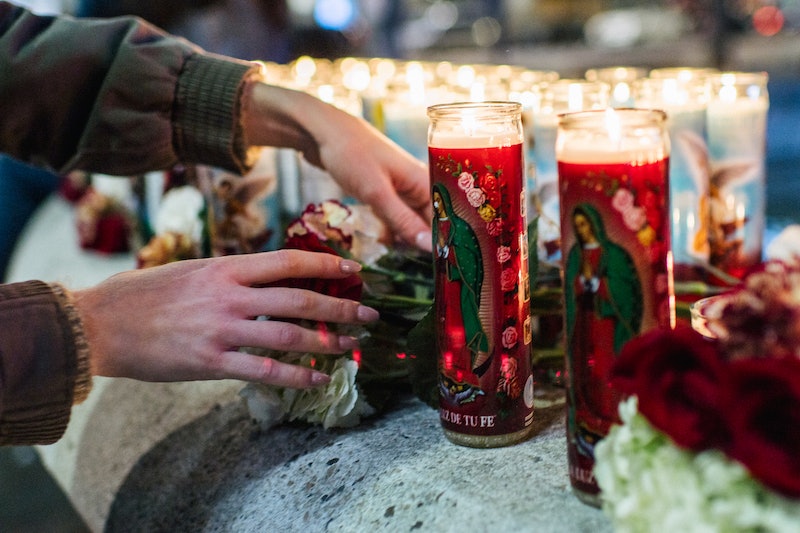 Though until 2020, no federal executions had taken place since 2003, the Trump administration has moved to carry out the death penalty in a number of cases before the president leaves office in January. The Dec. 10 death of Brandon Bernard, 40, who had publicly admitted remorse for the crime he'd committed at age 18, unleashed a wave of emotion around the death penalty, which President-elect Joe Biden has pledged to end. Many people reacted strongly to the case on social media, and are pushing for more action against capital punishment: a petition to stay the execution of Dustin John Higgs has gained over 840,000 signatures in four days. If you want to take action, the fight to end the death penalty needs support and resources to succeed.

Attorney General William Barr defended the administration's push in a Dec. 7 interview with the Associated Press. "If you ask juries to impose and juries impose it, then it should be carried out.” A 2003 Gallup poll suggested that those who favor the death penalty in murder cases do so because they believe it "fits the crime." But opinions are changing. In 2019, for the first time since 1985, a majority of Americans told Gallop that life imprisonment without parole was a better punishment for murder than the death penalty, though 56% were still in favor of capital punishment.

As of 2020, 22 states have outlawed the death penalty, according to the Death Penalty Information Center, but the federal government can still carry out sentences. People in favor of abolishing the death penalty cite the fact that the practice carries a high risk of executing innocent people and is disproportionately applied against people of color: since 1976, 295 Black people have been put to death for killing a white person, compared to 21 white people convicted for killing a Black person, per the Death Penalty Information Center. And in September, the Center noted that 34 of the 57 people on death row are people of color.

If you're angry that the death penalty is being pushed during President Trump's last weeks in office and want to make your voice heard, the seven below organizations working to end the death penalty could use your support.

Equal Justice USA was founded in 1990 to reform the justice system from the bottom up, to make it focused on healing rather than punishment. The organization was part of successful campaigns to end capital punishment in nine states, and calls the death penalty "the ultimate failure of a system that fails the most vulnerable people." You can support them through signing petitions, donating, or becoming part of their mailing list.

The NCADP is the country's oldest anti-capital punishment non-profit, founded in 1976. It brings together more than 100 other organizations from across the country to fight for the end of the death penalty. It takes a state-by-state approach, lobbying state officials, starting petitions, and educating people about the death penalty. They'll help you draft letters to your state politicians, join local groups, and educate others.

Journey Of Hope is led by family members of murder victims, who campaign for the end of the death penalty through speaking engagements, rallies, and demonstrations. Its founder, Bill Pelke, campaigned for clemency for Paula Cooper, who murdered Pelke's grandmother at the age of 15; with the support of 2 million people, including Pope John Paul II, Cooper was removed from death row in 1989. You can invite a speaker, or donate to their efforts via PayPal.

The American Civil Liberties Union (ACLU) has been campaigning against the death penalty for decades. In 2020, it's working to help the people on death row targeted by the Trump administration, including Lisa Montgomery, who is the first woman scheduled for the death penalty in the U.S. since 1953, by filing injunctions and taking appeals to higher courts. You can support them in multiple ways, from a quick donation to organizing local events or volunteering.

If you've seen Just Mercy with Michael B. Jordan, you'll already recognize the Equal Justice Initiative (EJI), who've been working to reform the justice system for decades. The EJI works with people on death row, giving them legal representation and support, and does extensive campaigning to end capital punishment entirely. They also fought and won a case in the Supreme Court protecting people with dementia from capital punishment. You can donate, host educational events or get involved with local organizers, or visit its Legacy Museum, which addresses racial injustice in the U.S.

Witness To Innocence is an anti-death penalty non-profit whose speakers and campaigners are exonerated death row survivors. They testify before politicians and on speaking tours to educate the public about wrongful convictions. You can invite their speakers to your area, or send donations via their website.

Amnesty International's U.S. chapter supports the push to ban the death penalty in every state, as part of their global commitment to end capital punishment everywhere. They make pleas for clemency for prisoners, campaign for political change, and publish annual reports on executions worldwide. You can donate, purchase merchandise, volunteer, or lead a local action group.