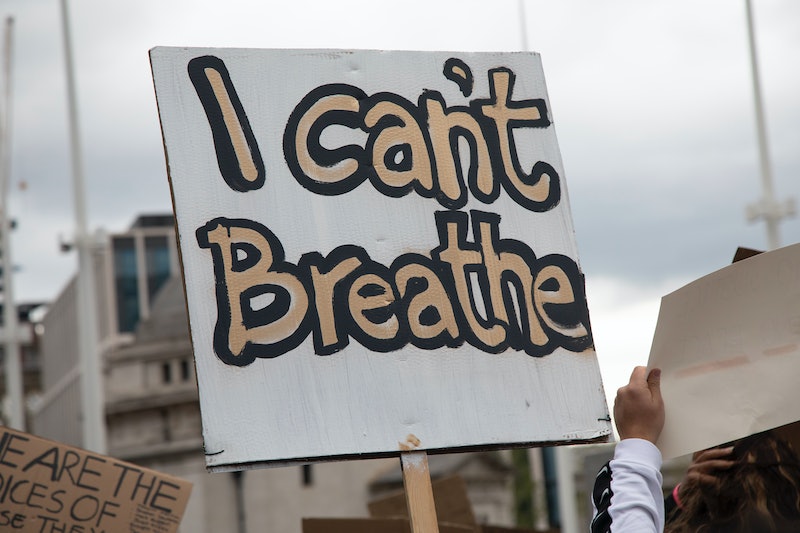 Protestors across the U.S. have been calling for racial justice since well before the 2020 police killing of George Floyd, but social media today allows anyone to chime in on discussions about race. You might find yourself getting into some tough conversations right now, particularly with people who respond to "Black Lives Matter" with an indignant "All Lives Matter."

It can be tempting to just walk away, but being anti-racist means doing the work to show other people why their ideologies are harmful. "The All Lives Matter sentiment needs to be nipped in the bud," Maryam Ajayi, the founder and CEO of diversity platform Dive In Well, tells Bustle. "People need to understand, do the work, and embody the liberation of Black lives."

"The problem with the ‘all lives matter’ retort to ‘Black Lives Matter’ is not that we don’t agree with the principle that all lives matter," john a. powell, director of the Othering & Belonging Institute at UC Berkeley, tell Bustle. "All lives should matter. We all have a stake in supporting our shared and collective humanity. As the pandemic has shown, every person’s health and well-being is intimately bound together." He notes that the phrase "Black Lives Matter" can make it sound as if equality and justice is a zero-sum game, where one group's benefit comes to the detriment of another.

That's where the backlash comes in — but it's incorrect. Here are six common "all lives matter" arguments, and how to respond to them in an anti-racist way.

Everybody's life does matter. But in America, Black lives are too often treated as disposable, unimportant, and of less value than those of their white peers.

"When one asserts 'Black Lives Matter', it is not suggesting that Black lives should be or are more important than all other lives," Waldo Johnson Jr., Ph.D., an associate professor in the School of Social Service Administration and faculty affiliate with the Center for the Study of Race, Politics and Culture at the University of Chicago, tells Bustle. "Instead, it is simply pointing out that Black people lives are relatively undervalued in the U.S. This is not a belief; it is supportive by multiple centuries of racial bias, discrimination, and ill-regard for Black humanity. Black lives are more likely to be ended by the police and the country needs to recognize that inequity to bring an end to it."

Argument #2: But wouldn't "All Lives Matter" be more inclusive?

"The phrase 'Black Lives Matter' is an inclusive assertion," Johnson says. "By countering with 'All Lives Matter', one misinterprets or completely misunderstands what the original phrase means." People who respond in this way, he says, are likely looking at the phrase as if the speaker is saying only Black Lives Matter, which means they belittle its importance. Black Lives Matter has an implicit "too" at the end: Black lives also matter, and be treated as others are.

The point is that American society privileges white people over Black and brown people in myriad ways, and the decades-long caustic relationship between police and the communities of color they're meant to serve is a prime example. It deserves specific, pointed, and unapologetic recognition, not artful avoidance wrapped up with derailing tactics.

"The problem with All Lives Matter is that it operates on the myth that all racial groups are situated similarly, and it resists efforts to improve the position of Black people specifically, who have been struggling for 400 years under the weight of anti-Black racism to belong in this country, and to have our humanity seen," powell says.

Argument #3: Well, nobody is arguing that Black lives don't matter.

Consider the backlash that arrives whenever there's a high-profile police shooting or killing caught on video. Media outlets often concern themselves with the victim's background, rather than talking about the circumstances of the death itself or questioning the use of police violence. It's a little like the media focus on looting during the protests right now, rather than the hundreds of peaceful demonstrations that are far more common.

It's not hard to see how Black lives are treated differently from white ones. "While whites might be concerned about being mistreated by the police, I have not heard of a white person saying they were mistreated or attacked because of their whiteness," powell says. "When you say 'all lives matter', you are making a statement based on the false perception of a post-racial society. And by denying the reality of where racial groups are situated, that statement in effect promotes the maintenance of structures built on a foundation of white supremacy."

Argument #4: But saying "Black Lives Matter" frames this as a Black vs. white issue. Doesn't this ignore Black-on-Black crime?

The issue of so-called Black-on-Black crime ― especially when it's raised by people who don't express any interest, motivation, or desire to prevent Black death in any other context ― is perhaps the most offensive and most easily dismissed card in this entire discussion.

Thanks to a number of factors, including housing discrimination, white flight, and the resulting, heavily segregated nature of American life, an overwhelming majority of violent crimes are intraracial ― white-on-white, black-on-black. But that shouldn't matter in this context.

"'Black lives matter' is not targeted to challenge the worth of any other group; it is simply an affirmation of the worth and dignity that Black lives deserve as does any other citizen group," Johnson says. And that includes the idea that in any encounter with police, Black people deserve the same dignity afforded to white people accused of a crime.

When police officers are slain, almost everyone comes together in solemn grief over it, a unity that's often lacking for Black victims of police violence. But unlike race, it is a choice to become a police officer. That white lives matter is a function of the status quo.

“Black lives matter” is about focus, not exclusion," Johnson says. "It reminds us to recognize and confront racism and racial violence." The more compelling case would be when a group similarly subject to oppression and state violence borrows the phrase, as has happened in the case of Native Lives Matter. This hasn't proven nearly as controversial, and the reason seems pretty clear: Native Americans experience similarly abysmal treatment in America. And those modern-day violations and indignities are rooted in deep historical atrocities that should haunt the country to this day.

Argument #6: What about other minorities? Why aren't they being given the same attention?

While this particular moment is centered on Black lives, powell uses the example of other minorities who face discrimination to explain why Black Lives Matter is so powerful. "Consider a statement that women managers in the workplace should be treated with respect," he says. "One could say all managers in the workplace should be treated with respect. While the second statement may be true, it ignores the situation that women are much less likely to be accorded respect in the formal workplace." The same applies to saying gay people shouldn't be attacked; while no person should be attacked, LGBTQ people face a disproportionately high risk of violence (including from the police) based on their identity.

"Our practices and norms, at one time, were explicitly designed on the basis some people matter, and others don’t," powell says. And that means everybody matters — despite existing in a system which privileges some kinds of life and experience over others.

If the argument's going poorly, it can be time to step away. Ajayi says that sometimes responding to All Lives Matter rhetoric can be a waste of your time. "Don’t argue," she says. "Instead, spend your energy supporting and amplify Black people in the Movement doing the work for Black Lives Matter." powell, meanwhile, advocates a process called bridging. "We want to engage with other groups and we are willing to hear their stories and their suffering," he says. "Their humanity is not called into question, even if we come from different backgrounds and don’t always see eye-to-eye. We can all still be part of a shared fabric." And that means respecting experience and understanding prejudice — and how deeply it lowers the value of Black life in America.

More like this
5 Concrete Ways To Take Action Against The Rwanda Deportation Plan
By Rachel Mantock
Windrush Victims Are Still Waiting For Compensation
By Sam Ramsden
17 Powerful Photos From March For Our Lives Protests Across The U.S.
By Michelle Toglia
6 Abortion Advocates To Follow On TikTok
By Sara Youngblood Gregory
Get Even More From Bustle — Sign Up For The Newsletter

This article was originally published on July 8, 2016