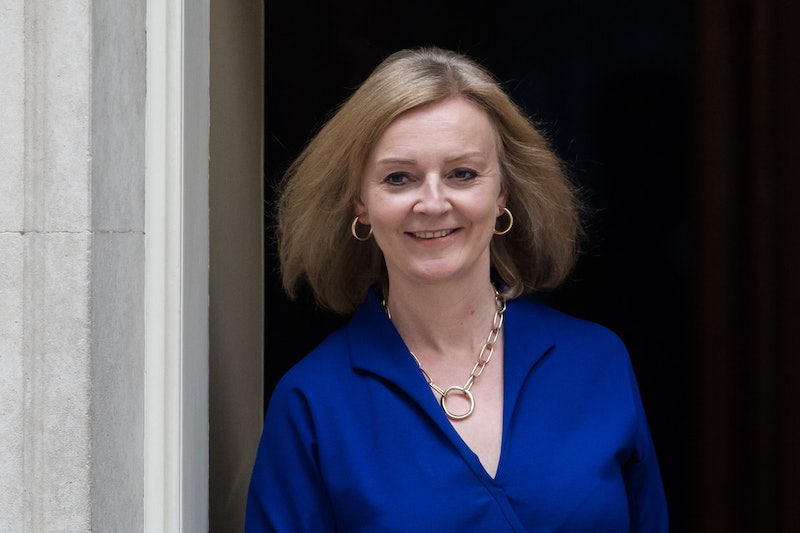 Following a Cabinet reshuffle by Prime Minister Boris Johnson on Sep. 15, 2021, former International Trade Secretary Liz Truss has been promoted to the role of Foreign Secretary. Taking over the role from Dominic Raab, who is now the Justice Secretary and Deputy Prime Minister.

No. 10 has said that Truss received the new title due to her “brilliant job as trade secretary” where she “secured great deals and has been a fantastic representative for the UK around the world.” As the UK’s second female foreign secretary, she will also retain her title as the Minister for Women and Equalities.

Despite being given quite an important role in government, Truss doesn’t exactly have the best track record. She’s also pretty well recognised as a meme on social media, following a very passionate speech about cheese and other British food in 2014. So here’s everything you need to know about Liz Truss, and how she came to be a significant member of the British government.

Raised by “left-wing” parents, Truss was born in Oxford in 1975. She and her family moved to Paisley, Scotland when she was four-years-old before moving again to Leeds where she attended Roundhay School. Truss would later attend Merton College in Oxford, where she studied philosophy, politics, and economics. According to BBC News, she was involved in student politics during her time in Oxford, initially among the Liberal Democrats before moving to the Conservatives.

Before entering Parliament and becoming an MP, Truss worked at Shell on a graduate scheme with a focus on “project economics and contract negotiation.” She also worked in a similar role for Cable & Wireless, according to the Daily Mail.

Prior to entering Parliament in 2010, Truss was the Tory candidate for Hemsworth and Calder Valley in the 2001 and 2005 general elections. She was elected councillor in 2006 for Greenwich, and worked as a deputy director for the Reform Think Tank in 2008. Eventually, she settled into life as a Conservative MP for South West Norfolk under David Cameron’s government.

Her Many Roles In The UK Government

Since becoming an MP, Truss has held many positions of power in the UK government. In 2012, Cameron appointed her with the role of Education Minister, which she held for two years. She was then promoted to Environment Secretary in 2014, where she branded solar farms as a “blight to the landscape” and planned to cut subsidies for them.

Following a Cabinet reshuffle in 2016, Truss was given the role of Lord Chancellor and Justice Secretary. Despite only holding this position for a year, she garnered some controversy within the Conservative party due to her lack of support for the judiciary following a report by the Daily Mail. The Lord Chief Justice told MPs that Truss had been “completely and absolutely wrong”, and it was her duty to defend the judges who were branded “Enemies of the people” by the Daily Mail following Brexit talks.

Truss subsequently became Chief Secretary to the Treasury in 2017, before serving as the International Trade Secretary from 2019 to 2021.

During her tenure as Environment Secretary, Truss gave a memorably awkward speech at the 2015 Conservative Party conference in 2015. Her excitement for British food products became the subject of many memes, especially her passion for cheese. A few moments later, she exclaimed that she’d be travelling to Beijing to open pork markets then paused to grin at the audience for a dramatic pause.

As the Independent notes, the memes kept flowing at the following conference in 2016, when Truss called for children to be educated on the “proper names” for animals and trees. This led to a plethora of memes, including this gem by one Twitter user:

The Collapse Of The LGBT+ Advisory Panel

During this period, she was also appointed as the Minister for Women and Equalities, where she has a responsibility for “developing an equalities policy that it is based on individual autonomy and dignity” and “promoting equality of opportunity for everyone.” However, Truss came under scrutiny in May 2021 following the collapse of the government’s LGBT Advisory Panel, which was set up in 2018.

As Pink News reports, several members resigned due to the Conservative party allegedly creating a “hostile environment” for LGBT+ people across the country, and criticised Truss for the way she and fellow equalities minister Kemi Badenoch were dealing with the issue of conversion or cure therapy.