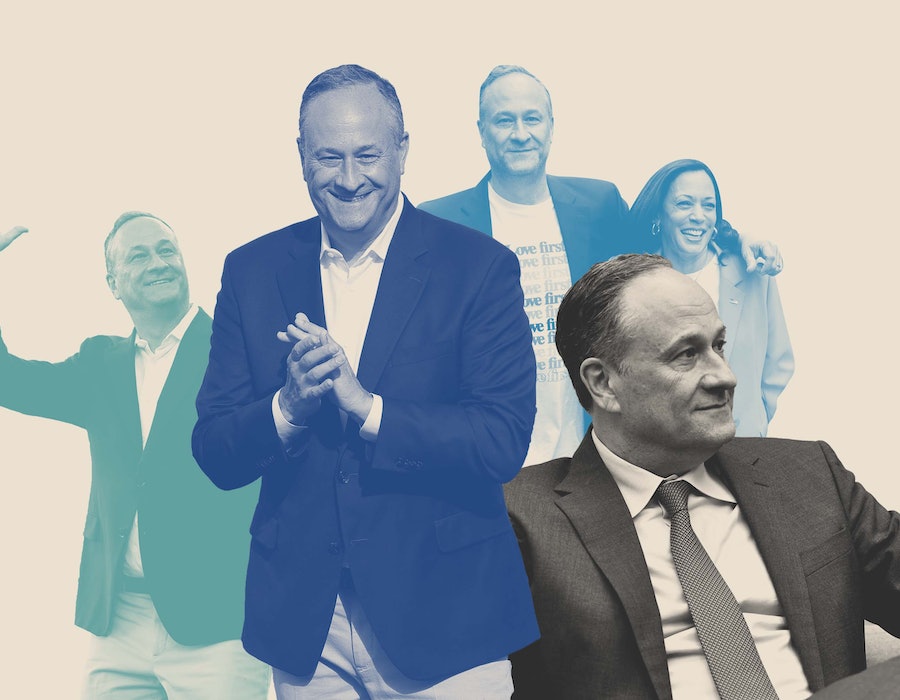 You don’t often hear that there need to be more men in the picture. But when it comes to the company Doug Emhoff keeps, it’s actually the case. The second gentleman recently traveled to Thailand, where the former lawyer met with other spouses of world leaders as part of the Asia-Pacific Economic Cooperation partner program. Unsurprisingly, he was the only guy in the group.

“I don’t think they quite knew what to make of me,” Emhoff tells Bustle over the phone. “Typically when I’m in situations like that, I am the only man, and I don’t want to be the only man going forward. We need more men in that picture.”

During their day together, which consisted of a tour of the Arts of the Kingdom Museum and a series of meals, the affable Emhoff was able to win over the women. The other spouses even helped the second gentleman select a gift for his wife, Vice President Kamala Harris. “[It was] a purple lotus,” he says. “Kamala means lotus.”

Emhoff has long spoken about the importance of being an ally, but especially since he stepped away from his nearly 30-year law career in 2022 to support Harris full time (a choice he calls a “no-brainer”). He’s been labeled a “wife guy” and compared to stalwarts of spousal support like Ruth Bader Ginsburg’s husband, Marty. But to Emhoff, his allyship is about more than cheeky titles or flattering parallels. In the wake of the Supreme Court’s decision to overturn Roe v. Wade in June, Emhoff believes the need for male activism is more vital than ever.

“Before Dobbs came down, this whole concept of men supporting women was still a big part of what I wanted to do,” says Emhoff, who’d previously organized events like a listening session on workplace gender equity for Equal Pay Day. “But when Dobbs came down, it changed. It [became] even more dramatic how I needed to help.”

Emhoff wasn’t the only member of his family who was outraged, obviously. “I found out about Dobbs from the vice president, who was on Air Force Two traveling to an event. She was so angry. She said something like, ‘Dougie, they actually did it.’” His daughter, model and designer Ella Emhoff — who typically only goes to him for “dad stuff,” he says — texted him furious, as did his 81-year-old mother, Barbara. “[She] said, ‘Honey, you need to do something about this. This is outrageous,’” he recalls. “It just got me so angry. I wanted to channel that rage and anger into action.”

Which is exactly what he’s been doing, both through amplifying Harris’ reproductive rights-centric initiatives as well as pursuing his own. In early December, he spoke at a Planned Parenthood Conference in Washington, D.C. The month before, he attended the Women’s Economic Impact Briefing, where he called on men to join the fight to protect reproductive rights. “I’ve talked to a lot of doctors, medical professionals, and leaders in the medical field, just to really hear about what they claim are ‘unintentional impacts’ of Dobbs,” Emhoff says of his more behind-the-scenes efforts.

In those conversations, he’s heard about issues like widespread clinic closures, life-threatening situations, and how, in some places, the majority of patients now come from out of state. He believes what may appear to be “unintentional” impacts are, in fact, intentional. “I think that’s the point,” he says. “Cruelty is the point. Taking something away, making women feel less than, is the point.”

Although Emhoff knows there’s still a long road ahead in the battle for reproductive rights, he believes the first step men must take in a post-Roe world is to be there for women unequivocally. “There’s a male toxicity problem in general, [as if] anyone who shows empathy, kindness, support is somehow not ‘manly,’ which is frankly just not true,” he says. “What is toughness? Toughness is to take care of your family. Toughness is to be there for others, toughness is to care.

“But you’ve also got to be kind, you’ve got to listen, you’ve got to be empathetic,” he adds. “And somehow in this society, that’s gotten mixed up with being weak. I think that’s being strong. It’s how you lift people up, not how you beat them down, that makes you strong.”

Correction: A previous version of this story misreported the format of the interview with Emhoff. It has been updated.

More like this
At 28, Rosie Perez Risked Her Career To Stop Playing Stereotypes
By Gabrielle Bondi
Watch Jacinda Arden’s Devastatingly Honest Resignation Speech
By Sam Ramsden
Hailee Kaleem Wright's Topsy-Turvy Path From MTV To Broadway
By Samantha Leach
Ashamed Of Your Screen Time Stats? Here's How To Change That
By Alexis Morillo
Get Even More From Bustle — Sign Up For The Newsletter
From hair trends to relationship advice, our daily newsletter has everything you need to sound like a person who’s on TikTok, even if you aren’t.

This article was originally published on Dec. 16, 2022