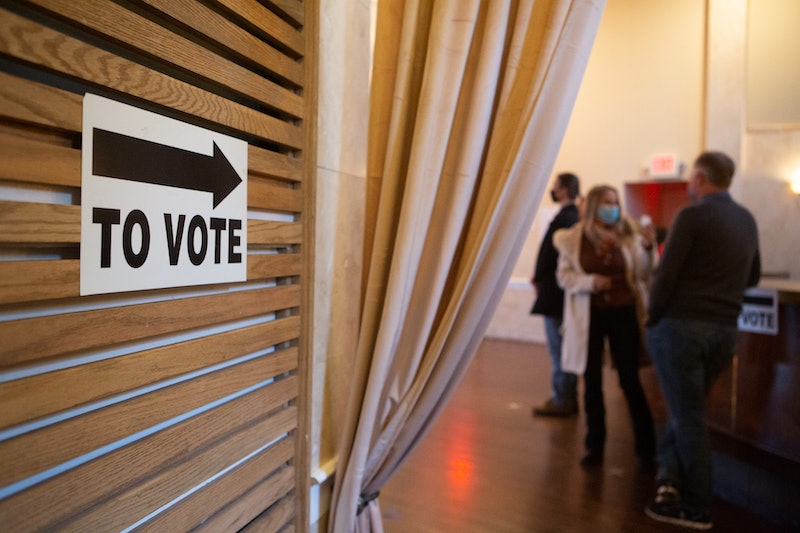 It's safe to say that many Americans are eager to vote in 2020 — it's shaping up to have the highest voter turnout in a century — so before you head to the polls, you'll want to get an unforeseen roadblocks out of the way. One easy thing you can check at home? Your voter status, and whether or not you can vote if your status is inactive.

First thing's first — head to the nonpartisan website CanIVote.org and use their dropdown menu to select the state where you're registered to vote. The process is easy — it will redirect you to a page that prompts you to enter your relevant information and it will tell you whether your status is "active" or "inactive." If you're listed as active, you're good to go — but what steps do you need to take if your status is inactive?

My Voter Status Is Inactive — What Does That Mean?

if you're wondering why your status has been changed to inactive, it's either because you haven't voted in the last few elections, or you haven't verified your address with your local Board of Elections, depending on your state. The good news is that you're still a registered voter and therefore the process will be easier than registering to vote at the last minute (which, regardless, you can do at your polling place on Election Day in 21 states).

State mark people as inactive because they're trying to keep track of where voters live, to make sure they only vote in the area where they actually reside, per the National Conference of State Legislatures. It's designed to keep voter lists accurate, and to stop people voting multiple times at all the places where they used to live.

How Do I Make Sure My Voter Status Is Active?

Depending on your state's voting laws, restoring your status may be a hassle or it can be dealt with quite easily when you arrive at your local polling location — and luckily, most states fall into the latter category. Certain states make it as easy as possible for inactive voters to cast their ballots — for example, inactive voters in Massachusetts, California, Florida, and many other states may restore their status to "active" on Election Day as long as they present identification and fill out a form confirming their addresses when they arrive at the polling station. Since it's always better to be safe than sorry, you'll want to bring a recent utility bill, rent receipt, or copy of your lease in addition to your ID. The address on your ID should match where you're voting.

It's going to be super busy at the majority of polling stations across the country, with long lines due to social distancing, so it will make it easier on you and the workers if you bring ample proof that you are registered, you reside in the station's precinct, and have the right to become "active" again in time to cast your 2020 vote.

However, there can be some frustrating roadblocks. For instance, you might be permitted to vote, but your vote will be classed as "provisional" or "affidavit," meaning it won't be counted on Election Day itself. Votes are declared provisional if there's some sort of doubt about the vote's eligibility — for instance, if you're inactive and bring insufficient ID to the polling station. Provisional ballots are held in a sealed envelope along with the voter's ID information, and the Election Board staff has a certain amount of time to determine whether the vote is legitimate. It changes between jurisdictions; in Washington, D.C., it's 10 days, while in Massachusetts it's 12, according to the National Conference of State Legislatures.

In a battleground state, this could pose a problem if the Nov. 3 results are extremely tight and one candidate requests a recount. (Some of us remember living through the infamous 2000 election, in which Americans waited for days on end as officials counted absentee and provisional ballots in Florida, which was the deciding state that year.) Due to the pandemic and a huge rise in mail-in votes, The New York Times reports that a lot of states won't actually have full vote counts ready on election night, and only nine states believe they'll have 98% of unofficial results by noon on Wednesday Nov. 4.

Because every state is different, the best way to get answers is by contacting your local or state election board. If you're not certain about your status or what you should do, the board can advise you on how best to proceed and ensure that your vote is counted on Election Day.

This article was originally published on Oct. 24, 2016