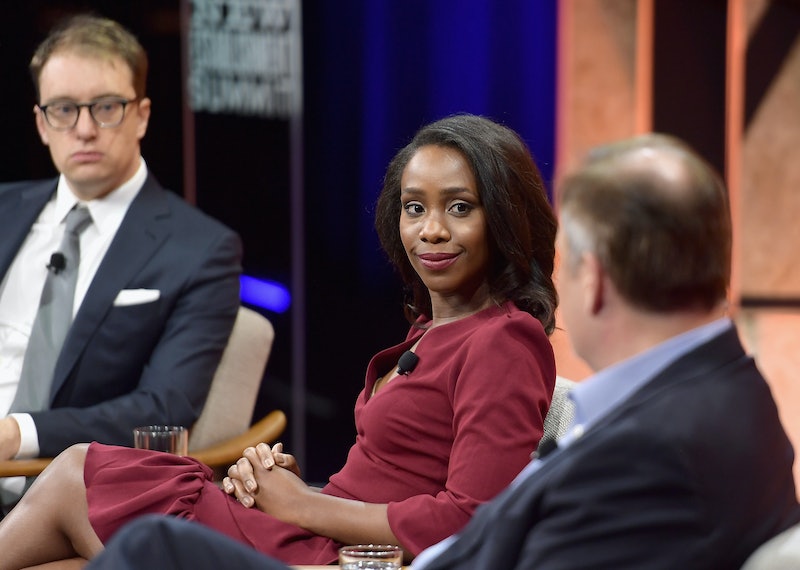 Abby Phillip has had a whirlwind few years. Since joining CNN in 2017 to cover the Trump administration, she's reported from the White House, handled a heated confrontation with the president, moderated a Democratic primary debate, and hopped on the 2020 campaign trail.

Tonight Phillip, 31, will co-anchor the network’s marquee, Election Night in America, alongside Dana Bash, Wolf Blitzer, Anderson Cooper, and Jake Tapper. Together, they'll break down the initial results as they come in, and check in with experts from around the country. (And yes, John King will be returning to his touchscreen wall.) The CNN show is an election-night staple: For the 2016 election, it had the highest cable news rating for primetime election coverage, with more than 13.3 million Americans tuning in. This year, those five anchors will be joined by almost two dozen additional faces reporting, analyzing, and discussing the results.

Ahead of the show's 4 p.m. ET start, Phillip talked to Bustle about how she’s preparing, her research binder, and what she hopes to convey to Americans.

How have you changed your reporting tactics since the 2016 election?

We knew we'd be paranoid about making the same mistakes that people felt were made in 2016. To me, the North Star of political coverage is going to be the actual experiences of voters. When I was covering the Democratic primary and had the chance to be out on the campaign trail, that was always [where] that I put the most stock. When you talk to voters, you find things that contradict conventional wisdom. That's when your ears need to perk up.

Going into this cycle, we need to keep an open mind. We are in uncharted territory in a way that has very little historical parallel, and I don't think that political journalism does very well when there's not much historical parallel. We just need to be comfortable living in that gray area until the votes are counted.

Thinking big picture, how does a network like CNN create an entire program around something that's inherently unpredictable?

This is my first presidential election night with CNN, so I'm seeing the real machinery of this for the first time. Our incredible data team have been going through the polling, early vote, and Election Day vote. There's an incredible amount of raw data. We also have reporters in all of the battleground states who will be talking to us throughout the night. Every person is playing a different role, and I'll be stitching a lot of those things together.

"When you talk to voters, you find things that contradict conventional wisdom. That's when your ears need to perk up."

On a personal level, how do you prepare?

So for several days now, I've been studying. I have my book of research, and we've been doing rehearsals regularly. I'm also a huge data nerd, so I like delving deep into county-level [and] state-level data — to make sure I understand what direction this thing is headed in. On CNN, it'll be, what are the options to get to 270 [electoral votes] for these candidates? And that's about putting together a puzzle of the Electoral College.

What national trends will you be watching for?

The coronavirus. That's going to be a huge part of the conversation. What are the trends of the virus in the places that are the battlegrounds? And then what's happening in the suburbs, with women voters in particular? And the third thing is turnout. We've seen this incredible surge in early voting. What does Election Day turnout look like? In the past, high turnout elections sometimes mean that it advantages one party over the other, but maybe that will be turned totally on its head.

Is there anything else you hope to convey to viewers, aside from the raw data?

We have to wait until every vote is counted, and just because there's a delay does not mean that anything is wrong. We don't need to know the outcome on election night, and we just need to have some patience. I think in this cycle, more than anything else, that's going to be the biggest message.

It's a really pivotal time for democracy in this country, and we're all playing a role. We have a responsibility in the media. We have to make sure people understand that this cycle is different from prior elections. It might take longer for us to get a good representative sample of what's going on in a particular city. That's OK. There's nothing nefarious going on.

More like this
Watch Jacinda Arden’s Devastatingly Honest Resignation Speech
By Sam Ramsden
Jessica Simpson On The Time She Was Pursued By A Backstreet Boy & An *NSYNC Member
By The Editors
At 28, Rosie Perez Risked Her Career To Stop Playing Stereotypes
By Gabrielle Bondi
Hailee Kaleem Wright's Topsy-Turvy Path From MTV To Broadway
By Samantha Leach
Get Even More From Bustle — Sign Up For The Newsletter
From hair trends to relationship advice, our daily newsletter has everything you need to sound like a person who’s on TikTok, even if you aren’t.