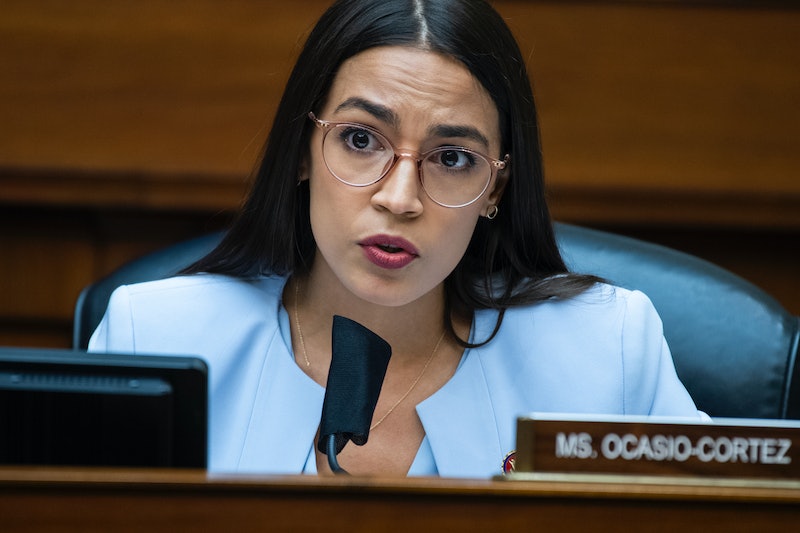 On Monday Feb. 1, Alexandria Ocasio-Cortez shared for the first time that she is a survivor of sexual assault. In a candid Instagram Live video, the US Democratic congresswoman opened up about her trauma, as she said Republicans who deflect blame for last month's Capitol riot are using "the tactics of abusers".

"I’m a survivor of sexual assault," Ocasio-Cortez said in the video. "And I haven’t told many people that in my life. When we go through trauma, trauma compounds on each other."

Speaking to her Instagram audience, Ocasio-Cortez, who represents the 14th district in New York City, spoke about the events that took place on January 6, when rioters stormed the Capitol building in Washington in support of Donald Trump, ahead of Joe Biden’s inauguration. The riots that day left five people dead.

During the chaos of the riots, Ocasio-Cortez described how she ran to the bathroom at her congressional office, and feared for her life when a man stormed in looking for her. "I immediately realised I shouldn’t have gone into the bathroom. I should have gone in the closet,” she said in the video .

“This was the moment where I thought everything was over,” she explained. “The weird thing about moments like these you lose all sense of time... I thought I was going to die.” It became apparent that the man was a Capitol police officer, but Ocasio-Cortez said she and her staff did not know whether the officer was there to "help us, or hurt us".

Ocasio-Cortez, who was re-elected as a congresswoman in November, is a self-described Latinx democratic socialist, and has spoken up multiple times to condemn white supremacy. CNN reports that she received online death threats from one of the pro-Trump rioters who allegedly participated in the Capitol Attack.

Although Ocasio-Cortez did not go into detail about her sexual assault, she talked about the similarities between the two traumas for her, and how difficult it can be when the impact of these events is minimised by others. “These folks to tell us to move on, that it’s not a big deal, that we should forget what happened, even telling us that we should apologise – these are the same tactics of abusers.”

As BBC reports, Ocasio-Cortez went on to say that: "For so many people out there if you have experienced any sort of trauma, like just the fact of recognising that and admitting it is already a huge step. Especially in a world where people are constantly trying to tell you that you didn't experience what you experienced or that you're lying.

"Or that, you know, those are additional traumas on top of what you've already experienced, right, if you're a survivor of abuse, of neglect, of verbal abuse, of sexual assault, you know, etcetera, there's the trauma of going through what you went through.

"And then there's the trauma afterwards of people not believing you, or trying to publicly humiliate you, or trying to embarrass you. And that also gets internalised, too, because a lot of times you don't want to believe it either.

More like this
Watch Jacinda Arden’s Devastatingly Honest Resignation Speech
By Sam Ramsden
The UK Government Is *Finally* Banning Conversion Therapy
By Sophie McEvoy
Jessica Simpson On The Time She Was Pursued By A Backstreet Boy & An *NSYNC Member
By The Editors
Man Meets Politics: ‘Boy Meets World’ Star Ben Savage Is Running For Congress
By Jake Viswanath
Get The Very Best Of Bustle/UK
Sign up for Bustle UK's twice-weekly newsletter, featuring the latest must-watch TV, moving personal stories, and expert advice on the hottest viral buys.