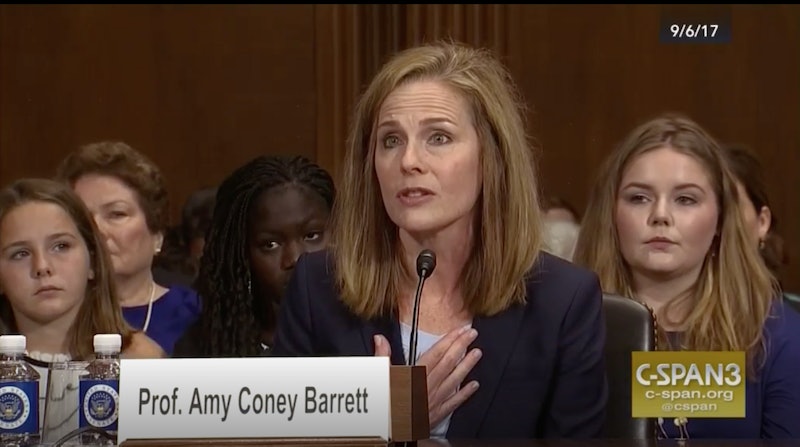 On the evening of Ginsburg’s death, Senate Majority Leader Mitch McConnell said he intended to move forward with the process. “President Trump’s nominee will receive a vote on the floor of the United States Senate,” he said in a prepared statement that night, less than two months before Nov. 3. It upends his precedent from 2016, when he refused to hold hearings for President Obama’s Supreme Court nominee, Merrick Garland, for nearly eight months.

Coney Barrett, 48, is a judge for the U.S. Circuit Court of Appeals for the Seventh Circuit, which oversees Indiana, Illinois, and Wisconsin. She was nominated to the position by Trump in 2017 and confirmed by McConnell’s Senate. In 2018, Trump considered her for Anthony Kennedy’s seat before nominating Justice Brett Kavanaugh. Her confirmation would shift the court to the right, perhaps for decades.

Her nomination appeals to evangelical voters, who Trump likely is aiming to court, given her reliably conservative stances on issues like abortion and gun rights. Much like her former boss, Justice Antonin Scalia, she takes a strong originalist view of the law. (She clerked for Scalia from 1998 to 1999.) If confirmed by the Senate, she would be Trump’s third appointment to the Supreme Court, the most in recent history dating back to Presidents Ronald Reagan and Richard Nixon.

More like this
What The Lionesses’ Win Really Means For The Future Of Football
By Angelina Kelly
Talking About Mental Health In Sport Is Crucial, Says England Legend Karen Carney
By Sam Ramsden
Why Eurovision 2023's Host City Won’t Be Revealed For A While Yet
By Sam Ramsden and Rachel Mantock
Jiu Jitsu Champ Kim Blake Is Pushing For More Women In The Sport
By Kathleen Ferraro
Get Even More From Bustle — Sign Up For The Newsletter