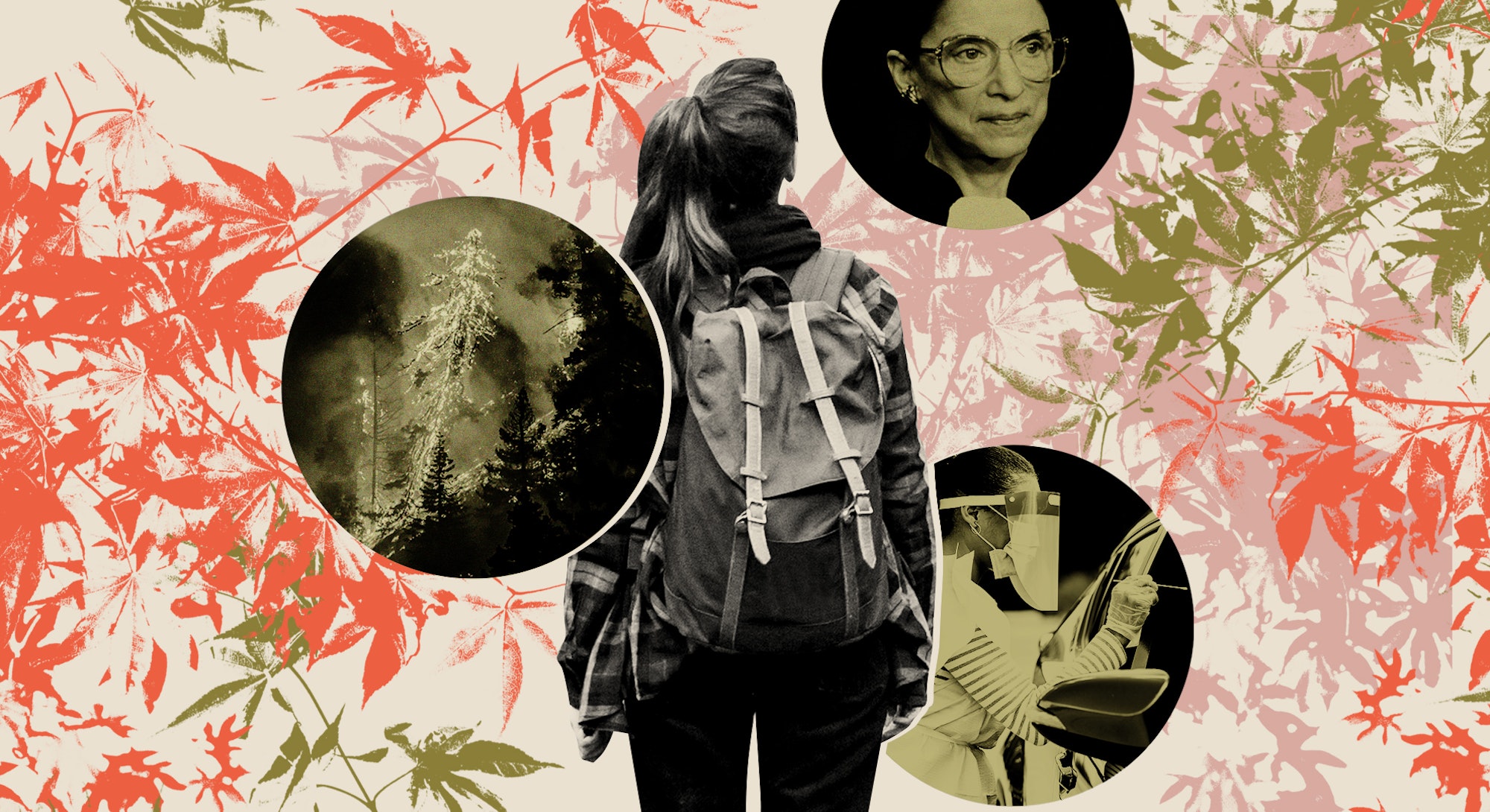 On Saturday morning, after Supreme Court Justice Ruth Bader Ginsburg finally succumbed to the complications of pancreatic cancer, as official COVID-19 deaths climbed to a ghastly 200,000 and meteorologists ran out of names for hurricanes, I woke up to bright sunshine and cool air. The dissonance was uncanny. But not exactly new. It reminded me of the morning of 9/11, when the perfect fall weather uptown felt so disturbingly out of sync with the shock and horror that had just struck downtown. A few days later, it would be just as crisply sunny when a Kentucky grand jury decided that only one of the three officers who broke down Breonna Taylor’s door and shot her dead sleeping at home would be charged, for the “wanton endangerment” of her neighbors’ apartments.

That morning, I took my family’s 5-month-old Samoyed puppy on our usual weekend forest trail, where nothing had changed except a long scarf of leaves turning red. The night prior, Senate Majority Leader Mitch McConnell had promised that a Trump nominee “will receive a vote on the floor of the United States Senate.” It was an unsurprising and cynical reversal on his refusal to allow even hearings for the Obama nominee in 2016 — and a move that will give Trump an advantage in the event of a contested presidential election. As the puppy bounded through wet stones in shallow brooks and raced across pine needle-padded dirt floors, I tried to reckon with what will happen after that. The likelihood that America’s fragile health care protections might be wiped away, along with the assuredness of a safe and legal abortion that my generation thought was a right secured, and the progress on civil rights, already endangered, would be at the mercy of a far-right minority for decades and decades.

At certain points of great terror in American history, mass upheaval and wretched pain was plain for anyone and everyone to see. Bloodied bodies strewn across battlefields during the Revolution and the Civil War; soldiers limping home from war. Or, when the 1918 Spanish flu washed over the country, priests guided horse-drawn carts down streets and called on people to bring out their dead. My father often recounts that nearly every day during the Great Depression, someone would come to his family’s Newark home, hat in hand, asking if there was some chore that could be done, some bit of work to be eked out, and his mother would make the man a sandwich. Even as a young boy, he could recognize the extraordinariness of the moment because it knocked right on their door. Those scenes have stuck with him in the 80-some years since, weathered postcards of communal emotion at a point of societal descent.

I have to remind myself of our current condition as I drive by small restaurants in my suburban hometown that brim with diners for a casual weekday lunch.

These days, unless you or a loved one is feeling their lungs fill with SARS-CoV2's breath-stealing fluid, or staring down an eviction notice or a San Francisco sky stained clay-orange from wildfires, it is altogether possible to think that everything just might be fine. Certainly, the small mobs of citizens protesting mask ordinances or vaccines fail to perceive the danger. I have to remind myself of our current condition as I drive by small restaurants in my suburban hometown that brim with diners for a casual weekday lunch.

In no short order, we Americans are staring down both the worst pandemic and economic collapse in nearly a century, and the terrifying quickening of climate change. Our society is teetering at the edge of fascism, and conspiracy theories equal parts cockamamie and toxic are finding a home in Congress. And yet, for millions, should they so desire, they can simply turn off the nightly news and flick on Sunday Night Football. For all the early pablum about the pandemic being a great equalizer, these crises have befallen the country unequally, and those with less risk of infection or unemployment or overpolicing can tune in and out as schedule allows.

Working from home may be less than ideal, but I’m hearing from people who work in the intersecting worlds of finance and tech that, other than a little short-term belt-tightening, the macroeconomic meltdown hasn’t affected them in the least. The stock market is humming along. Pumpkins are in the markets now and hiking season is about to reach its glorious autumnal peak. I know I am not alone in my feeling of distant perilousness. We are still writing emails, still beginning them “How are you?” We just can’t answer without fumbling, self-conscious caveats — a nervous sigh about “all things considered” or a forced show of gratitude about good health.

To really feel the depths of American horror, some have to log on to Twitter, watch the headlines pile up on top of each other, get pummeled by outpourings of grief and useless canned PR statements. This year, we lost civil rights icons John Lewis and C.T. Vivian, boundary-breaking actor Chadwick Boseman, children’s book author Tomie dePaola, PBS anchorman Jim Lehrer, and comedian Carl Reiner — all of whom had talent matched by heart and humanity. This summer, we watched George Floyd gasp his last breath and Jacob Blake shot in the back — so many years after Eric Garner and Amadou Diallo met similar fates. We found out that a gynecologist with no board certification was gruesomely named the “uterus collector” for performing mass hysterectomies on the vulnerable immigrant women trapped in an Ocilla, Georgia ICE camp. One by one, beloved small restaurants and shops, run by salt-of-the-earth people with small ambitions, are shuttering, the unnecessary casualties of a government with great resources but little care. Despite mighty protests against state abuse and petitions pleading for public assistance, there is little to show for it yet. Only mounting evidence that the structure of violence enacted against the vulnerable has been ossified by decades of propaganda and neglect.

We are still writing emails, still beginning them “How are you?” We just can’t answer without fumbling, self-conscious caveats — a nervous sigh about “all things considered” or a forced show of gratitude about good health.

After initial lockdowns, a summer of protests and plein-air hangs in parks and on porches gave a socially-starved populace a way to feel like involved citizens again. September is normally the time to return to the structure of school and work. Parent friends tell me that they have some relief as day cares, with novel strictures, are reopening and many students are returning to online classrooms and sports with new and peculiar rules (soccer without steals, volleyball with no blocks at the net). But disengagement has rocketed for low-income kids — their struggle is invisible on the Zoom grid altogether. Toilet paper is back in stock, the Emmys and red-carpet looks back on television, but it’s been almost two months since the CARES Act expired and the Senate, with its sights on a Supreme Court nomination, seems altogether uninterested in passing another coronavirus relief package, despite looming evictions and continuing high unemployment. Election Day in November doesn't guarantee that Americans will be heard: Even if the country elects Joe Biden, President Trump — who has already attacked the right to the ballot and the institution delivering them — says he will not commit to a peaceful transfer of power as Trumpist militias roam the streets of Louisville, alarming those who study the fall of democracies.

There’s something dissonant about everyday pleasures in America today, when one cannot help but feel that everything is going inexorably wrong — that we may have reached the limits of the American experiment. Even before McConnell took a scythe to a working Senate and Trump neglected a pandemic that our international peers got under control, America's dysfunction had been decades in the making, operationalized by radical billionaires and a paranoid constellation of right-wing media. Corruption always tainted the ruling classes, but the firehose blast of this administration is dizzying to track, with eight of Trump’s associates convicted, family members entangled in their own schemes. Meanwhile, the Department of Justice has been weaponized to strange political ends, like designating New York City an “anarchist jurisdiction,” by thuggish Attorney General Bill Barr. Just the other day, the president was accused of sexual assault by former model Amy Dorris; it barely made a ripple.

While these fall days are bright with logical and patriotic ideas on how to start fixing our broken republic — if the American people and politicians just have the will! — it’s hard not to feel like a very dark and long winter looms just ahead.