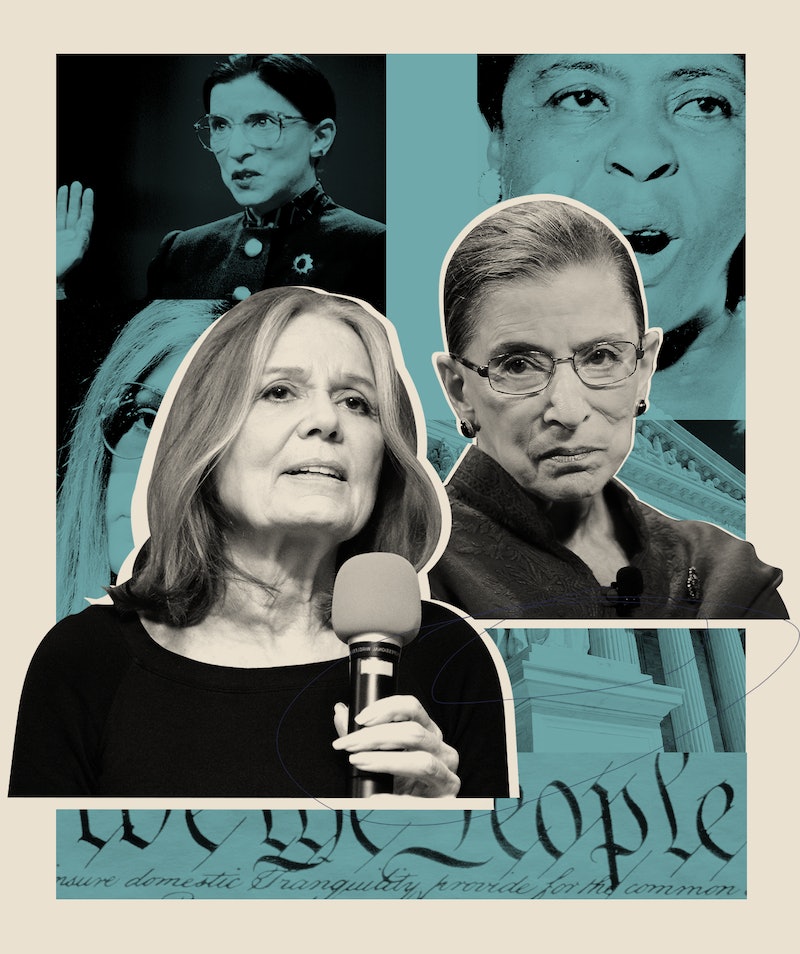 On Friday evening, the honorable Ruth Bader Ginsburg passed away at age 87, on the sundown of Rosh Hashanah, the Jewish high holiday. The Supreme Court confirmed the news, citing complications of metastatic pancreatic cancer. The following day, her feminist contemporary Gloria Steinem sat down for a slog of press interviews timed to director Julie Taymor’s new film about her life, The Glorias.

Amid speculation regarding Ginsburg’s replacement, Steinem reflected on her friend. “I remember walking up the steps of the Supreme Court and realizing that she was only the second woman ever to sit on the court,” Steinem tells Bustle. “She inspired thousands of women to go to law school, and civil rights organizations to include women's rights.”

The two met in the '70s, when Ginsburg was working at the American Civil Liberties Union (ACLU), having recently launched its Women’s Rights Project. “She sent me to Mississippi to interview Fannie Lou Hamer, who had been sterilized without her consent or knowledge when she went into a hospital for another procedure,” says Steinem, who was then a contributing editor at New York magazine. “She was using Fannie Lou Hamer's testimony in the case she was fighting, on behalf of two young women who were threatened with sterilization.”

She was also ahead of her time, Steinem adds, on issues like voter suppression and the eugenics movement. “She was concerned about and fought cases for women's reproductive freedom,” she says. “The laws were very, very racist and sexist. If you were a white, married woman and wanted to be sterilized, you had to have two or three or four children, depending on the state, and your husband's written permission. If you were a Black woman, you were likely to be sterilized without your knowledge.”

Steinem and Ginsburg rose to prominence in tandem. Ginsburg launched the Women’s Rights Project in 1971, when she was in her late 30s. The same year, Steinem launched what would become Ms. magazine, the feminist heavyweight, as an insert in New York magazine. Later, in 1993, when Ginsburg — a longtime Ms. reader — was appointed by President Clinton to the Supreme Court, Steinem was inducted into the National Women’s Hall of Fame.

“Her influence is historic and mind-boggling,” says Steinem, 86. “I mean, there were countless laws discriminating against women that she, because of her presence on the Court, changed. Sex discrimination had been legal and constitutional before Ruth. There were states in which women could be let off jury duty or couldn't work after 10 o'clock at night. ... She was fearless.”

In Jewish tradition, rather than "rest in peace," it's customary to say, "Zikhronah livrakha," a Hebrew phrase meaning, “May her memory be a blessing.” Already, supporters online have adapted it to the present moment: "May her memory be a revolution." And, as Jewish prayers conclude, Amen.