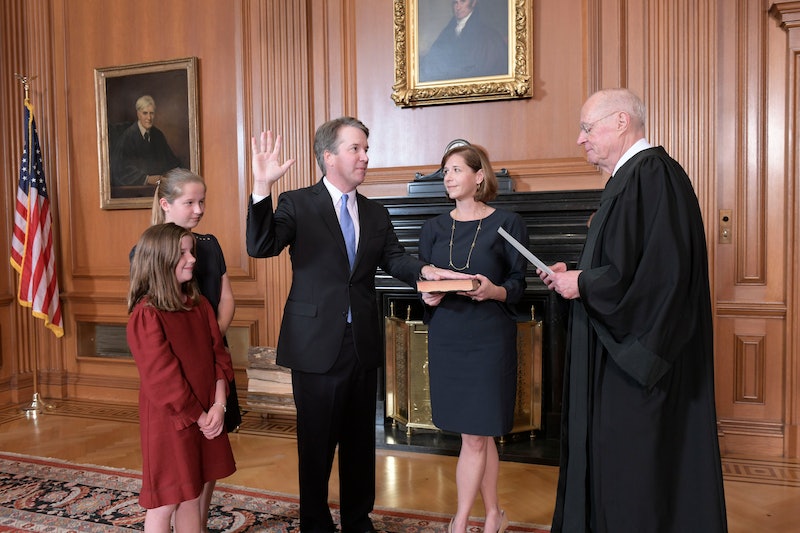 On Friday, Sept. 18, Supreme Court Justice Ruth Bader Ginsburg passed away due to complications of metastatic pancreatic cancer, the Supreme Court said. Before the night was over, Senate Majority Leader Mitch McConnell had already vowed to vote on her replacement before November's presidential election. The hyper-partisan move renewed questions about the Supreme Court makeup and the reason for nine justices.

In 2018, the idea of "court packing" gained favor by some Democrats — that is, increasing the total number of seats on the court to allow a (hypothetical) Democratic president to appoint one or more new justices upon taking office. Court packing gained currency on the left, in large part, as a reaction to the Republican blockade of Merrick Garland, President Barack Obama's 2016 Supreme Court nominee. McConnell refused to put Garland up for a vote in the Senate, blocking his nomination for longer than any other nominee in U.S. history. Many people saw the Garland blockade as a bad-faith violation of basic democratic norms, and consider the seat stolen.

In case you're wondering: Yes, Congress can change the number of seats on the Supreme Court. It would just require passing a piece of legislation through both the U.S. House of Representatives and Senate, which the president would then sign. From a mathematical standpoint, Democrats would only need simple majorities in the House and Senate — and a Democratic president — in order to adjust the number of justices.

Changing the court's structure isn't a new phenomenon. It just hasn't been done in centuries. The Constitution established the Supreme Court, but says nothing about its size. In the 1800s, as the country expanded westward, seats were added to reflect new circuit courts of appeals. The numbers often increased in tandem. (Today, there are 13 circuit courts of appeals.)

During the Civil War, Republicans packed the court, temporarily increasing the number of justices to 10. The Judiciary Act of 1869 returned the court to its current nine-justice system, and the number hasn't changed in the 151 years since. The most recent attempt to deviate from nine justices was in 1937, when President Franklin Roosevelt unsuccessfully attempted to pack the court.