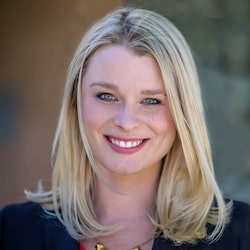 In Palm Springs, Calif., Christy Holstege will be the first openly bisexual mayor in American history. The city doesn't chose its mayor directly, but rather the position rotates through its city council members on an annual basis. Holstege, a current councilwoman, is next in line to assume the role — for which she'll also become to city's first woman mayor.

As a career attorney, Holstege, 34, was inspired to run for office after the 2016 election, ultimately winning a seat on the city council in 2017. This year, her reelection platform focused on issues like supporting residents who are experiencing poverty or homelessness, expanding affordable housing, and supporting the city's tourism economy through the COVID-19 pandemic.

And yet, while she's already an elected official in town, she faced daily sexist and biphobic attacks. “My opponents’ campaigns have engaged in and allowed this behavior on their social media accounts," she wrote on Facebook last month. “Hopefully by shining a light on this behavior, we can raise awareness and change this for other candidates and make it easier for women, mothers, and LGBTQ candidates to run for office in the future.” (Holstege welcomed her first child last month.)

Early results from this month's race show her leading with roughly 60% of the vote. Outside of her elected role, for which she'll serve a four-year term, Holstege also works on the city's Human Rights Commission, Homelessness Task Force, and the regional Planned Parenthood board.

More like this
What Working At Marvel Is Really Like, According To A 'Ms. Marvel' Co-Creator
By Gretchen Smail
Jurnee Smollett’s Heart Is Healing
By Rebecca Carroll
Lilibet & Prince Charles’ First Meeting Was Emotional, According To Reports
By El Hunt
For These Abortion Clinic Volunteers, Going TikTok Viral Is A Risk Worth Taking
By Audra Heinrichs
Get Even More From Bustle — Sign Up For The Newsletter