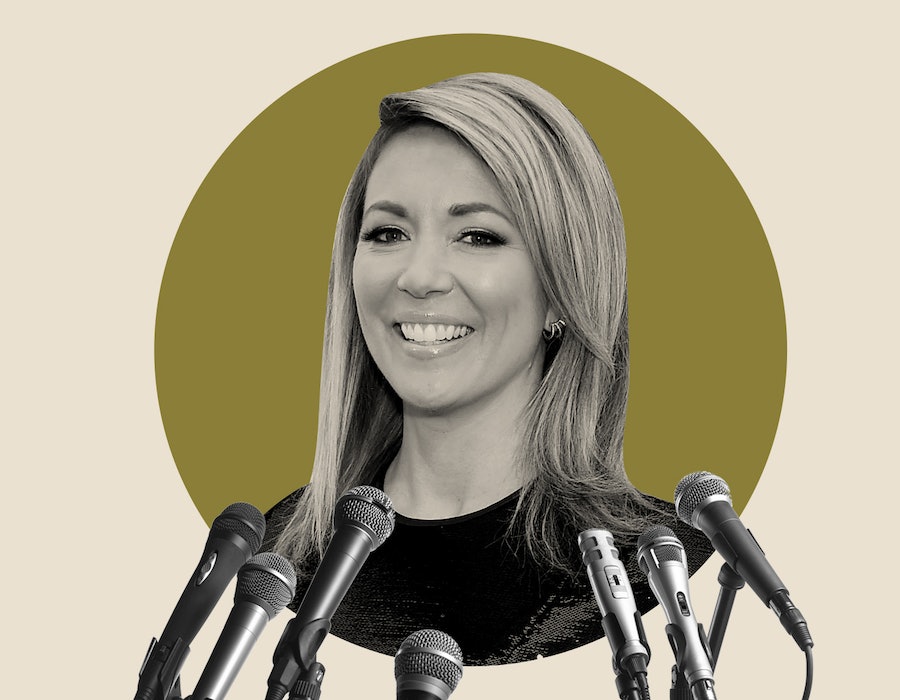 In Bustle's Quick Question, we ask leaders all about advice. This week, CNN’s Brooke Baldwin shares lessons from her 13-year run at the network.

On the morning of Jan. 20, 2017, Brooke Baldwin was balancing on the flatbed of a moving pickup truck, reporting live from President Trump’s Inauguration Day motorcade in Washington, D.C. Surrounded by tourists wearing red MAGA caps, Baldwin thought, “My God, this guy bragged on tape about where he likes to grab women.” Less than 24 hours later, she was reporting from the middle of the Women’s March, on the same streets, alongside nearly half a million people. The protest confirmed a “spidey-sense” she’d developed while covering the 2016 election: Women were organizing, whether in Facebook groups, boardrooms, or yes, campaign field offices. They were foregoing competition in favor of collaboration, and seeing results.

Baldwin calls this phenomenon the “huddle,” a feminization of a word that conjures images of men on a football field. “In naming it, I wanted to give this practice more power and legitimacy,” says Baldwin, whose first book, Huddle: How Women Unlock Their Collective Power, unpacks the concept.

This month marks Baldwin’s last with CNN, where she started as a freelancer in 2008. She describes the network as a workplace sometimes driven by male ego, in which men hold executive roles and earn more. Her colleague Dana Bash once gifted her a white pillow with pom-pom edges and “BSD” in gold sequins, referring to the Wall Street nickname from Michael Lewis in Liar’s Poker. (“Everyone wanted to be a Big Swinging Dick, even the women,” he wrote in 1989.) Her industry had a similar energy, says Baldwin of her early CNN years.

She’s not sure what the next chapter holds, but she believes “in her bones” it will focus on telling women’s stories. To celebrate the book, she talks to Bustle about CNN camaraderie, Stacey Abrams, and the art of the cold email.

There are so many types of huddles in the book, from Reese Witherspoon and Karlie Kloss creating networking opportunities to the “Black Girl Magic” judges in Harris County, Texas. What makes an effective huddle?

The women I interviewed believe in abundance mentality, or sharing their success. Sometimes that means sharing literal wealth, in the case of Stacey Abrams fundraising and getting women to help her flip Georgia. It’s also a willingness to amplify other women, and — to borrow from Megan Rapinoe’s great phrase — a desire to “throw down your ladder” if you have success or a platform.

When I picture huddling, I picture corporate women ducking into each others’ offices to strategize, or a student asking her female professor for advice during office hours. How did huddling and abundance mentality help you at CNN?

At the end of the day, if we hear about opportunities, we pass them along our huddle pipeline. I’ve also shared my salary, which I spoke about publicly on my show.

There’s a story I tell in the book. There was this “Make You Matter” week at CNN, which we do every year. One year, they put me front and center, and set up an interview with my colleague Alisyn Camerota. [On that] day, a hurricane was brewing on the East Coast. I was getting bumped off my show that afternoon in place of three prime-time anchors — who all happened to be male — and I was irked, but I had to participate in this “Make You Matter” breakfast Q&A session. I go and huddle with Alisyn in her office, and she’s like, “Get out of here, walk into our boss’s office, and tell him, ‘Put me in, coach.’”

I marched the 15 paces across the newsroom to my boss’s office and asked, “Why’d you send the boys?” He said, “The boys were being a pain in my ass.” I said, “I can be a pain in your ass.” He sort of laughed, [but] three weeks later he shows up at my office and asked, “Are your bags packed? You’re going to Florida tonight. You’re covering this hurricane.” That never would have happened had I not had my huddle.

How has the news industry changed during your tenure at CNN?

The other day, I was watching the first news conference with President Biden. There are so many women chief White House correspondents now, in a way that did not exist when I started at CNN in 2008.

In the book, you discuss sponsorship and mentorship. How does one go about finding and building those relationships? [Editor’s note: Mentors offer advice, and sponsors help you get ahead in specific, tangible ways.]

Stacey Abrams told me this story about how when she was 29, she was the deputy city attorney in Atlanta. This is a sponsorship example. It was the first time she had real access to power, and she was working with women secretaries who were extraordinarily well-versed in the legislative history of Georgia. Because they weren’t lawyers or paralegals, their salaries were capped. What did she do? She went to the city and was like, “You’re underpaying these women. Let’s get them training so we can up their salaries and give them better titles.”

Oh my gosh, I’m all about a cold email. When I was in college, I knew local news anchors like they were baseball cards. I knew their bios, where they went to college, and I figured out how to reach out to them to get advice.

Since 2016, there’s been a lot of marketing jargon around feminism and “female empowerment.” What separates the huddle from other concepts?

Huddling has been happening for decades below the surface. It’s women committing to each other and having each other’s backs. I want to acknowledge it, validate it, and give it power. The way our culture sometimes approaches female empowerment is to commodify it, to make it cutesy and pink and #GoGirl. I am not trying to play that game. Nor am I trying to “kick men out of the table.” All of these women I interviewed say, “We just want to build a new, bigger table.”

More like this
Savannah Guthrie Got Her First-Ever Tattoo With This Former Wild Child
By Suzanne Zuckerman
Pamela Anderson Is Still A Hopeless Romantic
By Ilana Kaplan
Delia Cai’s Small-Town Romance Goes Beyond The Tropes
By Samantha Leach
Jessica Simpson On The Time She Was Pursued By A Backstreet Boy & An *NSYNC Member
By The Editors
Get Even More From Bustle — Sign Up For The Newsletter
From hair trends to relationship advice, our daily newsletter has everything you need to sound like a person who’s on TikTok, even if you aren’t.