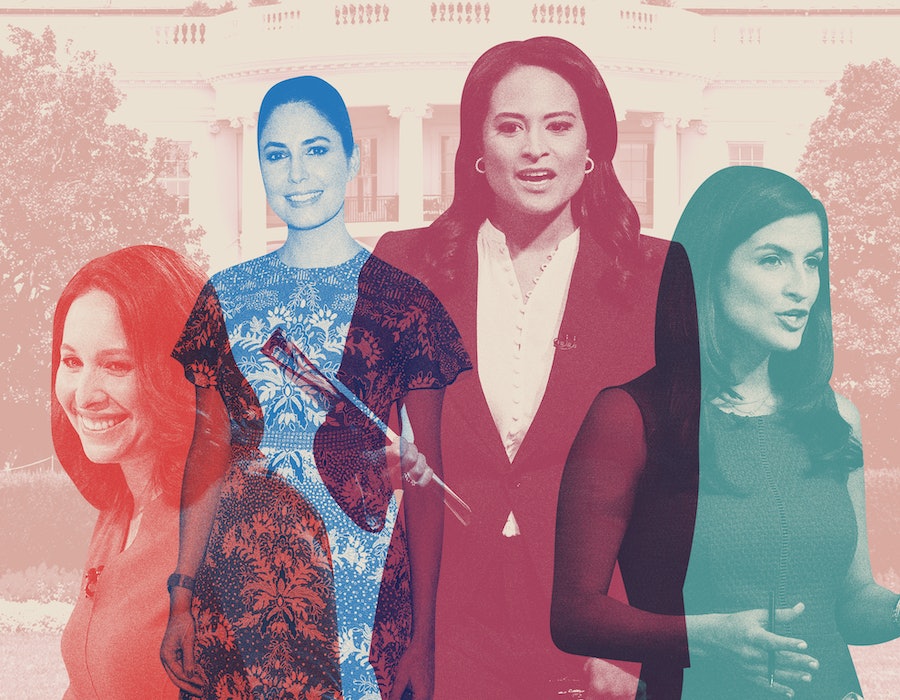 “I’m notorious for being a mosquito magnet,” says Cecilia Vega. During Capitol Hill’s summer months, when the insects make their seasonal return, the reporter douses herself in bug spray. When the ABC cameras start rolling and millions of viewers tune in for her White House updates, they’re spared the overwhelming stench of DEET. Mosquito fogs aren’t as common in Vega’s hometown, San Francisco. But she’s used to professional surprises.

For the last four years, Vega, 44, was ABC’s senior White House reporter. She covered the Trump administration, its infrequent press briefings, and rotating cast of press secretaries. Like some of her fellow journalists, she was verbally mocked by the former president. “I was trying to ask him a question and he said something like, ‘You don’t think. You’re not thinking. You never do,’” she says of the 2018 moment. “It was just nasty. … You never want to get into it with the president of the United States.”

Historically, the White House press corps has been disproportionately male. According to the Women’s Media Center, in 2019, only 37% of prime-time news broadcasts featured women anchors or correspondents. But times are changing.

On Jan. 19, Vega was promoted to ABC’s chief White House correspondent, becoming the first Latina in the role for an English-speaking network. She joins three other newly appointed chiefs, CNN’s Kaitlan Collins, CBS’ Nancy Cordes, who comes fresh off the Congressional beat, and NBC’s Kristen Welker, who shares the title with Peter Alexander. (They work alongside non-network counterparts Yamiche Alcindor and Ashley Parker, from PBS and the Washington Post, respectively.)

Both Vega and Kristen Welker, 44, knew from childhood they wanted to be reporters. Welker, who moderated the final 2020 presidential debate, used to write a handwritten newspaper about her stuffed animals in Philadelphia. Not so for Cordes. “My parents used to turn on the news, and I remember being so annoyed, [like] ‘Why do we have to watch this? It's so boring,’” remembers the Hawaii-raised correspondent, 46. Her mind changed during senior year at the University of Pennsylvania, as did Collins’. The 28-year-old started at the University of Alabama as a chemistry major before pivoting toward political science and journalism.

Collectively, the foursome have covered American politics for more than 60 years. To celebrate the moment, Bustle will touch base with each woman throughout 2021. But first, they spill the beans on Twitter alerts, rope lines, and off-camera dancing.

What’s been the biggest change since being named chief?

Nancy Cordes: This is all new for me. The [Biden administration] never goes on recess [like Congress does]. They never take a break. It’s 24 hours a day.

Cecilia Vega: The days are different now than they were in the Trump administration. The lack of [tweets] coming from the Oval Office has made a big quality-of-life difference. I still carry two cellphones and have an Apple watch, but my Twitter alerts are not going off as much.

What does an average day look like for you?

Kristen Welker: There’s no “average day” in Washington. This is a 24/7 news cycle, so I’m in constant contact with my sources and producers from the moment my eyes open. Then I’m racing to the White House or to Capitol Hill to file my live shot.

Kaitlan Collins: My day [also] starts with source calls, [but] I get up around 6 a.m. to work out. That’s a new thing I adopted in the later years of Trump because I needed 30 minutes of the day to not be on Twitter.

What does this new role mean to you?

Cordes: I went into the Oval Office last week and shouted questions to the president of the United States. This is an unbelievable opportunity.

Welker: When I’m in that briefing room, it’s not just about the policies. The policies are an extension of the way in which they impact people inside their own homes. It’s about getting information to the American public.

The four of you have worked together before. How does it feel to take this mantle together?

Welker: We’re fierce competitors, of course, but also great friends. I mean, I covered the 2012 [presidential] campaigns with Nancy. Nancy, Cecilia, and I covered the Clinton campaign [at our respective networks] in 2016 — who was going to get to the rope line first to interview Secretary Clinton? We’d be on the plane, filing our stories, laughing, sharing stories of our families. We push each other to be the best journalists we can be.

What have been some of the most surprising interviews you’ve done?

Collins: I never interviewed Trump directly one-on-one. Typically as a White House reporter, that’s something you would do. But [his] White House was so cagey and selective. The funniest thing did happen, though. During Biden’s first full week in office, I was upstairs at the White House, and President Biden was right there. We had never met one-on-one. I called him over and said, “I just want to introduce myself. I’m Kaitlan. I’m going to be covering you for CNN for the next four years.” We exchanged pleasantries. There was no staff around. It caught the White House off-guard. They weren’t planning on having [him] run into a reporter in the hallway.

Who’ve been some of your favorite people to interview?

Cordes: Most lawmakers are Type A, and they’re quite gregarious. That makes them fun to interview because they always have something interesting to say and they’re quite forthright about saying it. I loved interviewing John McCain. He had a great combination of knowledge and a sense of humor.

Did you have a career mentor, formally or informally?

Vega: I kneel at the altar of Diane Sawyer. She’s held my hand from the very first day that I started at this network. I’ll say the same thing for Martha Raddatz. We text all day, we talk all day.

Cordes: When I came to CBS, Katie Couric was the anchor of the CBS Evening News. She was a wonderful mentor and boss. And I’m not the only person who will mention Andrea Mitchell.

Welker: Andrea Mitchell, at the top of that list. When I arrived in Washington, D.C., I was on the phone with her early and often. She helped me navigate sources and strengthen my reporting. She’s my D.C. mom.

On a very pragmatic level, you’re outside doing live shots throughout the day. How do you prepare for D.C. weather?

Cordes: I’ve lived on the East Coast half my life, and still have never gotten used to cold. When I'm getting ready in the morning, I think, What’s my inside outfit going to be for the White House briefing or an interview? And what’s my outside outfit? [During the winter,] I’m thinking I shouldn’t have left Hawaii.

Vega: I’m having trouble sitting in this chair right now because I’m wearing so many layers. [Laughs.] I looked like a Russian nesting doll when I came in this morning.

Welker: Oh my gosh. This is maybe the most important message I can pass along to a young journalist: Come to work every day prepared to stand outside for nine hours because you never know when there’s going to be breaking news. And don’t be afraid to dance. When the camera’s not on you, jump up and down, do whatever you need to do to keep yourself warm.

A follow-up there, Kaitlan. Any turtleneck recommendations for fellow aficionados?

Collins: Most of them are 525 America. I just moved apartments, and when my sister and I were organizing my closet, she was so disturbed by how many I own. I mean, you can’t wear the same thing on TV every day. Looking at them now, it’s, like, dozens. It’s a little disturbing.

More like this
The Indigo Girls Taught Me Queer Relationships Could Be Messy, Too
By Hannah Soyer
MOBO Awards Found Kanya King On The Woman Whose Grit & Determination Spur Her On
By Kanya King
Prince William Condemns “Unacceptable” Comments Made To A Black Guest At Buckingham Palace
By Shahed Ezaydi
The David Beckham Qatar Controversy, Explained
By Sophie McEvoy
Get Even More From Bustle — Sign Up For The Newsletter