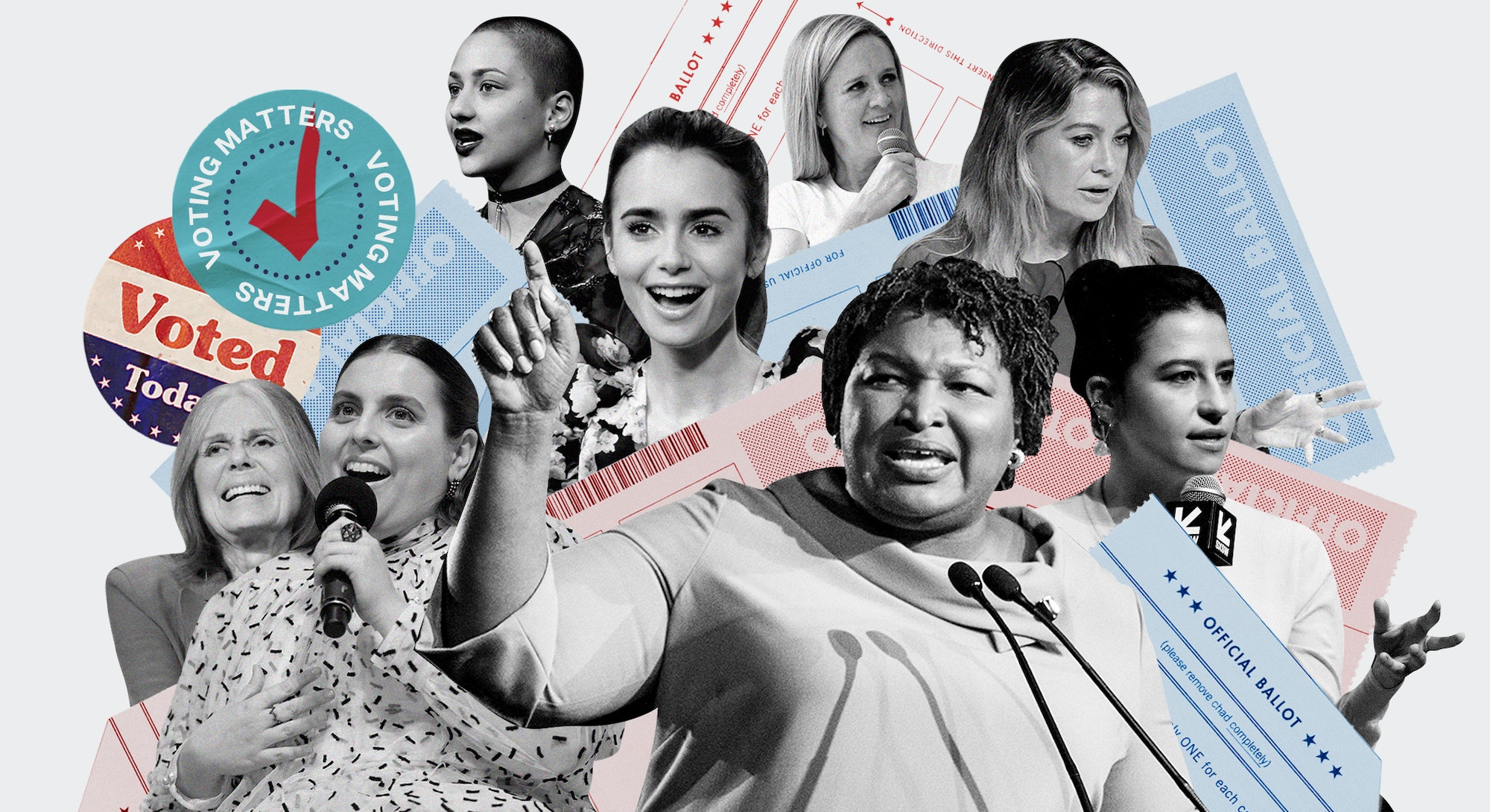 “Nothing is more important.” Gloria Steinem is right about many things, chief among them the life-affirming gravity of voting. To mark National Voter Registration Day, we spoke to some of our favorite trailblazers about their own experiences in the voting booth, from their first time using their voice through to watching the results come in on election night. It’s our hope that their stories of hope and heartbreak will leave you in no doubt about one thing: Voting — and your vote, specifically — matters. —Charlotte Owen, Editorial Director

Right after I graduated from college, I had a fellowship in India not so long after their independence. My first memory of [understanding] the importance of voting is tied to then. I saw people lining up to vote, not just for hours but for days. It had always been part of my life, because my mother had made it clear that it was important, but I became more aware of it living there, realizing how many people had fought and died in order to vote.

The voting booth is one of the few places on Earth where we're all equal. If we don't vote, we don't exist. In a very real sense of the structure of our lives, we have opted out. In this country, the ability to vote is one of the rare forms of democracy that begins to compensate for the economic and racial divisions. Nothing is more important.

During the last election, we assumed that Hillary Clinton was going to win, and indeed would have won, had it not been for the Electoral College. That night I was watching the election returns with a group of women who were the ambassadors to the United Nations from 20 or 25 different countries. We were in the apartment at Waldorf Towers of the U.S. ambassador to the U.N., Samantha Power. It was a very, very dramatic night, especially because I could see not only what the loss of Hillary Clinton and the victory of Trump meant in this country, but what it meant in the countries of all of those women. They were in despair. They could see that isolationism and profiteering was going to replace the more global, connected, democratic vision that Hillary Clinton had. I had planned to go from there to the [Javits Center] arena, where Hillary Clinton's campaign was, but of course, then I didn't. We all just went home in shock and sorrow.

I turned 18 on Dec. 9, 1991. My first major election was November of 1992. It was in the wake of the Rodney King protests across the country. I was a student activist and had been instrumental in organizing protests in Georgia in response to police brutality and youth poverty. I was also involved in the Clinton campaign as a volunteer, getting young people to turn out in that election, particularly young Black people at the Atlanta University Center (AUC). I had been raised to believe that the act of voting was this sacred duty, and my job was getting my peers to see it as vital.

But it was hard in the wake of the Rodney King protests. We were in the midst of an economic downturn, and there was a lot of worry about what the future would hold. I remember being a young woman in jeans and a T-shirt, trying to convince my fellow students that their voices mattered.

On Election Day, I remember going to the polling place — I think it was the library — and standing in line. It was within walking distance. I did not have a driver's license, but at that time you could use your student ID in Georgia. So I pulled out my Spelman College student ID and cast my ballot for Bill Clinton.

My parents told me to go to the end of the ballot, because that's where the fine print is. I'm deeply nerdy. I used to go to city council meetings and zoning commission meetings. I was an unusually informed teenage voter. So it was amazing. I remember it was a humbling experience, especially when I’d been waiting for so long [to turn 18]. It was powerful, being able to pick who would speak for me.

I remember when Obama was first elected in 2008. I was in a tech rehearsal for Bye, Bye Birdie at my local community theater, and there was a tiny TV shoved into the corner of the green room. We all gathered around and watched the results come in. It felt like a wave of hope washing over all of us as we stood there in our stage makeup and wigs.

My first experience voting was then for President Obama and Vice President Biden in the 2012 election. I was registered in Connecticut, because I was a sophomore at Wesleyan University at the time. I remember walking down into town to the polling place with my best friend, Sarah. It was exhilarating and meaningful and profound. We were walking on air when we left!

It was 2008. I was 19, so it was the first presidential year I was eligible to vote. I was working for Nickelodeon at the time, part of their show called Kids Pick the President. We spoke to people about the vote and how kids could [get] involved. I had done a lot of research, asked a lot of questions. When it came time for Election Day, it was such a big day for me. I can remember everything about it. My mom and I went together. I was wearing a light pair of jeans and a gray long-sleeve sweater.

I have a photo of myself actually placing the ballot in the box. When we left, having the sticker and being like, "Oh my God, I just did it," felt so empowering. I kept my “I Voted” sticker on all day and then stuck it on a piece of paper with the words, "First time voting, 19 years old" on the back. I remember feeling like I had truly been part of history.

That night, I was driving with my mom in the car. I have an image of driving down Sunset Boulevard, staring at Tower Records, which is very LA. At a stoplight, the results were coming in, and we were turning up the volume. I remember Obama being in the lead. It was so joyous. I remember hearing and seeing people honking and celebrating in the streets. History was being made, and we had to make as much noise as possible.

My first experience voting was for Hillary in 2016. I was granted full citizenship in late 2014, but had lived in the U.S. and worked through every election cycle since 2003. Let me tell you, I was ecstatic. I dressed up. I wore lipstick. I brought my daughter with me so she could witness this historic moment. I misted over, cast my vote, slapped that sticker on my jacket lapel, and innocently skip-hopped to work afterward, completely confident that I had made a statement of intent. Civic duty performed. Ready for the first female president.

This time I will use my vote to make a concrete statement that I reject this administration and everything they stand for. I get that I have a TV show and I certainly use my platform to shout from the rooftops, but my vote is the actual action that I take to push the ideology of Trumpism into the sea. I’ll take my child with me to vote again this time as they need to know that democracy is something you have to keep fighting for, and it culminates in the one day every few years that you get to stand in line with other people and make a stand about something. It is not glamorous, but it is necessary. It's part of the routine. It's not negotiable. It is required of you.

I've only been through one election night in which I was watching the results for an election that I participated in, since I was 18 when I first voted. My peers organized a night at the local sports restaurant, and we asked the staff to turn the channels to the election results. It was a rowdy, loud night, the restaurant was absolutely filled with people who knew each other closely through activist work, and the food was coming out every now and again to be absolutely demolished by hungry teenagers. I think I was too nervous to eat. I spent most of the night burning off my anxiety by playing the claw machine in the kiddy arcade corner; I won seven stuffed animals and gave them to the various people who had loaned me a buck to play.

Many of my peers were incredibly upset about the results, when they started to slowly come in, and a few people were crying. Hope and pride are never going to be in your hearts when a legitimate racist who took money from Islamophobic/white-supremacist hate speech groups gets elected (Lookin' at you, Ronaldo). The vibes in the room were similar to how it felt when Trump won. Florida might not have been a win, but many other states were reporting incredible results, and we cheered when we found out that various horrible politicians had lost to wonderful people who would actually represent their constituents, not their donors. The country had also seen the highest midterm voter turnout since 1914, almost 100 years! It was a night of really mixed feelings.

My first experience voting was for Barack Obama in 2008. I was 21 years old, and it was my first time voting. I hadn't voted in primaries or mid-terms before — didn't yet understand how important they were and how my vote contributed to actual change — but I had started learning about the government with the Bush years and the war. And when I voted for Barack Obama, I felt like I was voting for new leadership. If I had a child, I would definitely take them to come see me vote. It always felt inspiring and connective to see my parents vote, and I felt included and considered.

Watching the election results come in is going to be intense. I have hope that in November, we are going to see how powerful Gen Z and millennials are, and how we are now the leaders in thought and culture in the United States of America, and how that is starting to translate into policy. Our generation is the first to have the [most] enormous multiracial uprising for racial equality and climate justice the world has ever seen. In fact, the world saw it! And responded! And participated! We are the first generation to embrace our global community, and I know we are going to vote in Biden and Harris by a landslide and claim our stake in this planet.

I’ve always voted, but I don’t really remember my first time. At this particular moment in time, I think of my children and the health of our planet when I go to vote, and I’ll take my kids along with me as it's important that children see that we have to participate in life — it's important to protest, it's important to vote, it's important to show up and use your voice. Otherwise, watching the results come in on election night will be… terrifying.