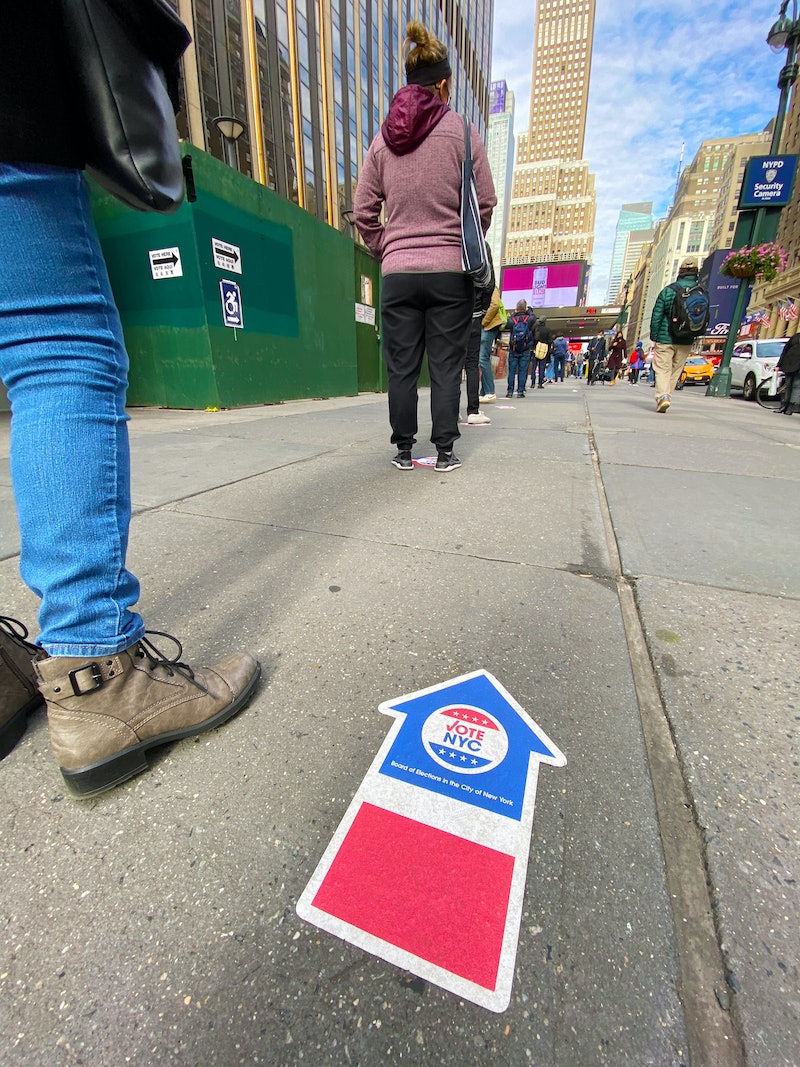 It's a shock on everyone's system, for sure, but Election Day is upon us. If you haven't gotten the chance to send in your ballot or drop it off early — and you've got your mask ready to go — you might be wondering how long it will take to vote in the 2020 election.

How Is Voting On Election Day Different In 2020?

Traditional polling places like public schools are closed to voters during the COVID-19 pandemic, which are making for longer-than-normal lines during early voting. ABC News reported on Oct. 30 that with early voting available in all 50 states (and D.C.) this year, over 81 million ballots have already been cast (nearly 30 million of which were IRL), with many states easily breaking early voting records.

Even with so many people voting early, Election Day wait times won't necessarily be super short, according to MIT's Election and Science Lab's tool the Election Performance Index (EPI), which tracks each state's voting conditions. Combine the expected massive voter turnout with a smaller number of open polling places with the social distancing measures required to keep people safe while waiting in line, and the EPI says that there may well still be long wait times on Election Day. At the same time, The New York Times suggested that thanks to incredible early voting turnout, the Election Day lines might be shorter than you'd think.

What Will Voting Wait Times Be Like In My State?

Your state and town might have long lines on Election Day — or, they might be pretty average. It generally depends on where you live. According to a Bipartisan Policy Center report on polling lines in 2018, precincts with around 90% white voters experienced an average wait time of 5.1 minutes, whereas precincts with around 90% BIPOC voters experienced average wait times of around 32.4 minutes. This is proving to be an especially tough year to predict, so to be on the safe side, set aside more time than you think you should need. It really is down to your individual polling place, so it might be worth seeing if your neighbors are tagging your location on Instagram with waiting time estimates, or otherwise sharing info in your group text. (And if you're not sure where your polling place is, or need other info about how to vote today, check out Vote.org's guide.)

Election Day isn't a federal holiday, and there is no national law that requires your boss to give you time to go vote. But, according to Business Insider, a majority of states have voter-leave laws, where you can vote as paid or unpaid time off. That said, if you can get some time in the middle of the day to vote, you might want to use it — according to that 2018 Bipartisan Policy Center report, the majority of polling places had their longest wait times early in the morning around opening time.

Of course, people can't know how working from home will change that trend now that it's 2020, but one thing is for sure — if you can vote at some point in the day, you definitely should.