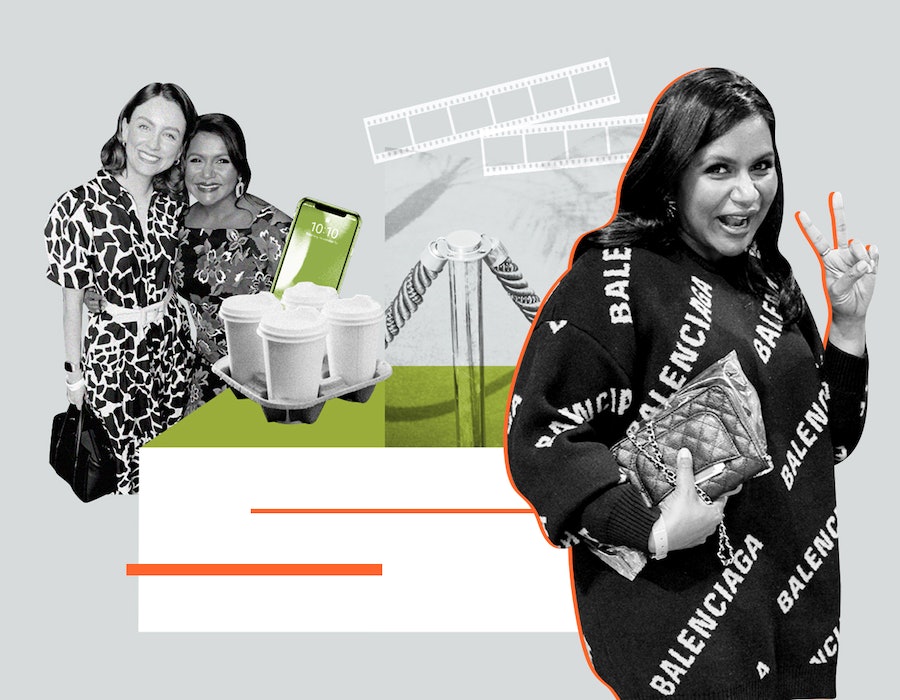 In "Deskside Confessionals," Bustle speaks with assistants to the stars, CEOs, and cultural tastemakers. What does a real-life Andy Sachs do to decompress, juggle projects, and bond with the boss? First up, Mindy Kaling's can-do sidekick, Elena Dole.

Elena Dole started her new job on April Fools' Day 2019, an apropos beginning for Mindy Kaling’s new assistant. The Hollywood multihyphenate — actor, writer, creator, producer, you name it — was launching production on a new Netflix series, Never Have I Ever (April 27). On Day 1, Dole nestled into a crowded writer’s room at NBCUniversal.

Dole, 24, serves as Kaling’s primary work assistant and is around for anything she needs, from readying a microphone to offering thoughts on an unpublished screenplay. The Los Angeles native first met the comedian when a friend from her alma mater, the University of Southern California, texted: “Do you know someone who could help my boss with some part-time work?” she remembers. “I was like, ‘I’d be interested.’ ” Dole dishes on her famous boss’s pet peeves, her glamorous new office, and their shared penchant for yams.

Can you tell me about the interview process?

I went in for an interview with Mindy and her [previous] assistant, Akshara. We chatted for 20 to 30 minutes. She mainly just wanted to get to know me as a person, because it’s such a personal job. Experience was second. That was for part-time [employment], and then the need was over. A week later, a writer’s assistant job opened up at one of her TV shows, Four Weddings and a Funeral. I interviewed for and got that. Around the time that show was wrapping up, it looked like her assistant was going to be promoted. I stuck around, sent some e-mails, [and] switched into that role.

Did you have to interview again?

I did. I heard from Akshara about the quantity of work and range of tasks, to make sure I understood [the] commitment. You’re dedicating a couple years to learn and support Mindy. She’s wonderful. Why would you not?

Any takeaways from the interview?

Well, she’s a stickler for good handwriting. I have medium handwriting. She described it as being “age appropriate.” Her previous assistant had beautiful handwriting, so I had big shoes to fill. It's really funny. She was like, “Elena! Your handwriting! That’s enough for today.”

What are your main responsibilities?

My role is like the switchboard for every avenue of her life. One day, I’ll be talking with a line producer of the show, while also texting her publicist, e-mailing her social media team, and booking flights for a trip, all while reading a script.

Do you have a moment from this job you’re most proud of?

Two other assistants and I put together a wrap party for the whole cast and crew of her Netflix show. We had 315 guests. We worked so hard, and it went off without a hitch.

My office is technically wherever she is. If she has a show in production, we work out of NBCUniversal. When she travels, or if she has a commercial shoot, I'll go with her. We also have an office at Warner Brothers. When she's between shows, we'll work from home.

Tell me about the Warner Brothers office.

We had it designed by Serena & Lily, one of Mindy’s favorite design companies. We have a neon sign, very plush carpets. There are couches and fun pillows, and posters from all of her shows. We have a bike. You walk in like, “Can I move in?”

What's the biggest perk of your job?

Getting to be around Mindy. She trusts the people around her. If she’s read a script and thinks, “Hmm, I just don’t know,” she'll give it to me. She always asks our opinions. Last week, we were kind of quarantined [but] hadn't done the whole lockdown yet. She made a full brisket from scratch for us.

What? That sounds amazing.

We’re really into food. Mindy insists on the writers having a stocked kitchen, treats, and food trucks. Swedish Fish are popular. We both really like yams.

I know, it’s a very random answer. Just a full yam, and we put toppings on it, like a baked potato. Also, pita chips and hummus. There’s a hummus [stand] at the farmers market, which Mindy sometimes [visits]. She makes delicious banana bread as well.

Minus the coronavirus, it would be in-person communication. Second would be a tie between text and e-mail. I only call her if something’s urgent.

Does she ever bring her daughter to the office?

She loves to include her daughter when she can, whether that’s a visit or FaceTime. You can hear them giggling down the hallway. Right now we’re working mostly from her house, so she’s able to play with her outside. I gave them a parachute, and she really likes it. She likes to play hide-and-seek even though she’s only 2. She's the smartest baby I've ever met.

What’s something that’s surprised you to learn about Mindy?

She truly works every single day. I don’t know if people realize she’s not just like [The Mindy Project’s] Mindy Lahiri or [The Office’s] Kelly Kapoor.

Have you learned anything from her about how to handle tough situations?

Stick to what you're saying. If you’re delivering tough news, there’s no reason to back off. Women in all [industries] sometimes aren’t taken seriously. People take Mindy seriously. It’s impressive.

How does she make people take her seriously?

She has a strong vision for her projects. She sticks to that, because she knows it’ll be good, and knows what she needs to make that happen.

What career goals do you have?

I don’t want to be a writer. The network route interests me, being able to work like a consultant on different shows and making budget decisions. We’ll see what life has in store for me.

I make a lot of dad jokes, which she thinks are ridiculous. They’re not cool, and she'll be like, “Elena, stop it. Those are so bad, stop it.” She always smiles, so I keep doing them.

More like this
For These Abortion Clinic Volunteers, Going TikTok Viral Is A Risk Worth Taking
By Audra Heinrichs
'Stranger Things' Cast Thinks It's "OK Not To Label" Will Byers' Sexuality
By Alyssa Lapid
Everything You Need To Know About The 'Knives Out' Sequel
By Grace Wehniainen
S Club 7’s Jon Lee Continues To Reach For The Stars
By Rachel Mantock
Get Even More From Bustle — Sign Up For The Newsletter