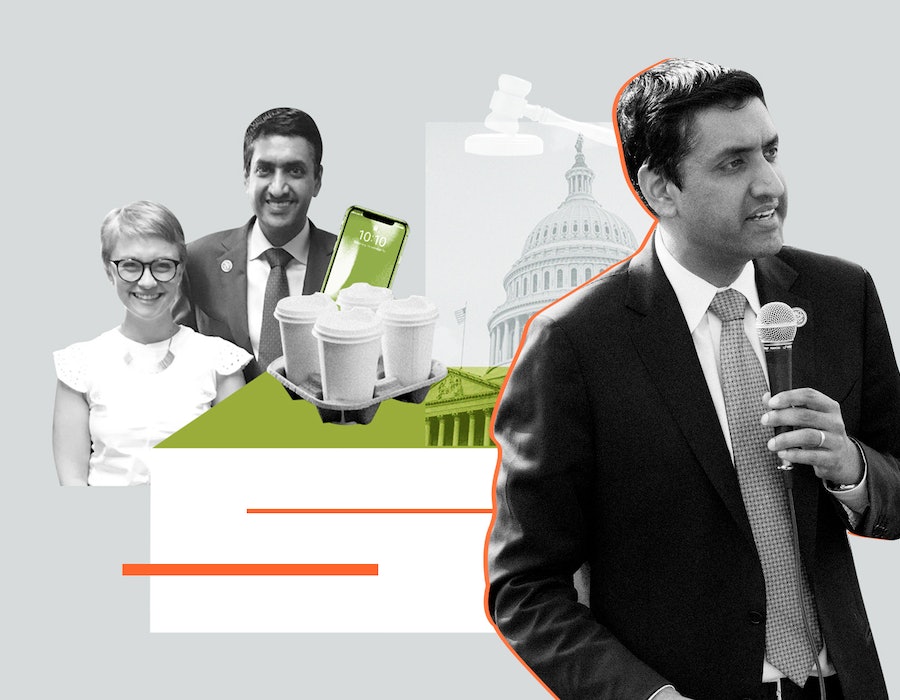 In "Deskside Confessionals," Bustle speaks with assistants to the stars, CEOs, and cultural tastemakers. What does a real-life Andy Sachs do to decompress, juggle projects, and bond with the boss? This week, cozy up to Emma Preston, the executive assistant to California Congressman Ro Khanna.

When Emma Preston was 6 years old, she wanted to be president of the United States. These days, the 23-year-old lives and works within spitting distance of the White House, about 1,000 miles away from her hometown of Council Bluffs, Iowa.

For more than a year, Preston has worked as the executive assistant to Congressman Ro Khanna, who serves California’s left-leaning 17th District. The University of Chicago alum manages Khanna’s schedule, which includes organizing his calendar, ushering him to voting sessions, and putting out proverbial fires ⁠— now from the social-distancing safety of her apartment. “But it’s a luxury to quarantine,” adds Preston, who grew up working at her family’s three-generation restaurant, an Iowa diner-and-ice cream spot. “My whole family’s in the service industry. My parents are going to work every day, wearing masks, making sure people in the community are getting fed.”

She talks to Bustle about the steep learning curve, her 11-hour days, and the impracticality of heels.

How did you end working for Congressman Khanna, rather than for an Iowa representative?

I applied specifically to work for him. I love what he does on foreign policy. It speaks to my vision of a peaceful world, and he does a lot of anti-war work.

You interned for him after your junior year of college. What did the job application look like post-grad?

At the time, I was living in Chicago, working with survivors of domestic violence. I was reluctant to leave. But I had a conversation with my boss [from] when I was an intern. She said, “If you can be a scheduler on the Hill, you can do almost any job.” She knew exactly what to say. It appealed to my sense of competition. Then I interviewed with our chief of staff, with Ro, and ultimately landed the job.

Do you remember any questions he asked?

Honestly, it was a pretty typical interview. It was a phone call. I think it was probably 7:30 p.m. Eastern time. I was thinking, “Wow, he's still in the office at 7:30. That's going to be indicative of my job.”

Does everyone stay at the office until he leaves?

I got in a little trouble for staying too late, so now I leave at 7. [Laughs]

Can you talk me through an average day, pre-coronavirus?

I usually get into the office about 8 a.m. The first thing: I make sure my desk is tidy, and then I make coffee for the office. I sit down in front of my two monitors and get to work answering emails and phone calls.

And you often walk him to meetings and votes. Did you have to change your work ensemble, given the amount of walking you do?

I used to wear heels pretty frequently. Now I do not. [But] every office is different. Ours is more relaxed. In fact, if I come in wearing heels, one of my coworkers is going to be like, “Oh, you're dressing up.”

What job prepared you the most for this one?

Working in my family's diner, definitely. Balancing three ice cream cones in my hand, counting back change to a customer, remembering orders, and having a smile on your face.

What was the learning curve like for this job?

Very steep. In my first two weeks, he looped me in on an email and said, “Emma, can you please set up a time for me to talk with Francis?” I emailed this person, “Hi, Francis. Is there a good time next week when you could come to the Hill and meet with my boss?” Francis turned out to be Rep. Francis Rooney from Florida.

Is email the main way you two communicate?

Right now it's texting and phone calls. When we're on the Hill, it's mostly in-person.

Does he use emojis?

He's the fastest texter I've ever met in my life. He doesn’t have time for emojis.

Does he have any pet peeves?

[He asks] that we call him Ro. The first week on the job, we passed the War Powers Resolution for Yemen, which was really exciting. [President Trump later vetoed the bipartisan legislation.] Walking back to the office, I turned to him and was like, “Congratulations, Congressman Khanna.” He looked at me like a deer in the headlights. None of his staff call him Congressman Khanna. We call him Ro because that's his preference.

What misconceptions do people have about working on Capitol Hill?

The votes. The leadership office will send an email in the morning, like, “We predict votes will be called around 4 p.m.” But votes could be called at any moment. Literally, a bell will ring over the loudspeaker, and we have to drop what we're doing and get our bosses to the floor. The representatives flood to the Capitol. In the winter, we usually go for the tunnels. It gets really congested.

Does the congressman have any hidden talents?

He doesn’t need to sleep as much as other people. It's astounding. He takes red eyes back and forth from California. He'll have a full, 12-hour day working in the district, hop on a red eye, and then do it again the next day in D.C.

What’s been your proudest moment in this job?

I worked to introduce a bill to add a third gender option to U.S. passports. Sixteen states offer a third option on driver licenses, and we wanted to do something at the federal level. In February, we introduced this bill. I wrote up the legislation, printed it, and dropped it with the folks on the [House] floor. We have 29 co-sponsors. We're hoping to move it through committee when the pandemic subsides.

When you were 6, you wanted to be president. What’s your dream career trajectory now?

That's a good question. I've been saying that my dream job is to be a children's book illustrator. Maybe in the future I’ll be an elementary art teacher. For now, I'm 100% here with Ro.

More like this
Watch Jacinda Arden’s Devastatingly Honest Resignation Speech
By Sam Ramsden
At 28, Rosie Perez Risked Her Career To Stop Playing Stereotypes
By Gabrielle Bondi
24 History-Making Black Women You Probably Didn't Learn About In School
By Ayana Lage and JR Thorpe
25 Inspiring Quotes From Black Women To Celebrate Black History Month
By Kyli Rodriguez-Cayro and JR Thorpe
Get Even More From Bustle — Sign Up For The Newsletter
From hair trends to relationship advice, our daily newsletter has everything you need to sound like a person who’s on TikTok, even if you aren’t.