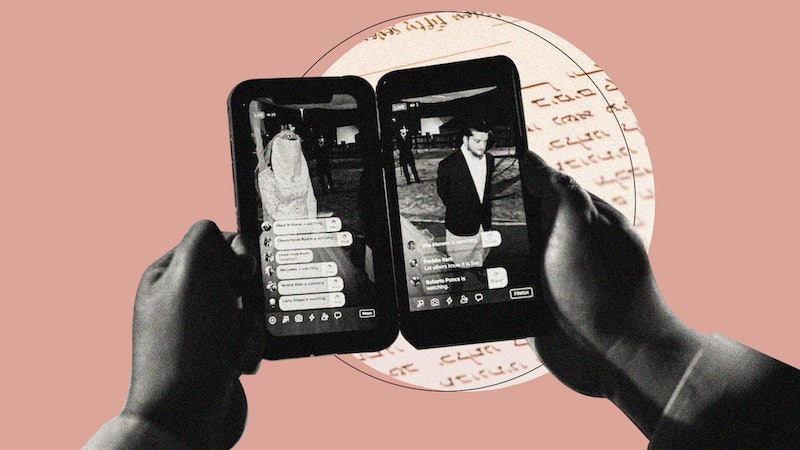 On a Wednesday morning in mid-March, Mimmy Schaeffer bumped into her friend Ilana Ybgi outside a nail salon in Crown Heights, Brooklyn. The pair, both members of the Chabad-Lubavitch movement of Hasidic Judaism, met as coworkers in the fall. Schaeffer, 22, was desperately looking for a place to get her nails done, as the city was quickly shutting down for COVID-19. The last time they’d spoken, Ybgi, 35, had been planning a late-March wedding in London. Schaeffer had been planning her own Crown Heights ceremony to be held around the same time. But due to a last-minute change of plans, Schaeffer’s nuptials were now the next day, March 19, hence the mani emergency. Unbeknownst to her, so were Ybgi’s.

“I would have loved to be there from a distance if it wasn’t [the date of] my own wedding,” Schaeffer told her.

The coronavirus has hit New York’s ultra-Orthodox communities particularly hard, in part due to the many tight-knit and intergenerational households. Despite taking preventative measures, Chabad.org cites roughly 40 COVID-19 related deaths in Crown Heights, where a majority of its 20,000 Jewish residents identify with Chabad-Lubavitch, according to spokesman Rabbi Motti Seligson. On March 17, the Chabad headquarters and flagship synagogue closed for the first time in history.

Many weddings, however, have continued — albeit with precautions in place. Schaeffer had dated her now-husband, Mendy, for less than two months before planning their 500-person wedding for late March in Crown Heights. When New York Governor Andrew Cuomo banned gatherings of more than 500 people on March 12, the couple decided to reschedule. (On May 22, the governor updated his guidelines to allow gatherings of up to 10 people, who must observe social distancing.) Mendy’s parents live in Canada, so when rumors started swirling about closing the Canadian border, they knew time was of the essence. They chose a new, earlier date, March 19; a different venue in Morristown, New Jersey; and planned the event in 48 hours.

The gathering was small — just their nuclear families, with whom they’d each been quarantining, a few cousins, and Schaeffer’s best friend, who doubled as her makeup artist. A few people were uneasy about the event, but everyone wore masks and gloves and sanitized their hands often. Rather than hiring a caterer, they opted for Chinese takeout served in individual containers. After the ceremony, there was contact-free dancing, where guests held napkins instead of hands. Speakers and a playlist replaced a live band, to limit their numbers. In Hasidic weddings, men and women remain separated for dancing, but because there were so few people, the couple chose to dance together with their families, which wouldn't have happened if all had gone according to the original plan. “It was just about us connecting with one another,” Schaeffer says. “I wouldn't have had it any other way.”

Neither, it seems, would many other couples. Yehudis Cohen works as an assistant principal at Machon L'Yahadus, a post-secondary school for Jewish women in Crown Heights. Five of her students have gotten married recently, and she estimates there have been at least 24 nuptials since mid-March. According to Rabbi Yonah Blum, associate director of the Institute of Jewish Spirituality and Society, celebrating a wedding would never override saving lives. “Since gathering at a wedding is dangerous now, postponing the wedding is mandated,” Blum says. “Unless, as many have recently figured out how to do, a creative alternative to the traditional crowd-gathering is used.”

Ybgi and her now-husband, Srulick, got engaged in late February. They were planning to get married in a London cricket field on March 30, in a quaint affair with 120 guests. But on March 11, President Donald Trump announced he'd begin banning travelers from Europe to the U.S. As a precaution, the couple cancelled their overseas event and set a new date, March 19, for a hometown ceremony. They had one week to plan a new wedding.

“Things started shutting down minute by minute, but we were holding on tightly to the fact that we wanted to have a wedding,” Ybgi says. She called a Crown Heights wedding planner, who booked a small venue for the first part of the ceremony and planned for an outdoor chuppah, the canopy under which Jewish weddings occur, to be arranged in front of the Chabad World Headquarters.

They thought it’d be too risky for their parents to attend, and as traditional Jewish nuptials require a quorum of ten Jewish men, they improvised. They gathered ten volunteers from the street, who agreed to stand six feet apart for the outdoor ceremony. For the second half of the event, the small wedding party — a couple friends, their rabbi, yeshiva students, and a photographer — walked the few blocks from the reception hall to the chuppah. “A few of the people stood half a block away, which was bittersweet,” she says. Passersby cheered, and the event was livestreamed to thousands of people via Instagram and Facebook. “I felt the world was in need of healing,” Ybgi says. “The joy of getting married was against the backdrop of a lot of fear. It allowed such a deep reflection.”

It’s now been over three months since the weddings, and neither woman regrets her decision. Fortunately, no one got sick. “I’ve had some of the most precious moments of my entire life in the last three months,” says Ybgi, who’s been explaining the Black Lives Matter protests to her three stepdaughters, ages 9, 6, and 4. “I wouldn’t have wanted to wait."

Schaeffer agrees. “Marriage is a journey,” she says. “I never want to feel too settled.”

More like this
A Therapist’s Guide To Staying Calm During Family Holidays
By Carolyn Steber
The Indigo Girls Taught Me Queer Relationships Could Be Messy, Too
By Hannah Soyer
MOBO Awards Found Kanya King On The Woman Whose Grit & Determination Spur Her On
By Kanya King
Hinge's New Feature Makes It Easier To Explore Non-Monogamy
By Lexi Inks
Get Even More From Bustle — Sign Up For The Newsletter