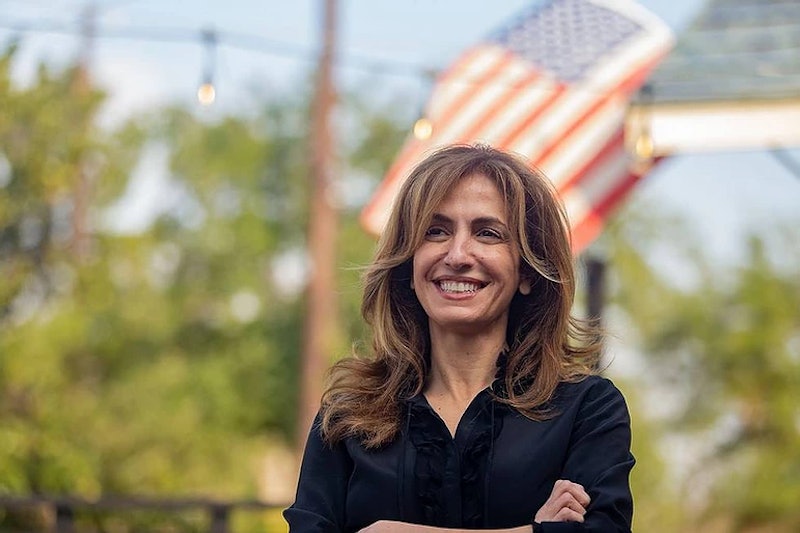 Sima Ladjevardian remembers life as a 12-year-old at the height of Iran's 1979 Islamic Revolution. “It started with us being in school and feeling like there was an earthquake going on,” she tells Bustle. “Everybody [was] running out, seeing a sea of people outside of the school. They were throwing acid in the school, I could hear gunshots.” Her family was forced to flee for their safety, alongside 3.1 million of their fellow Iranians, ultimately resettling in Northern California. “I took a lunchbox with family photos,” says Ladjevardian, a lawyer and former Democratic political strategist. “I had this weird feeling we were never going to go back.”

Ladjevardian is running to represent Texas’ 2nd Congressional District, which includes parts of Northern Houston, where she moved in the early ’90s. If she pulls off an upset against Republican incumbent Rep. Daniel Crenshaw — which FiveThirtyEight marks at 2% likelihood — she’d be the first Iranian American in Congress and the third Muslim woman. In Iran, her father and grandmother had been members of Parliament.

Iranian Americans, a traditionally left-leaning community, are split politically with regard to President Trump, often along generational lines. According to a September survey conducted by the Public Affairs Alliance of Iranian Americans, about 31% of Iranian Americans plan to vote for Trump, compared to roughly 56% for Joe Biden. “Older Iranians may be identified more with the Republican Party, because the revolution happened during Carter['s presidency],” says Ladjevardian, who’s a Democrat. “I think everybody assumed that the U.S. would intervene.”

President Carter is etched into the minds of many Iranians as the U.S. leader who, in their view, handed Iran over to extremism. During the Islamic Revolution, when the Shah and the country’s 2,500-year-old monarchy was overthrown, the Democratic president “paved the way” for the revolutionaries’ success, according to The Guardian. (It tracked with other U.S. interventionism, like in 1953, when the CIA orchestrated the overthrow of the country’s first democratically elected prime minister, or in January, when the Trump administration assassinated a top general, Qasem Soleimani.)

After the revolution, Tehran lost its secular traditions for religious extremism, quickly leading to widespread persecution of religious minorities, women, the LGBTQ+ community, and families — like Ladjevardian’s — with connection to the Shah’s regime.

Nazita Lajevardi, an assistant professor of political science at Michigan State University, says the revolution is often a determining factor for people’s votes. “Our parents’ generation and their parents’ generation experienced political trauma. There's never been a reconciliation, so those are open wounds,” she says. “They're traumatized and they want to exact revenge [on the current Iranian government].”

“There are some Iranians ... who are really stuck. Do I vote [for Trump and thus] against the Iranian regime, or do I vote for something that's better for domestic America?"

In Orange County, California, Sherveen*, a 25-year-old contractor born and raised in Orange County by immigrant parents, spoke of this generational breakdown. While Sherveen is extremely opposed to Donald Trump’s reelection, citing the president’s xenophobic, anti-refugee policies, such as the 2017 Muslim ban, he says his mother is a “huge supporter” of Trump. “She thinks he's tough on Iran, and a lot of my friends' parents think the same way too … The only thing that matters to [my parents’ generation] … is Iran,” Sherveen says.

He spoke of a recent trip to Iran, where he witnessed the impact of Trump’s sanctions. “It's getting more and more expensive, and people can't get their medications,” he says. “But [for] a lot of these [people] that support Trump … it's like necessary collateral damage to get rid of the country’s government.”

In Evanston, Illinois, Amanda D’Urso is a Ph.D. candidate at Northwestern University, where she studies the historical shifts of Middle Eastern and North African (MENA) people. “The Iranian regime has not been subtle in their disdain for Trump,” says D’Urso, who’s Iranian American. “There are some Iranians, who have lived here for most of their lives, who are really stuck. Do I vote [for Trump and thus] against the Iranian regime, or do I vote for something that's better for domestic America, where I live today?” she says. “I'm not sure that the second-generation Iranians feel as stuck between those two choices.”

Being single-issue voters, in this way, often separates the older generations from their children. “For those of us who are born and raised here, our investment in this country differs from that of our parents,” Lajevardi says. “We fall more alongside progressive lines, because we have full political identities here. We're not voting based on a single issue.”

In the Houston area, one of the country’s most ethnically diverse, Ladjevardian falls firmly into that camp. “This is where we live. This is the country that accepted us,” she says. Along with Dallas, the Houston metro area has one of the largest populations of Iranians. “It's important for immigrant communities to know that their voices and politics do matter. [And] if you want to have a say, you have to be at the table.”

*Sherveen's last name has been omitted, as he regularly travels to Iran.

More like this
What The Lionesses’ Win Really Means For The Future Of Football
By Angelina Kelly
Talking About Mental Health In Sport Is Crucial, Says England Legend Karen Carney
By Sam Ramsden
Meet The Young Leaders Fighting For Global Change
By Sam Ramsden
Jiu Jitsu Champ Kim Blake Is Pushing For More Women In The Sport
By Kathleen Ferraro
Get Even More From Bustle — Sign Up For The Newsletter