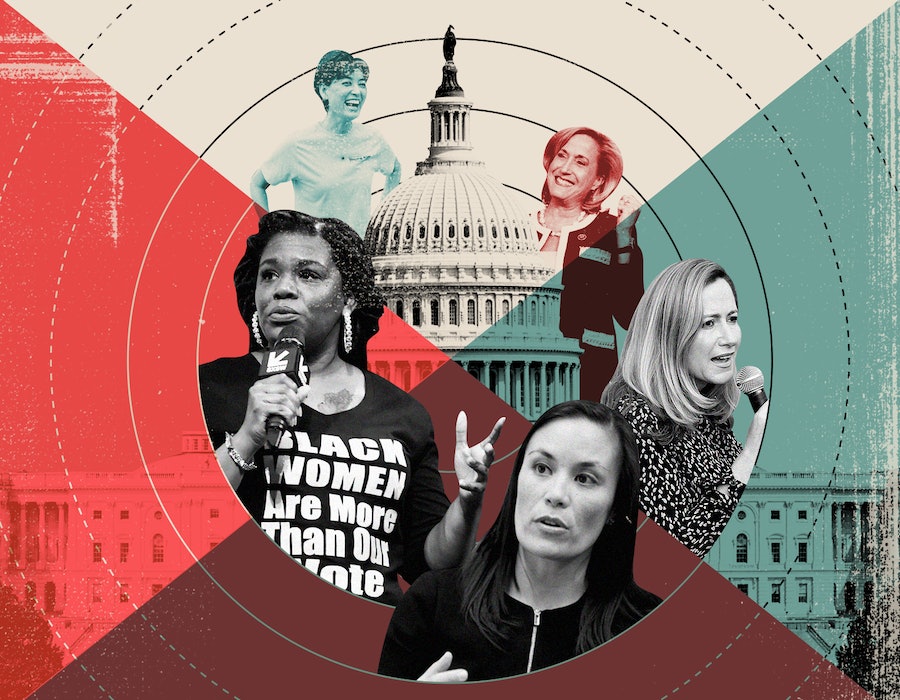 This year, there are more women running for office in the U.S. House of Representatives on major-party tickets than ever before, according to the Center for American Women and Politics (CAWP). In 2018, dubbed a “year of the woman," a record 234 women ran in the general election, which resulted in the chamber welcoming its first Muslim women, Palestinian American woman, Native American women, and youngest-ever woman, Rep. Alexandria Ocasio-Cortez.

Next week, 298 will vie for a spot in the 435-seat chamber, a 27.4% increase from 2018. The trend extends across the aisle and demographic groups. For the Democratic party, 204 women are running, making up 47.9% of the party’s total nominees. They join 94 Republican women, 22.9% of GOP nominees. Analysts expect Democrats to earn a net gain of 10 to 20 seats in the House, which would build on their 2018 majority. Below, the good news, the bummer news, and six women to watch.

Women Of Color Are Running In Record Numbers

New Mexico is likely to elect all women of color to the House, which would be the largest all-women delegation in history. Rep. Deb Haaland (NM-1) and Democratic newcomer Teresa Leger Fernandez (NM-3) are favored to win. The race in District 2, which encompasses the southern half of the state, is currently tight, between Democratic incumbent Rep. Xochitl Torres Small and Republican Yvette Herrell, both of whom are women of color.

But it's not just in New Mexico: According to the CAWP, 115 women of color have major-party nominations (82 Democrats and 33 Republicans). That includes at least 61 Black women, 32 Latinas, and six Native American women — records for each group.

According to a Bustle report, at least 11 LGBTQ+ women are on the ballot, including Rep. Sharice Davids, Georgette Gómez in California, Gina Ortiz Jones in Texas, and Beth Doglio in Washington State. And at least 15 immigrant women are running, from Rep. Debbie Mucarsel-Powell to Sima Ladjevardian in Texas. Looking at professional backgrounds, at least 15 current and former medical providers could join the U.S. House, from Dr. Hiral Tipirneni in Arizona to registered nurse Cori Bush in Missouri. And at least 60 women educators are vying for votes.

But not every state shares these rosy stats on gender parity. According to Bustle's report, in six states, no women are nominated from either major party: Hawaii, Idaho, North Dakota, Rhode Island, South Dakota, and Utah. And in 17 states, all of the Republican nominees to the House are men.

To make matters worse, four states — Alaska, Mississippi, North Dakota, and Vermont — have never sent a woman to the House. (Vermont, in a race to the bottom, is the only state that's never elected a woman to the Senate either.) Only one of those has a good shot of changing: This year in Alaska, independent Alyse Galvin is running a close race against Republican incumbent Rep. Don Young, to whom she lost by 6.6 points in 2018.

Plus, 6 Women Who Could Make History In The U.S. House

Much like in 2018, many women are expected to make history in their respective states, like Cori Bush, who's likely to be Missouri's first Black woman elected to federal office. The six below would make history on a national level.