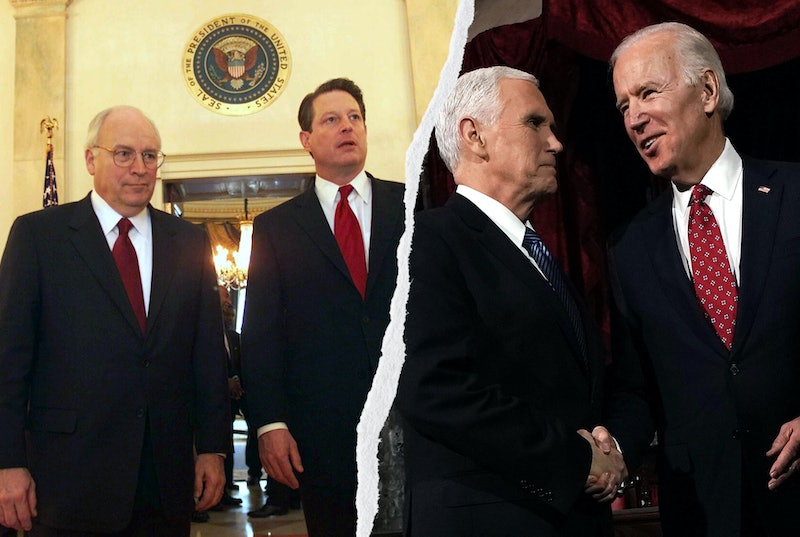 If Joe Biden is elected president in November, Sen. Kamala Harris will become the first woman and first person of color to serve as vice president. It's entirely unprecedented. But what's par-for-the-course is the role she's already started playing for Biden: as a pugnacious campaigner, like many of the men who came before her.

For my book First in Line: Presidents, Vice Presidents, and the Pursuit of Power, I interviewed every living former vice president, including Biden, and they all agreed that the VP is in a unique position to say things that a presidential candidate cannot. Harris has already proven that she’s willing to do just that — and is brilliantly suited for the role.

Since Tuesday's announcement, she's already attacking President Trump more forcefully than Biden. On Wednesday evening, during their first joint appearance in Wilmington, Delaware, Harris said that "America is crying out for leadership." She then added, “[Trump] inherited the longest economic expansion in history ... and then, like everything else he inherited, he ran it straight into the ground.” (The line has already launched a thousand Twitter battalions.)

Harris reminds me of two recent, very different vice presidents. She has the political ambition of Al Gore, who used his time as Bill Clinton’s VP as a springboard for his own presidential run in 2000. But in reality, she's surprisingly like Dick Cheney in one specific way. Though they obviously live on opposite ends of the political spectrum, neither shies away from a fight.

Think back to last summer's Democratic primary debate: Biden seemed genuinely stunned when Harris pressed him on racial issues, saying she found it “hurtful” when he talked about working with two segregationist senators. Some Biden supporters read this as a betrayal, but it also proved she could hold her own in any debate, which certainly made her a more attractive choice for a running mate.

During the 2004 campaign, Cheney seemed to follow advice from President Richard Nixon, who wrote about his own time as vice president, saying, “I found the best way to help was always to campaign for the President and never for myself ... You should always attack up and never horizontally.” Throughout 2004, Cheney focused on Bush's Democratic challenger, John Kerry, rather than Kerry's running mate, John Edwards. This allowed Bush to hover above the fray.

In Oct. 7's first vice presidential debate, expect to see a Harris-Trump debate, even though Mike Pence will technically be her opponent.

When I was working on my book, I spoke to Biden about why he'd wanted the job. He told then-candidate Obama that he wanted “to be the last guy in the room.” Biden told me, “It wasn’t a throwaway line. I meant it literally, not figuratively.” As part of my research, I received their private written document: “JRB and BO have weekly unstaffed meeting; JRB can sit in on any BO meeting; JRB must have contemporaneous receipt of all paper—All printed words that go to BO go to JRB; JRB staff must be included in any meeting with their parallel BO staff; JRB will not have a portfolio, because he will be involved in everything.”

Biden and Harris probably have a similar, very specific agreement. Harris' job is to find purpose in the supporting role, like Biden did.

After all, the vice presidency used to be a punchline. (Cue HBO's VEEP, which was based entirely on that premise.) One of President Franklin Roosevelt’s vice presidents, John Nance Garner, famously said, “The vice presidency is not worth a bucket of warm piss." According to George H.W. Bush's vice president, Dan Quayle: "The job is just awkward, an awkward job."

But in the last half-century, the role has become increasingly powerful. Presidents Truman, Johnson, Nixon, Ford, and Bush were all previous VP's. Two others — Mondale and Gore — lost in the general election. With that being said, it often doesn't happen right away. For example, Nixon ran and won in 1968, eight years after he served as vice president. So for now, Sen. Harris is settling into her new position. And if the last few days tell us anything, it seems to fit like a glove.