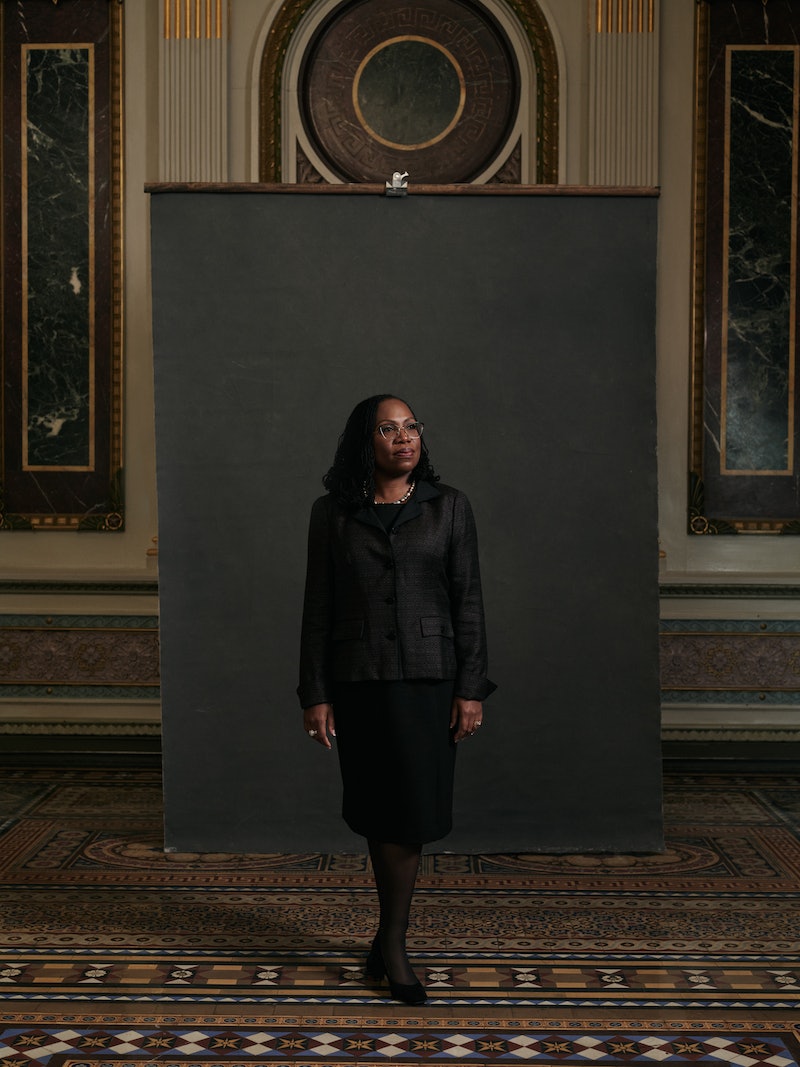 On Friday, April 8, the day after Judge Ketanji Brown Jackson’s historic Senate confirmation, she sat for an equally iconic portrait, taken by Bronx-based photographer Lelanie Foster. The image, showing the judge poised and standing, calls to mind the sense of hard work, hope, and promise defined by the judges who came before her — people like Justices Sandra Day O’Connor, Ruth Bader Ginsburg, and Sonia Sotomayor — each a first in their own right.

Foster’s picture, which has been celebrated by mononymous celebrities like Oprah and Beyoncé, came together quickly. She was officially confirmed as the photographer on the morning of April 7, and she drove overnight from New York to Washington, D.C. On Friday morning, after White House security screenings and COVID-19 tests, Foster and her two assistants had roughly two hours to set up the shoot — and a mere 40 minutes with Jackson.

Fortunately, “it was all smiles and laughs the entire time,” she says. (This is not Jackson’s official Supreme Court portrait, so the White House will defer to Jackson on its ultimate placement, according to a White House spokesperson.)

Foster, 35, credits her early years in photo production with training her to work smartly and efficiently. “I come from that mindset. Working in photo production at [the talent agency] Art + Commerce, I was immersed in fashion photography, all these big sets and stuff. I learned the importance of being 1,000% prepared,” she says, especially as a woman of color in a largely white male-dominated industry.

In her career, Foster, who’s youthful and shorter in stature, has often heard, “Oh, you don’t look like a photographer.” “Obviously, that’s not a nice comment, but people are constantly second-guessing you and underestimating you as a woman,” she says. So triumph beyond expectation is something she and Jackson share — which, for the latter, was highlighted by the intense scrutiny she faced during her four-day confirmation hearing.

In Foster’s photograph, Jackson looks sublime. She stands in front of the neoclassical interior of the Indian Treaty Room in the Eisenhower Executive Office Building (EEOB), a room which today is used for meetings and receptions. A gray seamless backdrop, clipped to a dark wood stand, separates Jackson from the building’s architecture. She and the backdrop are positioned slightly left of the hall’s Greek facade. Her face catches the glow of the studio lighting — she is pointed toward the light.

“I had the idea of bringing in the backdrop to make the composition really highlight her,” Foster says. “The focus is not just about the space, the place, and the job. It’s really about her.”

The compositional choice feels symbolic of this moment in American history. Roughly one year before, on Jan. 6, 2021, the former president stood in front of the White House, adjacent to the EEOB, and urged his supporters to march toward the Capitol. During the tumultuous beginning of a thus far unpredictable decade, Black women have stepped up in major ways as the thinkers, leaders, and organizers, all of which have been needed to recalibrate a country in crisis. Black women have continued to break down barriers in “halls of power,” which have traditionally been dominated by white people — an idea further captured by Foster’s recent work for The New York Times, for which she photographed Black students at Harvard Law School, Jackson’s alma mater.

In choosing the winning photo, Foster wanted the whole Jackson family involved, especially since they were all there: the judge; her husband, Dr. Patrick Jackson; and the couple’s two daughters, Talia and Lelia. “I made it really clear to her that I wanted her involved in selecting the image that would go out in the world, and be in the world,” Foster says. “We were in conversation the whole time, her coming up to the monitor, reacting to different images, and responding to different poses; her daughters were hopping in and giving their two cents.”

In the end, the family rallied behind one image. “She’s always beautiful,” Foster recalls Patrick saying, but the final choice carried the right amount of both “resilience” and “relief,” he told her.

It captures Jackson in her moment of victory, and clearly in Foster’s artistic voice. In addition to regular contributions to The New York Times, Foster has done campaigns for Nike and gained acclaim for her cast portraits for the film Queen & Slim. “I come from a dance background,” she adds, “so I’m always looking for serenity, graceful moments, catching somebody in a look where they are just feeling. I’m always coming from a place of honor, celebration, and gratitude.”