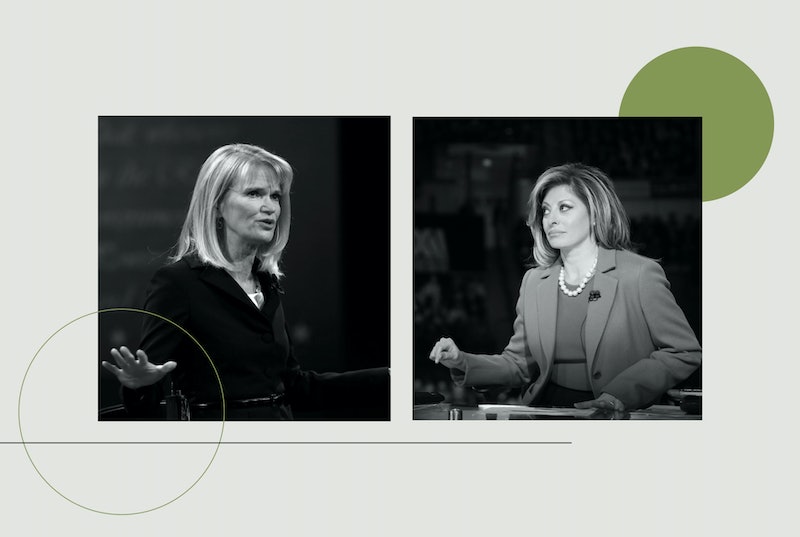 The first presidential debate was, as one reporter succinctly put it, a “sh*tshow.” President Trump barely let former Vice President Joe Biden answer questions, interrupting him as well as moderator Chris Wallace, and regularly steamrolled past his allotted time. The belligerent, chaotic tone of the whole fracas obliterated any opportunity for voters to hear the case for electing either candidate. “That was a free for all,” Martha MacCallum, an anchor and executive editor of The Story on Fox News, tells Bustle. “That was crazy, unlike anything that I've been part of.”

In advance of the second and final debate Thursday night, hosted by NBC News’s Kristen Welker, Bustle spoke with two journalists who have moderated previous debates with Trump to get their advice on how to wrangle the candidates. Martha Raddatz, ABC News’s chief global affairs correspondent and co-anchor of “This Week,” moderated a face-off between Trump and Hillary Clinton in 2016. Along with her co-moderator, CNN’s Anderson Cooper, she posed sharp questions and pressed for follow-ups, earning praise for her commanding performance. Maria Bartiromo, the global markets editor and anchor at Fox Business and Fox News, moderated a pair of Republican primary debates in the 2016 cycle with colleague Neil Cavuto, deftly corralling the crowded field of GOP hopefuls.

Thursday's stakes are high: Trump has only recently recovered from COVID-19 and is sure to face pointed questions about his handling of the coronavirus pandemic. Biden, meanwhile, has a double-digit lead in the swing state of Pennsylvania, and the two candidates are deadlocked in all-important Florida. “I think we're going to see a different tone this time around,” MacCallum adds. “They're going to be muted during [their opponents’] first exchanges, and two minutes is actually a pretty long time.”

Below, Raddatz and Bartiromo explain how a moderator can be most effective — and make watching a debate actually bearable.

What are your tips for being in the moderator’s chair?

Maria Bartiromo: Make sure you have a very good understanding of the issues at hand. Understand and anticipate both sides of the argument. Ensure that you’re asking the questions that the viewer wants answered, and do it calmly and steadily so as not to raise emotion in any way. And ensure that each candidate is getting the same amount of time and a fair platform.

Martha Raddatz: One of the things that I arm myself with is being a mother. You have to take control as early and as often as possible. You go in there with that attitude of, “Look, I’m in charge here. I’m the boss of the debate right now.” You want fair and free exchanges between the candidates. But particularly after the first debate, you don’t want it to be out of control.

How do you assert yourself and maintain control without it becoming a sparring match between you and the candidates?

Raddatz: You do not want to become the story. You are not there to debate that candidate. You’re there to guide the conversation and to ask questions, and to try and control that debate. At a certain point, if they’re not going to answer the question and they’re not going to stay with the format, I think you do have to remind them what the format is and what they agreed to.

How do you prepare for debates?

Bartiromo: It starts with preparing with your team and ensuring that you are getting all of the subject buckets on the table. And then what I normally do, and this is basically what I do for all of my interviews, is I am calling people — people who are informed, who understand the issues, [and] who are impacted by the issues. Then once I have confidence that I understand it, [we] can start narrowing it down and zeroing it in to specific, pointed questions.

Raddatz: We studied topics in the deepest dive possible, [so that] we had our facts going in. You’re not the fact checker, but your questions can contain those facts — “So-and-so says this,” and, “Respond to that.”

What are some traps that moderators can fall into?

Bartiromo: One is to spend too long on one issue. You’ve got a set amount of time. Depending on how important the issue is, that will dictate if you have one, two, or three follow-up [questions] on that. But at some point, you must move on.

What will you be watching for in Thursday’s debate?

Raddatz: I’m going to try and listen for real substance in this and try to see differences in the candidates. Really, what would a second term of President Trump look like? What would a first term of a President Biden look like?