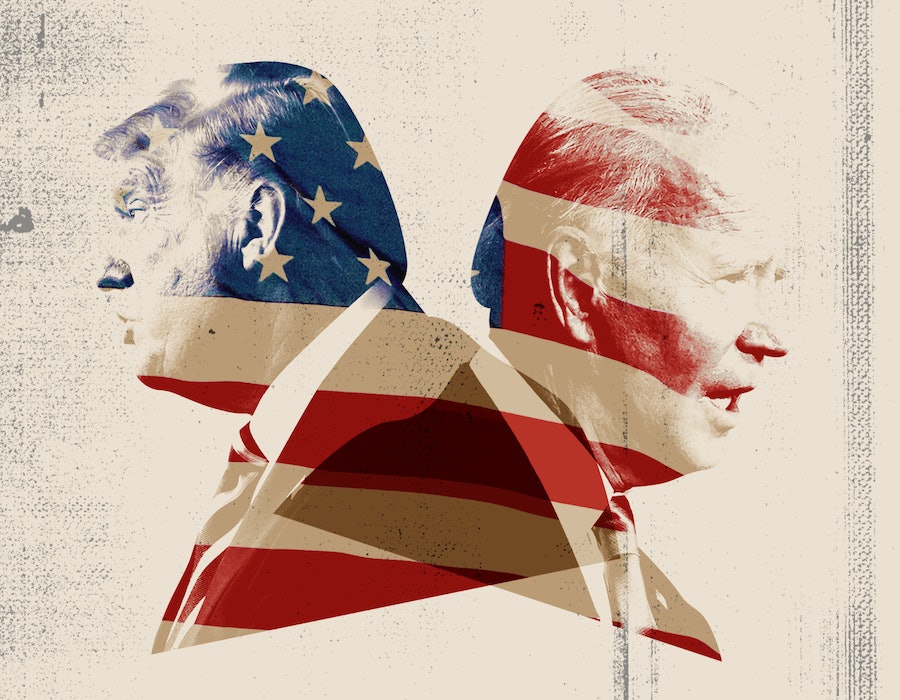 During the first presidential debate, moderator Chris Wallace asked President Donald Trump to publicly disavow white supremacists. Wallace, a longtime journalist at Fox News, was in the midst of a section on "race and violence in our cities," two topics that shouldn't have been conflated in the first place. What he intended to probe, based on his line of questioning, was racial unrest in cities after a number of Black Americans were killed by law enforcement. He meant to ask about racism, not race.

When Trump rebuffed and pivoted, Wallace, in one of his stronger moments of the evening, persisted. "Are you willing, tonight, to condemn white supremacists and militia groups and to say that they need to stand down?" Again, Trump deflected, but not before name-dropping the Proud Boys, a far-right group in Portland, Oregon. "Proud Boys," Trump said, "Stand back and stand by." Merriam Webster's Twitter team jumped in to distinguish the the two terms online:

'Stand back': to take a few steps backwards

'Stand by': to be or to get ready to act

I don't know who "won" the first presidential debate. It certainly wasn't Trump. It may have been former Vice President Joe Biden. A CNN poll, conducted by SSRS directly after the event, showed that 60% of viewers thought Biden had won, compared to 28% for the president. It definitely wasn't the American people. The American people lost.

As Biden pointed out during one exchange, even Trump's former campaign manager, Kellyanne Conway, has acknowledged that violence helps Trump's cause. In her full response, from a late-August interview with Fox & Friends, she says, "The more chaos and anarchy and vandalism and violence reigns, the better it is for the very clear choice on who's best on public safety and law and order." Last night, the president stoked that chaos again. (He also said the verified Conway quote was fake.)

The night often felt like a playground free-for-all. Trump ignored the pre-approved condition that candidates get an uninterrupted two minutes to respond to questions. He interrupted Biden and Wallace repeatedly, to the point that conversations about policy and platforms were rendered impossible. Within the first 30 minutes, Biden said to him, "Will you shut up, man?" He reiterated this point in various ways, from "Will you just shush for a minute?" to "It's hard to get any word in with this clown." Even Wallace attempted — albeit poorly — to control the interruptions from the president.

One of Biden's more effective tactics was talking directly to viewers. In a section about COVID-19, in which Trump boasted about the failed U.S. response, Biden said to the camera, “Do you believe for a moment what he’s telling you in light of all his lies he’s told about COVID?” The tactic showed one of the strategies Biden's campaign is hoping will stick: his empathy and ability to connect with voters on an emotional level.

The 90 minutes were a slog. Viewers hopped online to suggest structural changes for the next two debates, like the moderator having access to a mute button, a point reiterated by The Washington Post's Margaret Sullivan in her post-debate analysis. Just moments after the debate wrapped up, CNN's Dana Bash offered a blunt indictment that will surely stick: “That was a sh*tshow," she concluded.