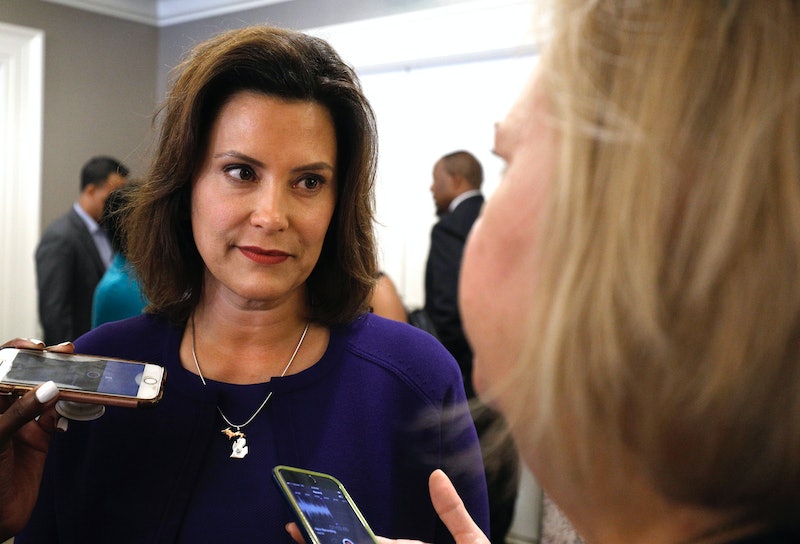 Gretchen Whitmer's favorite time is between 5 and 6 a.m, a bit before the 6:33 a.m. sunrise in Lansing, Michigan. “It's when I drink my coffee and catch up on the news,” the Michigan governor tells Bustle. “No one else is up, so I can get a lot done.” Like many Americans, Whitmer is spending more time working from home. She's even watched Netflix's Tiger King with her teenage daughters. But large cats aside, her routine couldn’t be more different. For one, she actually loves Zoom calls. “I have to tell you, those Zoom calls have been a godsend,” she says. “I am a people person. That's why I'm in public service.”

Once the sun rises, Whitmer — or “that woman from Michigan,” as President Trump called her — spends her days fielding a constant stream of information, public health updates, and criticism. She says the scrutiny hasn’t shaken her. “We all should be on the same team," she says. "Our common enemy is a virus. It's not one another.”

Michiganders are familiar with Whitmer’s polite, no-nonsense persona. (In our interview, she stopped a response to say “bless you” to a colleague who sneezed.) She served in Michigan’s state legislature for 14 years, both as a representative and senator. When she left the state Senate five years ago, she had no plans of running for governor in 2018. “I thought I was done with running for office,” she says. “Then it became clear that we really needed new leadership in the state, and I threw my hat in the ring.”

I'm grateful to be in this role. This is where I want to be.

In the last two months, Whitmer’s reputation has spread nationally because of her responses both to the coronavirus and Trump’s verbal attacks. (Last month, Saturday Night Live’s Cecily Strong imitated her accent and love of “local” beer. She responded with a care package.)

Currently, Michigan has confirmed more than 43,000 cases of the coronavirus and 4,049 deaths. As of May 4, Michigan’s coronavirus case fatality rate was 9%, compared to the 5.8% national rate. On March 10, the day Michigan’s first COVID-19 case was confirmed, Whitmer declared a state of emergency, which included restricting vacation rentals, travel between residences, and public gatherings. Less than two weeks later, on March 23, she issued a stay-at-home order. On April 30, she extended the state of emergency, against the support of Michigan's Republican-controlled legislature.

The president has called her an “inept” leader who “doesn’t have a clue.” While other Midwestern states plan to begin reopening in May, Whitmer has resisted offering a timeline, further angering some constituents.

A few weeks after Trump’s name-throwing, armed protesters flocked to the Lansing state house, and then to her residence, pushing for her to re-open the state. On Thursday, April 30, hundreds more, many armed and most without masks, stormed the state house while a legislative session was in progress. (Whitmer herself was not at the capitol.) She has been compared to Hitler, and one protester carried a brunette doll with a noose around its neck. Whitmer seems unfazed. “There's a lot of frustration. It's understandable,” she says. “But a vast majority of people in this state have done the right thing. They've taken this seriously, and because of [their] sacrifices, we’ve seen our curve start to flatten.”

The governor is unfortunately familiar with death threats. In January, Whitmer wrote a letter to Facebook urging the social media giant to improve safeguards against hate speech on its platform. She referenced threats of violence and vulgarity targeting her and other women lawmakers in Michigan. In response, Facebook issued a statement saying they were working with her to address the concerns.

“I have not felt in danger and I don't think anyone in my family has,” she says of the latest wave of protests. “If it makes people feel better to direct their frustration at me, that's OK. I've tried to make sure that my kids understand that's a part of the job that I have.”

Of late, her name has circulated for a new job: Joe Biden’s vice presidential candidate. Would she accept the position, if offered? “I'm not going to go down that path with you, although I give you kudos for trying,” she says. “I would just say this. Even in the toughest days of this crisis, I'm grateful to be in this role. This is where I want to be. All the energy I have is being thrown into trying to make sure people are protected in Michigan, trying to get more testing and tracing. Everything I'm doing revolves around getting that done, and doing it right.”

If it makes people feel better to direct their frustration at me, that's OK. I've tried to make sure that my kids understand that's a part of the job that I have.

In order to prepare for the “marathon-long sprint” of managing the next phase of the coronavirus crisis, she’s finding time to exercise, reflect, and even moonlight as a hairdresser. “I cut my daughter's hair the other day,” she says. “I've gotten much better at giving haircuts.” While her current schedule doesn’t offer time for baking, Whitmer says she’s “a beneficiary” of her eldest daughter’s adoption of the country's pandemic pastime.

By 10 p.m. at the Whitmer residence, it’s lights out — but first, the governor searches for some good news. “I look for sources of inspiration,” she says. “Stories of the grocery clerk, the nurse or doctor, the paramedic. That's what's helped me keep perspective through this.”

More like this
What The Lionesses’ Win Really Means For The Future Of Football
By Angelina Kelly
Talking About Mental Health In Sport Is Crucial, Says England Legend Karen Carney
By Sam Ramsden
Meet The Young Leaders Fighting For Global Change
By Sam Ramsden
Are John Legend & Kanye West Still Friends? The Singer’s Latest Update Is Candid
By Brad Witter
Get Even More From Bustle — Sign Up For The Newsletter