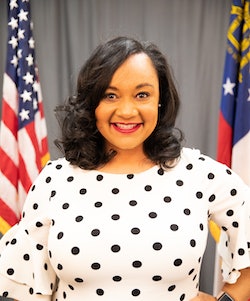 On July 20, Georgia state Sen. Nikema Williams was chosen as the democratic candidate to replace the late Congressman John Lewis, who passed away on July 17 after battling pancreatic cancer. He was 80 years old. Williams will face off with Republican candidate Angela Stanton-King in November to serve a two-year term for the Atlanta district. (Georgia Governor Brian Kemp is responsible for setting a special election date, to vote for who will serve in Lewis’s place until then.)

Congressman Lewis served 17 terms for Georgia's fifth congressional district. He left behind a legacy of civil rights activism and fighting to ensure the right to vote, having marched at Selma and spoken at the 1963 March on Washington. After his death, the Georgia Democratic Party needed to announce his successor by July 20. Williams was announced at 4:30 p.m., out of 131 applicants for the position.

Williams, who is the chair of the state’s Democratic Party, joined the state legislature in a 2017 special election. She was the first Black woman to lead the party, and currently serves on the Executive and Resolution Committees of the Democratic National Committee.

In 2018, she was arrested at the Georgia state capitol for protesting alongside her constituents for voting rights. (Governor Kemp has been accused of widespread voter disenfranchisement during his time as governor and, previously, as secretary of state.) She was detained for five hours by police. “I was not yelling. I was not chanting,” she said after the incident, according to the Atlanta Journal-Constitution. “I stood peacefully next to my constituents because they wanted their voices to be heard, and now I’m being arrested.”

Williams was seen as the front-runner for Lewis’s spot due to her ties with the district and party, and with Lewis himself. Her husband, Leslie Small, worked on Lewis’s congressional campaign and was an aide to the late congressman. Now, Williams is expected to earn an Election Day victory in the historically blue district.

She also has deep roots with the reproductive rights community, having previously served as vice president of public policy for Planned Parenthood Southeast.

Alexis McGill Johnson, president and CEO of Planned Parenthood Action Fund, congratulated Williams in a statement following the announcement. "While a giant like John Lewis is irreplaceable, Planned Parenthood Action Fund couldn’t be more proud of Nikema,” McGill Johnson said. “We look forward to working with her in her new role, fighting together to make Georgia and the nation a healthier and safer place for all who live here.”