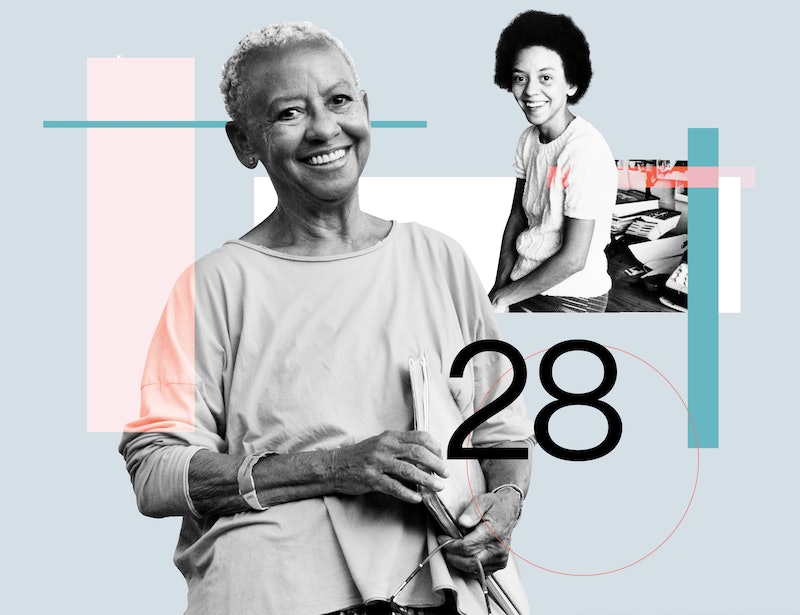 In Bustle’s Q&A series 28, successful women describe exactly what their lives looked like when they were 28 — what they wore, where they worked, what stressed them out most, and what, if anything, they would do differently. This time, poet Nikki Giovanni reflects on self-publishing, and the advice she gives her students now.

At 77, Nikki Giovanni still doesn’t have a filter. “I say all the time, I say it to my students, I'll say to you or anybody else,” she tells me over the phone from Virginia. “If Hitler had married Satan, their first child would be Donald Trump, because you just couldn't get more evil than that.”

This unflinching openness is part of what raised Nikki, as she prefers to be called (“It’s just as easy and I don’t have a weak ego”), through the ranks of the American literary canon. As a poet and professor, she’s won seven NAACP Image Awards, and received nominations for National Book Awards and Grammys. Of her dozens of anthologies, essay collections, and children’s books, three have appeared on the New York Times best seller list, and she’ll release her 34th (!) poetry collection, Make Me Rain: Poems and Prose, in October 2020.

But she was already making waves at age 28, and as we talk, I keep wondering when she’s going to start name-dropping. She self-published her electrifyingly vernacular poetry to wild success, selling about 20,000 copies of her first two collections, and was already recognized as one of the preeminent artists of the Black Power generation alongside fellow writers and activists like Angela Davis, Toni Morrison, and her good friend Maya Angelou. She also interviewed James Baldwin for PBS, appeared alongside luminaries like Muhammad Ali and Stevie Wonder on Soul!, the popular TV show she also helped produce, and beamed from the cover of Jet, looking like she has much more interesting things to do than be a magazine cover girl. After all, this is the woman who wrote the poem “Ego Tripping (there may be a reason why)” when she was just 25:

I am so perfect so divine so ethereal so surreal

I cannot be comprehended

except by my permission

When I ask her about those now-classic lines, Nikki laughs (her humor and charisma are famously off-the-charts). “I'm a Black American, of course. And so one of the first things you learned in Sunday school — and this is the history of my people here in America — if anybody asks you who you are, tell them you’re a child of God.”

Looking closely at her work, it’s clear that Nikki has always been more interested in the little pleasures of the everyday. While we talk, she delights in describing the lovely bouquet that has just arrived from a family friend, and the oysters she’d splurge on as a young woman in downtown New York. She also regularly signal-boosts other’s accomplishments: a “wonderful” dean at University of Pennsylvania’s school for social work, who submitted her writing to Columbia University’s burgeoning MFA program in the 1960s, and the bright student at Virginia Tech (where she’s a university distinguished professor in creative writing) whose poem is still one of the best she’s ever read.

“I wasn't trying to take on the world,” she tells me of her life at 28. “I was just trying to find what was interesting to me.” Below, Nikki takes us back to Greenwich Village in 1971, where she built friendships with gangsters, hustled to sell poems, and discovered true self-love.

Though I didn’t attend long, I was attending Columbia University. They had just started an MFA program. I needed to go to grad school, because I didn't really have a job or any money.

You had already achieved so much by then — publishing two books, and making a name as a poet. But did it feel that way to you? Did you already feel successful?

I just thought, "Well, this is wonderful." I was writing poetry that nobody at that time cared anything about, and that was understated. But in New York there were printers, and I met a friend in Greenwich Village who worked at one. So that’s how I published my book Black Feeling, Black Talk. Four hundred books only cost me about $50 to print, so I was able to save something.

What was your big break?

I had a book party at Birdland, the jazz club. I went to the owner, Mr. Harold Logan, and asked him if we could have the club on a Sunday… Mr. Logan was actually a gangster, but a lovely man aside from that. We all have our faults.

Birdland was next to The New York Times. And at about 4:00 or so, the line started building up. I brought my next-door neighbor, who was not famous then, who was Morgan Freeman, and also my good friend Novella Nelson; we had a lot of good people going. So The New York Times sent a reporter down, and… it’s too funny. When he finally came up to me, he said, "Where's Nick Giovanni?" I said, "I'm Nikki Giovanni."

I thought, "OK. You work that one out, and then come back to me." And he did!

But it was just incredibly packed. The New York Times had not seen a poetry reading like that. And I made the Arts section. That's what really put me on my feet for my career.

What did you and your friends talk about at 28?

Half the things that you're going to ask me, I'm going to start answering with, "I hate to say." But I'm not really what you call "friendly." So I didn't have what you call a lot of friends. Somebody else said it — I wish I could remember now who — that "all you need in life is a few good friends and a few good books." I think that he probably should've said "and some music." And that's all. So I didn't have a lot of people around me. It wasn't that I didn't like people, but I've always been greatly cautious around people. I still am.

The first book of yours that I read was Love Poems, maybe when I was 20. And it’s extremely sexy. Did you feel sexy at age 28?

What else did you love when you were 28?

Boy, what a joy when I had a good night selling books and I could look down and say, "Oh, my goodness. I've made $50." With $50, I could go to a real restaurant and have what is still probably my favorite meal. It starts with oysters on the half shell, and I really love Kumamotos. I'm always thrilled when Kumamotos are in season. They are so good. So I have my oysters on the half shell and I have my steak and I have my baked potato and I'm incredibly thrilled.

You teach poetry to college students at Virginia Tech. Most are younger than 28, but what do you hope you’re teaching them that you wish you’d known then?

I have a writing game I play with my students that I think is important. I say to my class: "I want you to write me a poem or a short story. And in it, you tell me what's enough, what ‘enough’ means to you. When will you know you have done enough?”

That's such an interesting and frightening question, too, because you're the only one who can answer it.

Yeah, if you're smart. If you start to feel like, "I have not done enough," you start to cheat and lie and feel bad about yourself.

You have to wake up in the morning and look in the mirror and say, "I'm still here, and I'm going to do whatever good I can do." That’s what you have to know. And still, you have to know when you've had and done enough. That keeps you sane.

More like this
At 28, Rosie Perez Risked Her Career To Stop Playing Stereotypes
By Gabrielle Bondi
24 History-Making Black Women You Probably Didn't Learn About In School
By Ayana Lage and JR Thorpe
Watch Jacinda Arden’s Devastatingly Honest Resignation Speech
By Sam Ramsden
25 Inspiring Quotes From Black Women To Celebrate Black History Month
By Kyli Rodriguez-Cayro and JR Thorpe
Get Even More From Bustle — Sign Up For The Newsletter
From hair trends to relationship advice, our daily newsletter has everything you need to sound like a person who’s on TikTok, even if you aren’t.