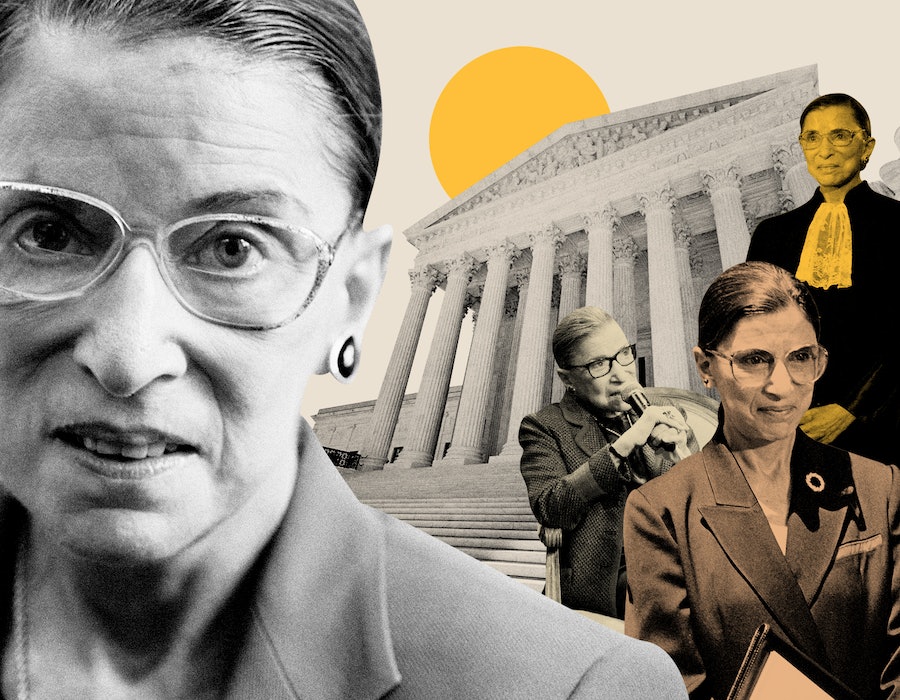 I learned that Ruth Bader Ginsburg had died while I was sitting on the tarmac at JFK, the news appearing unexpectedly between posts about Friday night drinks on Instagram. I was waiting to fly home to the UK to see my family for the first time in eight months, and when a 10-minute delay turned into a half-hour one, I sat glued to my phone as my feed flooded with vintage RBG photographs (great earrings), digital illustrations (with Notorious-style crown), and graphics of the trailblazing justice’s own words. It’s the latter that I found myself returning to during the sleepless flight.

There are surely few figures in living memory who have done more to advance the agenda of progressive causes than Justice Ginsburg, particularly when it comes to women's rights. Even so, I was struck by how strange her advocacy of genial persuasion sounds in 2020.

Her death comes on the heels of a summer of confrontation, when Confederate statues toppled, high-flying executives resigned, and state governments made meaningful moves toward police reform. This is the very real power of anger, but as President Barack Obama wrote after the George Floyd protests, "eventually, aspirations have to be translated into specific laws and institutional practices," and that tends to require some of the radical pragmatism RBG advocated for. This is especially true at a time when the country remains severed down the middle, with a recent PEW study finding that only 18% of Americans think the country has become more united during the COVID-19 crisis, the lowest percentage among 14 advanced economies.

As Instagram's characteristic mix of calligraphy, illustration, and block text quotes reminded me, RBG knew there was a value in keeping your eyes on prize and choosing the most efficient route to get there. Sometimes, that means biting your tongue. “She taught me that the way to win an argument is not to yell," her granddaughter Clara Spera told filmmakers in a 2018 documentary, "because that will more often turn people away rather than bring them to your table.”

On other occasions, it means covering your ears. “When a thoughtless or unkind word is spoken, best tune out. Reacting in anger or annoyance will not advance one’s ability to persuade,” she wrote in her 2016 book, In My Own Words, advice that's especially prescient now that riling and dividing liberals is the driving force behind's President Trump’s own reelection strategy.

It’s easy for those not impacted by injustice to ask its victims to wear it lightly, to fake-smile through so-called debates with people who won't acknowledge the material facts of their oppression. But these aren't the communities that need to do the messy work of tactical engagement the most.

The media has spent a lot of energy considering how to be a good ally in 2020, and while Google searches for "allyship" peaked in June, more revealing than the spike itself is the map sharing where most searches came from (New England and the West Coast) and where there was little interest (Louisiana, Kentucky, South Carolina, Alabama) or none at all (North and South Dakota, Wyoming, New Mexico).

Those who exist comfortably in the latter states should be using their capital in the way RBG suggests to persuade and bring people to their side. It's also a good rule of thumb for working within imperfect institutions, be they legal, political, or corporate, where change is often especially slow or out of one's direct control. While such strategies might mean imperfect progress, as President Obama told Ta-Nehisi Coates in 2016, we shouldn't dismiss the value of small steps forward.

"I always tell my staff, 'Better is good,'" he said. "I’ll take better every time, because better is hard. Better may not be as good as the best, but better is surprisingly hard to obtain. And better is actually harder than worse."

By the time my plane landed early on Saturday morning, the internet was awash with takes on how to move forward, and as I waited for my luggage at the baggage carousel, it was the words Rep. Alexandra Ocasio-Cortez shared on Instagram Live that caught my eye:

Voting for Joe Biden — it's not about whether you like him or not. It's a vote to let democracy live another day. That’s what this is about. We need to act in solidarity and protection for the most vulnerable people in our society, who have already experienced the violent repercussions of this administration. And the reason we need to do that is because yes, the political middle is willing to sacrifice immigrants. The political middle, too often, is willing to play both sides, when someone dies to police violence. Absolutely. That’s why we need to show up. We need to show up, because if we don’t show up, those people don’t get protected. Because no one politician is the answer. No one president is the answer.

It’s hard to imagine Rep. Ocasio-Cortez offering such a straightforward statement of the value in an electoral coalition before RBG’s passing. Justice Ginsburg’s life taught us many things, but it may be her death and the urgent need to hold a soon-to-be radically conservative Supreme Court to account that reminds us of the need for a broad consensus, not a narrow one. This requires different types of leaders — the Ginsburgs and the Ocasio-Cortezs — and while the methods of the former might appear too moderate to some, with unexpected friendships and choices that present like assimilation, as RBG's legacy attests, the results can be anything but.