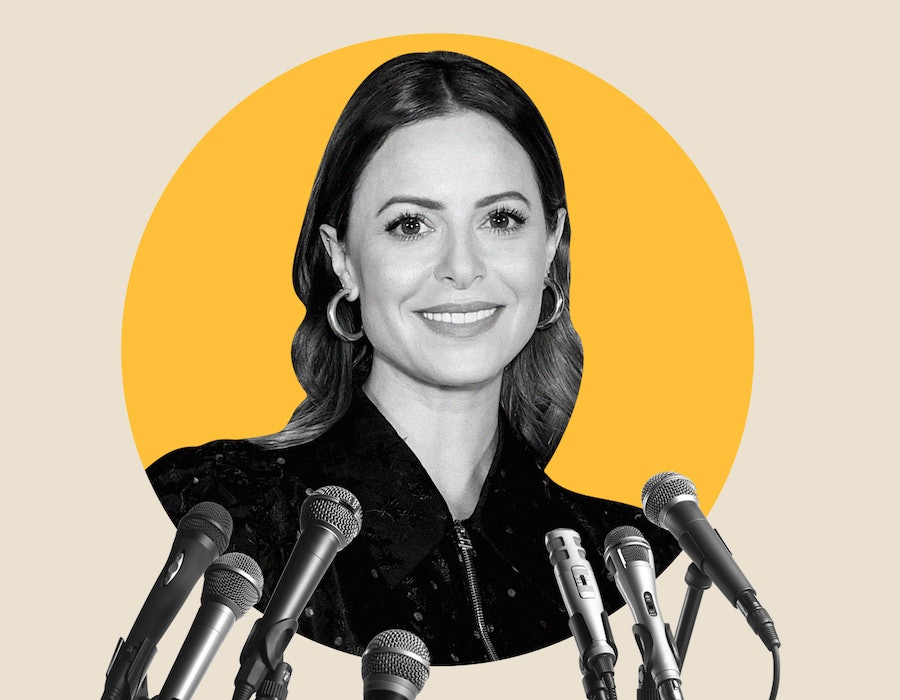 Sophia Amoruso is no stranger to reinvention. With Nasty Gal, her 2006 digital marketplace for vintage clothes, she raised more than $50 million in funding. But by 2015, Amoruso had resigned as CEO. The clothier was facing accusations of creating, ironically, a “nasty” culture, and not long after, the company filed for Chapter 11 bankruptcy. The year before, she'd published her 2014 memoir, #GIRLBOSS, which would go on to sell more than half a million copies. Netflix transformed the career manifesto into a same-named television show, which Amoruso executive produced. (The series, starring Britt Robertson, was canceled after its first season.) In the years since, Amoruso’s Girlboss Media, the brand she launched shortly after leaving Nasty Gal, grew into an events empire — and then COVID-19 hit. Globally, in-person conferences were replaced with Zoom cocktail hours and virtual panels. In June, Amoruso stepped down as CEO, and a majority of the team was let go.

It's an understatement to say that Amoruso’s had a front-row seat to serious entrepreneurial drama. Still, her optimism is matched only by her desire to keep building. She talks to Bustle about her new project, company culture, and the term she famously coined.

This month, you’re launching Business Class. Why you, why now, and why flight-themed?

I've accumulated 15 years of experience as an entrepreneur. I experienced the highs and lows. I bootstrapped a business to $30 million [in revenue]. I've also dealt with investors and I've been on the other side of what happens when you really scale a business. There's never been a more important time to share because everybody is pivoting in real time. So many of us have been laid off. People are taking their careers into their own hands because they've been forced to with the current workplace climate. And the name was accidental. I was on a hike with my boyfriend, and I threw out "Business Class." There are so many puns — Business Class gives you wings, Business Class can be your passport to a successful business — and I'm such a sucker for puns.

You've mentioned that Business Class will cover “turbulence.” How do you distinguish turbulence from catastrophe, and when to pivot versus move on?

I've experienced my fair share of turbulence on a very public stage. I learned pretty much everything the hard way. [In business], challenges will come. Expect them. You can come up the other side better, and laugh about [it]. You can project yourself into the future and say, "Oh my gosh, this is going to be such small beans a year from now." That's really aided me. But when you're not having fun for a long, long time, then it's time to consider throwing in the towel or pivoting.

In the past few years, many female-founded companies, which marketed themselves as havens for women, have been criticized for having cultures that didn’t match that messaging. People have written about the demise of the “girlboss.” How do you feel about how the term has taken on a life of its own?

The best thing you could ever ask for is for something you put out in the world to become a part of the zeitgeist. Girlboss was a really hard name to protect. Everybody was using it. Forever 21 had girlboss shirts; Etsy is drowning in girlboss merch; there are more than 20 million hashtags with #girlboss on Instagram. It became a calling card for a generation of women who were taking their careers into their own hands. I know Girlboss, both the book and the business, inspired a lot of women to start businesses and build wealth for themselves. At the same time, it became a word [for a] generation of mostly white female entrepreneurs, who built millennial businesses that on the outside seemed like feminist utopias, which nobody's ever pulled off at scale.

Do you think it's possible for a company to be feminist and also a for-profit organization within a capitalist system?

If you don't establish your culture on day one, it scales into a mess. Nasty Gal was unintentional. I had no idea what culture was. And when that unintentional culture failed, it was like the Tower of Babel. Part of the reason I built Business Class is to make sure that entrepreneurs at the beginning stages of their careers are exposed to their unconscious bias, [and what they need to] build and manage diverse teams. We have a module with Victoria Bell, who founded Black Women @ Facebook, on specifically that.

In the wake of Business Insider’s recent story about Rent the Runway, journalist Jessica Lessin tweeted, “I look forward to a world where female leaders don't have to be scared sh*tless about press coverage.” You’ve experienced negative press firsthand. What’s your advice for women founders who are nervous about talking to media?

I'd say, don't talk to the media until you have a story. Talk about your results, not what you're going to do. I've talked a lot about what I'm going to do, and now I only want to talk about what I've done. Be confident that you're living up to the values you've preached before putting yourself in a position to be called a hypocrite.

You’ve often shied away from saying there’s a double standard when it comes to coverage of women founders versus their male peers. Why?

Each experience is unique. For me to comment on the fairness of the experience of my peers? I'm not in a position to do that. What I can say is that when the world says something about you at scale, it's important to look in the mirror. Nothing is completely unfair. When you're in a position of power, victimizing yourself is just so narcissistic, because you inherently are so much less damaged than the people who work for you, who aren't in the same financial position of power. Do you know what I mean? No matter what I've experienced, I can look around at my life and say, "What can I learn from this?" But also, "Wow, I am so fortunate.”

More like this
Jurnee Smollett’s Heart Is Healing
By Rebecca Carroll
For These Abortion Clinic Volunteers, Going TikTok Viral Is A Risk Worth Taking
By Audra Heinrichs
Tory Burch Wants To Uplift Other Ambitious Women
By Allie Fasanella
What Is the Net Worth Of Each 'Stranger Things' Season 4 Cast Member?
By Hugh McIntyre
Get Even More From Bustle — Sign Up For The Newsletter