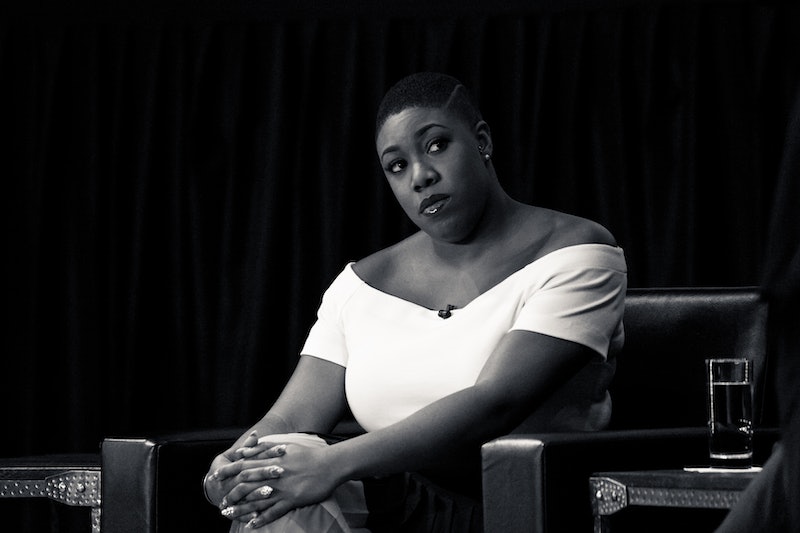 Symone Sanders is getting ready for a fundraiser. In front of her bathroom mirror, she draws a bold, black line across her eyelid. Her nails are studded with rhinestones, courtesy of press-on nails she picked up from a drugstore across the street from her Washington D.C. apartment. “I’m finishing my fundraiser makeup, so we can chat while I do that,” Sanders tells me. Her phone slips off the bathroom counter several times, a hazard of near-constant video chatting during self-quarantine, but the 30-year-old doesn’t miss a beat. With the candid tenor of a best-friend catch-up, she tells me she sometimes starts off Vice President Joe Biden’s day with pop-culture headlines. “I’ll be like, ‘You want to know what the streets are saying?’” she says. “I try to find him something he’s not regularly hearing or seeing.”

The Omaha, Nebraska, native currently serves as a senior adviser on Biden’s presidential campaign, following a 2016 role as Sen. Bernie Sanders’ press secretary, a job she started at age 25, just two years after graduating from Creighton University. Heading into the 2020 primaries, she was courted by Sens. Elizabeth Warren, Kirsten Gillibrand, Kamala Harris, and Cory Booker. Being an unapologetically young black woman pursuing a career in politics seems revolutionary for a country that’s been historically led by older white men. She wants to change that.

Sanders documents her rise to influence in her new memoir, No, You Shut Up: Speaking Truth to Power and Reclaiming America (out May 19). It’s all about balance, she says over Zoom. “When I got to D.C., I was like, ‘I know I’m not supposed to be dressing like this,’” she says, gesturing to her colorful outfits and bedazzled nails. “But I’ve always been in environments where there aren’t lots of people like me doing the work I want to do. Nobody gave me pointers.”

Her job focuses on crafting Biden’s campaign messaging and acting as his on-camera surrogate, among other things. “If you want the system to change, you need to be strategic,” she says. “You need to infiltrate the apparatus.” This is an idea the communications strategist returns to often. When I ask if running for office is part of her plan to change the system from within, she demurs: “Everybody thinks I’d make a good candidate, [but] I’m just the people that help get people elected.”

Much like her book, our conversation is primarily limited to quotable soundbites. In both, she balances autobiographical storytelling with advice. (“Clear space for your goals,” she writes, and “know your own boundary lines.”) The juxtaposition gives a taste of how Sanders imagines her brand: a mashup of campaign formality and Instagram-era motivational prose. “I wanted to give people a little real talk,” she says when I ask about it. “If people get the audiobook, I change my voice when I’m reading the advice sections, like, ‘Come here, let me tell you.’”

The title of Sanders’ memoir pulls from real-life experience. During a CNN interview in 2017, while working as a political commentator on the network, she got into a heated exchange with former Virginia Attorney General Ken Cuccinelli about President Donald Trump’s response to the violence at the white supremacist Unite the Right rally in Charlottesville, Virginia.

“Can I finish, Symone? Will you just shut up for a minute and let me finish?” Cuccinelli snapped on live TV.

“Pardon me, sir,” she responded. “You don’t get to tell me to ‘shut up’ on national television.” The conversation erupted, and anchor Chris Cuomo stepped in.

Returning to a presidential campaign with a different, more centrist candidate — particularly one facing a sexual assault allegation — hasn’t happened without scrutiny. Biden’s platform shares none of the hallmarks of Bernie Sanders’, such as support for single-payer health care or canceling student debt. “I didn’t 110% agree with Bernie on every issue while I was working for him,” she writes in No, You Shut Up. “I don’t agree with Biden on every issue, in every instance. But I think in order to make change we have to make strategic decisions.”

She started getting biting voicemails from critics about the switch, in addition to vitriolic emails. “I’m used to harassing emails. That doesn’t make it OK, but I’m used to it,” she says. “You have to give it a shrug and move on, but sometimes it affects me. I’m human.”

At this time in a typical election cycle, Sanders would be on the road between campaign stops. Instead, Biden is holding “virtual events” from his basement in Wilmington, Delaware. His senior adviser, who would normally be by his side, lives more than 100 miles away. “Rallies show the best of America,” she says, of the in-person variety. “People stand in line for hours to get a glimpse of a person. That means [they] still have hope. And while there are true inequities in this country — I mean, a young black man was murdered jogging in his neighborhood; you shouldn’t have to go viral to underscore your humanity — being on the campaign trail gives me hope.”

When our conversation moves to the allegation against Biden from his former Senate staffer Tara Reade, Sanders puts down her makeup brush and moves to the living room.

“‘Believe women’ doesn't take a different definition because now the allegation is about my boss,” she says from her couch. “Truth and justice don’t have asterisks next to them. It's not easy for anyone to be accused of something, especially something they’ve said did not happen. But what’s most important is that in this [political] space, women have the ability to come forward. At the end of the day, what matters is the truth. And in the case with Vice President Biden, the truth is that it didn’t happen.”

Later, I ask her about a line from her book that surprised me: “Change takes time, but change also can’t wait.” It reads like a convenient disclaimer, I tell her. She lets out a knowing chuckle, and harks back to the fight for civil rights, to Martin Luther King Jr., and then to her dad, whom she says fought against structural injustices.

“My dad was 64 years old when he died unexpectedly,” she says. “He grew up in the segregated South. He knew what overt racism looked like. The fruits of his labor, the things he committed his life to, he never got to see,” she says of the chemist for the Army Corps of Engineers. “But his work made a difference.”

Sanders thinks young people today are too impatient. She says our generation has been “tarnished” by a desire for instant gratification.

When Sanders writes about “the apparatus” — which she does more than 70 times — she’s often referring to the people who have access to power rather than a broken system in itself. “We can’t simply critique the machine that makes the Democratic Party or the Republican Party run; we have to conceptualize ways to change it,” she writes.

Does she have an agenda for once the apparatus has been democratized?

Unfortunately, our Zoom time has run out. Her makeup is done. Sanders needs to put on a “real shirt” for the fundraiser, she says. She leaves me with a smile, and with a line that inevitably becomes the thesis of our call. “We want a microwave, we want everything right now,” she says of her peers. “I want real, lasting structural change. And structural change you cannot get in a microwave.”

More like this
Watch Jacinda Arden’s Devastatingly Honest Resignation Speech
By Sam Ramsden
The UK Government Is *Finally* Banning Conversion Therapy
By Sophie McEvoy
Prince Harry Incorrectly Recites Christina Aguilera’s “Genie In A Bottle” Lyrics
By Jake Viswanath
8 Charities To Donate To During Black History Month
By Alexis Morillo
Get Even More From Bustle — Sign Up For The Newsletter
From hair trends to relationship advice, our daily newsletter has everything you need to sound like a person who’s on TikTok, even if you aren’t.