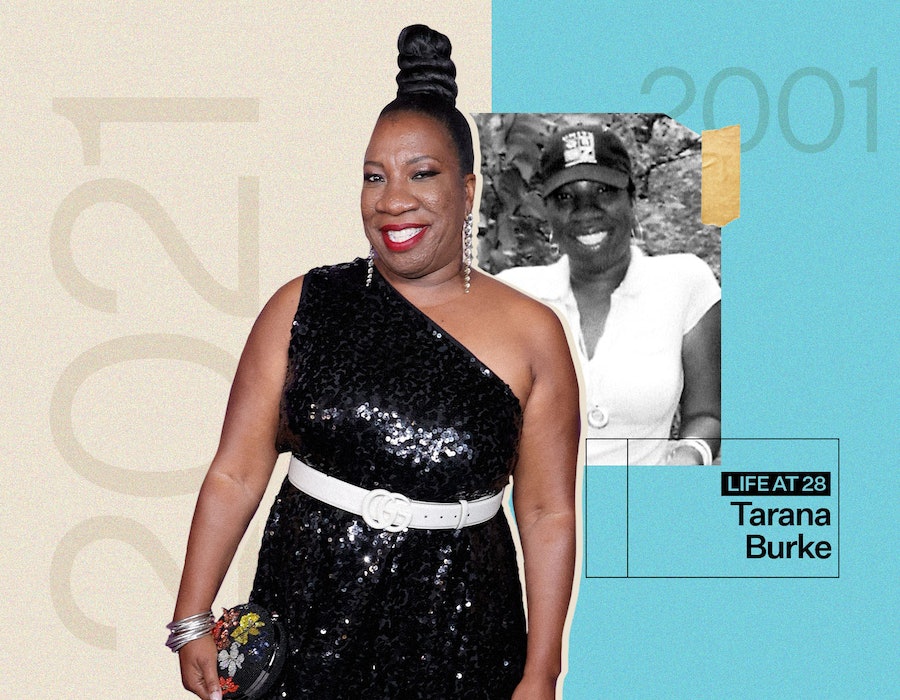 When Tarana Burke looks back at her late 20s, she often returns to memories of her child, Kaia. “My child turned 4, and we threw them a Dora the Explorer party,” she says. Soon after, the activist moved from Montgomery, Alabama, to Selma, in a relocation that she now remembers based on decorating a new bedroom for Kaia, “to make them happy,” she says. Kaia serves as an anchor for Burke’s 20-something memories. Which is not to say that Burke lost herself when Kaia was born – just that she was a working mom. “[I bought] my first real adult couch,” she tells Bustle, fondly remembering a $700 olive-green sofa from Ashley furniture. “At 28, I was adulting.”

The native Bronxite, who was working in Alabama at a fair housing office at age 28, remembers 2001 as “the year of pushback.” She set boundaries in both her personal and professional lives.

In the decades since, Burke, who’s now 48, has continued doing just that — and become a global leader in the proverbial field. In 2006, she coined the phrase “Me Too,” 11 years before it was co-opted online as a Twitter hashtag, which in turn became a verbiage-turned-rallying cry for people to confront sexual harassment and abuse. In September, she released her memoir, Unbound: My Story of Liberation and the Birth of the Me Too Movement, which chronicles her childhood in the Bronx and path to activism, and the civil rights lineage of the Me Too movement. The book debuted on the New York Times bestseller list and has been hailed by Oprah as "Searing. Powerful. Needed."

Below, Burke talks with Bustle about catching discriminatory Realtors, September 11, and quitting her job.

“I stand up for injustice in the world, but I was a people pleaser.”

What key moments from age 28 do you remember?

I turned 28 in 2001, and my child turned 4 that year. It's funny because I always remember 27 as my favorite year of my 20s. The beginning of 28 was tumultuous for me. I made some big decisions about friendships and relationships. I had a friend who was consistently inconsistent and always needed something from me, and always put me in terrible positions. So I decided to stop the friendship. We became friends again later, but I decided to put a pause on our friendship until she could get herself together, which I'd never done before. I put myself first. I remember that very clearly.

What were your other friendships like at the time?

What were you doing in your career at 28?

My work was tied to housing issues in the Black community. I was the enforcement director at the fair housing office in Montgomery, which meant we dealt with housing discrimination. I would send a Black person and a white person to act like they were interested in a house and then come back and report their experiences. In Alabama, it wasn’t against the law to record somebody without their knowledge. So my job was to catch Realtors discriminating and also tackle predatory lending.

How long were you doing that?

One major decision I made at 28 was that I left my job. I had been at the fair housing office for about two years. The day the 9/11 terror attacks happened was awful, because my mom worked down the block from the World Trade Center. I was on the phone with her after the first plane hit. Then the second plane hit, and the phone cut off, and I couldn’t reach her and I fainted. My boss called me the next day to ask why I wasn’t at work on September 11.

Not a model manager.

She wasn't a terrible person, but she was a terrible boss. She would come into the office by 11 a.m., put her feet up on a desk, and read the newspaper for hours. I was working like crazy, basically running the office. Then I got involved in the predatory housing lending project, which was a collaboration with another organization. She showed up at a meeting and said she wanted them to compensate me for my time. Her demand wasn’t necessarily bad, but she was only showing interest because money was involved. Then she threatened them that I wouldn’t work with them unless they put this money up. I was so angry at this idea of this white woman telling these Black people that she controlled me. Like, “Tarana's not coming back.” So I quit and I went to work for them as a consultant.

It was my first consulting job ever, and I quit not knowing [if] they were going to hire me. I quit solely on the strength of not wanting this woman to dictate anything for me. How dare she go into another space like she ran my life, and say, “Tarana, won't be returning unless you…” Nope. Tarana won't be returning to you. How about that?

“It was the first time I broke free to do my own work and make my own way.”

You were saying how you wanted to be treated in the world.

How did 9/11 affect your family? What was that like for you?

Oh, it was awful. It was the first time I ever fainted. I fainted just like white women in the movies do. I was glued to the TV. People were running away at top speed and I knew [my mom] couldn’t run like that. Then I just collapsed, and my poor child was trying to wake me. My stepbrother lived in Atlanta and he drove a truck for a Glass company. He drove his company truck from Atlanta to Alabama to be with me. To sit with me. So I had this giant truck sitting outside my house with glass panels on the side that he was supposed to deliver somewhere in Atlanta. He was like, “I got to go get my sister.” [We couldn’t] reach anyone who lived in New York — his father, my mother, my little brother, no one. You couldn’t call anybody that day.

Did you guys sit around watching the TV or did you try to get your mind off things?

Jay-Z's album The Blueprint dropped that day. My brother brought it with him and we just sat in the living room listening to Jay-Z. My brother told me, “This will calm you down.”

Did it calm you down?

It did help. I was a huge hip-hop and Jay-Z fan. We listened to that album like three times back to back to back. By the third replay, we were finally able to speak to family in New York and know everyone was OK. Then he just drove on back to Atlanta.

Looking back, how did your 28th year change your life trajectory?

Leaving that job allowed me to know I can do the work that I want without being tethered to a 9-to-5. I moved to Selma and started Just Be [Inc.], the organization that ended up starting Me Too. I wouldn't have done that if I hadn't quit that job. It was the first time I broke free to do my own work and make my own way. I forgot all of that happened in my 28th year.

More like this
At 28, Rosie Perez Risked Her Career To Stop Playing Stereotypes
By Gabrielle Bondi
Watch Jacinda Arden’s Devastatingly Honest Resignation Speech
By Sam Ramsden
Jessica Simpson On The Time She Was Pursued By A Backstreet Boy & An *NSYNC Member
By The Editors
At 28, Debra Jo Rupp Was Living A Much Different '70s Show
By Grace Wehniainen
Get Even More From Bustle — Sign Up For The Newsletter
From hair trends to relationship advice, our daily newsletter has everything you need to sound like a person who’s on TikTok, even if you aren’t.