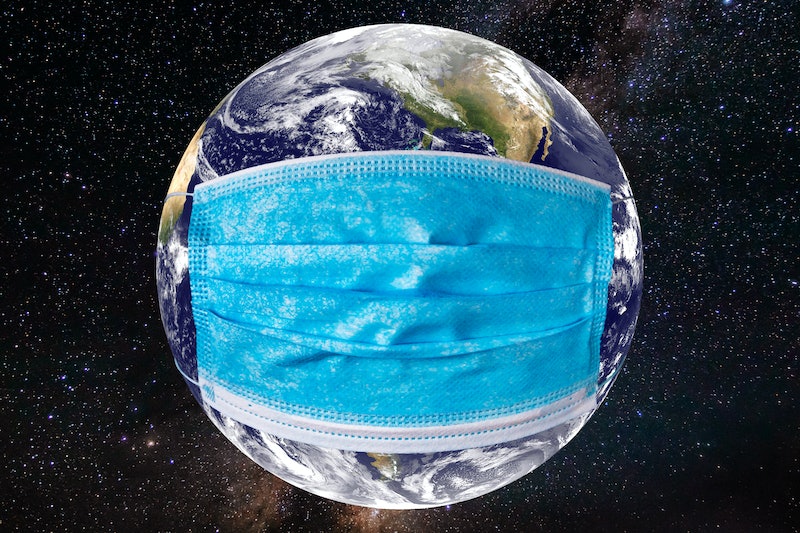 In 2004, Kristin Kim Bart was working on the border of Myanmar and Thailand, where the refugee population numbered into the hundreds of thousands. People needed food, shelter, a guarantee to safety, and — as she and her team were finding — resources for gender-based violence.

"The violence women face during humanitarian disasters is often [from] their own home and family," Bart says. Sixteen years later, the coronavirus pandemic proves no exception. Additionally, women are more likely to be caregivers, and make up a large portion of the health care industry worldwide. Roughly 84% of nurses and midwives around the world are women. Paired together, the virus could be disastrous to refugee camps, especially to the women within them.

The International Rescue Committee and CARE, a poverty-fighting organization, analyzed the specific risks facing women and girls during this pandemic. As the IRC's senior director for gender equality, Bart spoke with Bustle from Washington D.C. about how the outbreak is affecting vulnerable communities in places such as Greece, Syria, and Bangladesh.

What risks do women and girls face during emergency situations?

Even in stable, progressive contexts [like] in the United States, there’s a pandemic of violence against women and girls. On average, one in three women is going to experience some type of violence in their life. That's a global reality. And living under extreme pressure tends to trigger increases in violence. Sexual violence has also been a strategy of war by a number of groups. It's an effective tool to break down a sense of community.

There’s also a gender gap in access to technology. In a lot of communities we work with [in Europe, the Middle East, and Asia], women are often not the primary owner of their phones. It might be kept in the physical hands of the male, and women have to borrow or ask for time to use [it]. We're trying to be mindful about other ways to communicate.

During a pandemic specifically, why are women and girls more vulnerable?

Women occupy 70% of the global health workforce, from nurses to cleaners to doctors. The exposure risk for women in the health sector is incredibly high. Women and girls also are held responsible for care-taking in the family — of children, the elderly, or other family members — so as these individuals fall ill, it will likely be women and girls who are taking care of them, increasing their exposure to the virus further.

What are the key findings of the IRC report?

Domestic violence is central in this crisis, with the amount of quarantining happening. The violence women are experiencing in their homes is increasing. Women are still reproductive agents. People continue to have sex, and women continue to need contraception. They need access to safe abortions [and] pregnancy care. So maintaining sexual and reproductive-health services is critical to minimize the secondary negative impacts.

When do you expect the virus to hit refugee camps and conflict zones?

We believe it is hitting now. The majority of the countries we operate in are actively responding to the crisis. We don't know the full extent of it, as testing remains limited.

What can we do to advocate for women and girls in conflict zones?

The experiences we're having — shortage of supplies, concerns about health care — are challenges that people living in conflict face every day. There's a lot that the average person can do, and it starts with staying informed. Standing up for the rights, dignity, and safety of refugees can help. One person really can make a difference.

What’s giving you hope this week?

This is a time for significant gender transformation. We've seen this in past emergencies when usual behaviors are interrupted. I hope that men see how much women do every day. I think many men are going to step up to the plate and say, “That's not right, and I want to play a different role.” I’ve already seen men advocating for that. We need more of that to finally have equitable gender roles.

More like this
Watch Jacinda Arden’s Devastatingly Honest Resignation Speech
By Sam Ramsden
6 Organizations Fighting Police Brutality That You Can Support Right Now
By Syeda Khaula Saad and JR Thorpe
24 History-Making Black Women You Probably Didn't Learn About In School
By Ayana Lage and JR Thorpe
25 Inspiring Quotes From Black Women To Celebrate Black History Month
By Kyli Rodriguez-Cayro and JR Thorpe
Get Even More From Bustle — Sign Up For The Newsletter
From hair trends to relationship advice, our daily newsletter has everything you need to sound like a person who’s on TikTok, even if you aren’t.