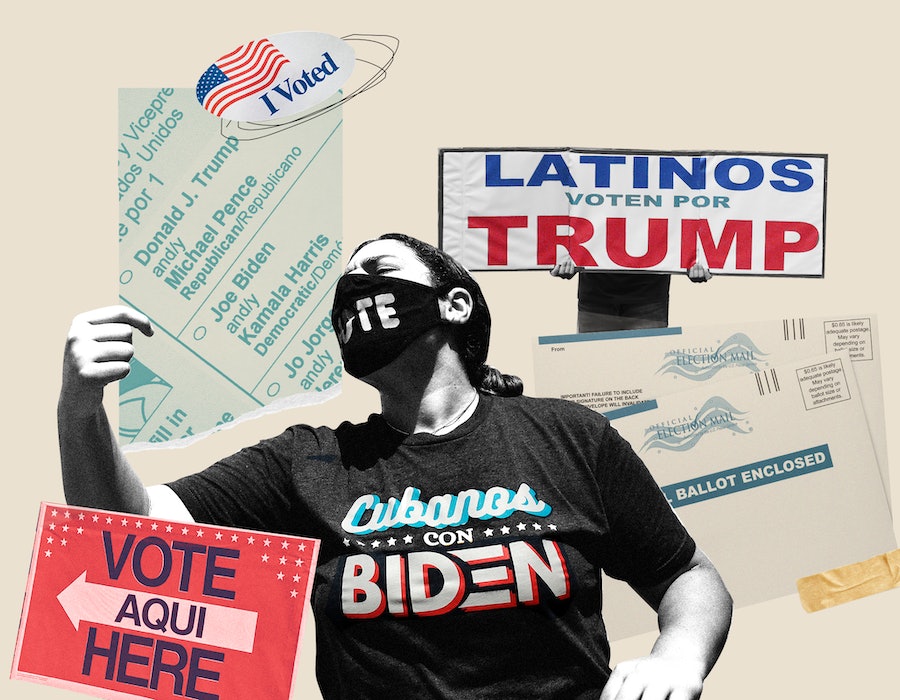 Daniela Ferrera has voted in every election since she turned 18. But this year, the 22-year-old had a laundry list of things she needed to do before she cast her mail-in ballot. One of them was triple-checking that the signature the state had on file matched the one she was going to sign her ballot with — because Black and Latinx voters are twice as likely to get their ballot thrown out than white voters are. But the extra steps didn’t dampen her enthusiasm. She sees this election as the most important one yet, “not only in our lifetimes, but frankly in our history,” she tells Bustle.

This year, Latinx Americans account for 32 million eligible voters — the biggest racial or ethnic minority voter block this year. Latinx voters are also concentrated in some of 2020's most contentious battleground states — places like Florida and Arizona. In Florida, where Ferrera lives, Latinx voters make up 17% of total registered voters. The Latinx vote in 2020 is even more important than it’s been in previous elections, but historically, it’s an electorate that tends to be undervalued by campaigns. “The Latino vote has not been a priority for campaigns,” Vanessa Cárdenas, a political strategist who helps candidates engage with the Latinx community, tells Bustle. “There has not been a lot of emphasis on getting the Latino vote, mainly because it's harder to get the Latino vote.”

Latinx-Americans tend to be younger, and young people in general are historically less likely to vote. Young, eligible voters are also harder to pin down because they move frequently for school or work, so polling them to get targeted data is also difficult. In some states, like Texas, strict voter identification laws make it harder for eligible Latinx people to vote — despite almost 40% of the state’s population identifying as Latinx.

Across the board, women voters tend to show up more than their male counterparts (not enough data is kept on non-binary voters, who face a host of challenges). That gap is especially wide among Latinx voters. In 2016, Latina voters were 5% more likely to vote than male Latino voters. Christina Bejarano, Ph.D., a gender studies professor at Texas Woman’s University in Dallas, told PRI’s The World that she attributes this gap to the fact that Latinas have higher education rates, higher naturalization rates, and are more likely to pay attention to politics. Still, until this year, few campaigns did groundwork to specifically engage Latinx women ahead of major elections, and Ferrera says that has to change. “Intersectionality should be at the core of any policy agenda of any outreach to a community,” she says.

Leading up to Nov. 3, the Biden campaign has hosted a number of events aimed at speaking to and with Latina communities, featuring prominent Latina voices like Ana Navarro and America Ferrera. Todos Con Biden, the Latinx-focused arm of Biden’s campaign, has also conducted bilingual phone banking throughout the campaign season to reach Spanish-speaking voters. And the Democratic National Committee released bilingual ads reminding people to vote early. The Trump campaign dropped its first Spanish ad in October — and male Latino voters often still lean towards voting red. “Here in South Florida, I've seen this situation where you have a husband that is a Trump supporter and a wife that is a Joe Biden supporter,” Ferrera says.

Beyond the raw numbers and mounting evidence that Latinas tend to be more politically engaged, both Ferrera and Cárdenas cited something intangible that adds importance to the Latina electorate: their roles at home. “Latinas are always at the forefront of the fight because they're the leaders of our household,” Ferrera says. “My mom is the one that runs the household.”

In recent (and pre-pandemic) years, the Latina workforce has grown quicker than that of the Latino men. Latinas are also more likely to have a college degree than Latino men, and a record number of Latinas are running for office in 2020.

Despite being more politically engaged, more educated, and (in the case of Ferrera’s mom) more powerful at home, Latinas still face major barriers. The wage gap for Latinas is the widest: they make 46% less than white men, and 31% less than white women. COVID-19 related job loss hit Latinas the hardest of any group. Black and Hispanic communities were hit the hardest by the pandemic, and among pregnant people who contracted COVID-19, the lion’s share were Latinas. “At the end of the day, we can also say that Latinos in particular are disproportionately impacted and are suffering the most when you have crises such as COVID,” Cárdenas says.

That’s part of the reason why young Latina voters like Ferrera see this election as the most important one. Though the Latinx-American community is often treated like a monolith (like in the stats and figures we’ve talked about in this article), the reality is it is made up of many distinct cultures, with different sets of values and political priorities. And for Ferrera, who is Cuban-American, some of the Trump administration's policies stir up particularly painful memories. “As a Cuban American and as someone that fled political persecution and authoritarianism in Cuba,” she says, “I'm reliving a lot of the trauma that I experienced in Cuba when I see Donald Trump.”

She says Biden’s campaign has made a marked effort to recognize the Latinx community’s diverse and distinct sections, which she thinks is key to engaging that voter bloc. She’s not alone. “Joe Biden gets it,” Nathalie Rayes, CEO of Latino Victory Fund, said during a Todos Con Biden virtual event on Sept. 17. “We have Puerto Rico on this wonderful call; we have Mexico, Nicaragua, Cuba, the Dominican Republic, and my own Venezuela, and many, many other countries represented.”

Despite unfounded criticism from the right accusing Biden of having socialist or communist policies — a point of contention for some Latinx people with roots in countries with corrupt regimes — Ferrera says she sees more resemblance to that kind of corruption in the current administration. “This election is a very binary choice,” she says. “We can have democracy and freedom with a Biden-Harris administration, or we could spiral into an authoritarian regime, very similar to those of Latin America.”

More like this
Romance Authors Are Mobilizing For Reproductive Rights
By Natalia Perez-Gonzalez
Bimini, Tia Kofi & More React To Cherry Valentine’s Death
By Catharina Cheung
Women Around The World Are Cutting Their Hair In Solidarity With Mahsa Amini
By Darshita Goyal
Black Women's Equal Pay Day Highlights An Upsetting Problem
By Brandi Neal
Get Even More From Bustle — Sign Up For The Newsletter