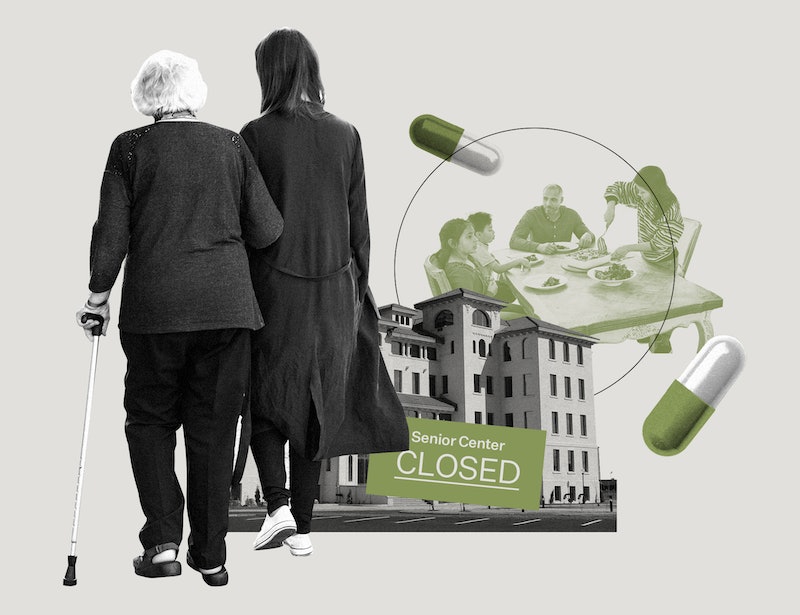 Alexis Baden-Meyer’s mornings are complicated. She wakes up around 6 a.m., ushering herself out of bed just as the Washington D.C. sun climbs over the horizon. Her mother sleeps in the adjoining bedroom, to which the 46-year-old daughter makes a beeline. She bathes and dresses her mother, who's 76 with Alzheimer's. Around the house, slowly, others stir. By mid-morning, her husband is cooking breakfast for their young son, and if the timing’s right, he makes breakfast for Baden-Meyer’s mom as well. It’s one less thing for his wife to worry about.

In addition to her full-time nonprofit job, Baden-Meyer is her mother's full-time caregiver. More than 65 million Americans are caregivers for relatives who might need help due to aging, sickness, or disability. Some statistics estimate that more than 75% of those people are women. In Virginia's D.C. suburbs, where Baden-Meyer lives, that number jumps to 90%. She’s part of a group called “the sandwich generation,” people responsible both for their children and parents. According to a 2013 study by the Pew Research Center, 15% of middle-age adults in the United States give financial support to both their children and at least one elderly parent. As the U.S. population ages, and Americans have kids later in life, that demographic is growing.

In mid-March, D.C. Mayor Muriel Bowser declared the novel coronavirus a public-health emergency. Caring for her family was going to look different.

“With Alzheimer's at this stage, there are still moments when her personality shines through,” Baden-Meyer says of her mother, who was diagnosed in 2015. “It's joy and pain every day.”

Before the pandemic, her mother would attend a daytime care facility on weekdays, giving Baden-Meyer the ability to clock in for a full day’s work. But now that facility is closed. One of their two paid care workers had to stop coming. Her children are home from school, and her husband was furloughed from his job, swapping team meetings for playtime with her youngest child. (Her older daughter is from a previous marriage and splits time between parents.) “In this country, we don't have paid family leave, but the circumstances are allowing us to function as if we do,” says Baden-Meyer, who answers my phone call from the bathroom, an easy enough space to both hold a conversation and check her mother's vitals.

Given that nursing homes quickly became hot spots for COVID-19, Baden-Meyer says she’s happy her mother is with her. And although it’s gotten a bit overcrowded with stay-at-home mandates, she feels lucky to have her loved ones close.

Baden-Meyer stumbled into the sandwich generation on request. In 2015, her late father asked that she care for him and his wife after her mother’s diagnosis. They dreaded being sent to a facility, and Baden-Meyer felt helping her parents was worth the financial and mental strain. She started caring for them in 2016. “I said, ‘Well, I’ll work from home, I’ll risk my job, and we'll make it work,’” she says.

Only 15% of family caregivers look after two adults simultaneously, like Baden-Meyer initially did. (Her father passed away in hospice care in February, just before the pandemic took hold of the East Coast.)

On average, caregivers have to spend an extra $7,000 a year out-of-pocket to do the job, according to data compiled by the National Alliance for Caregiving and Caring Across Generations in 2019. Twenty-five percent of the survey respondents said it was hard to find affordable services, and one-third reported feeling emotional stress.

The challenges that she and her family are facing are common, says Janet Kim, the spokesperson for Caring Across Generations, an organization working toward policy change to make caregiving more financially accessible. “A lot of [people] become caregivers in a moment of crisis, when something unexpected happens and their life gets turned upside down,” she notes. The problem is that the job is highly undervalued and not viewed as essential work. “It's based on the expectation that a lot of women in our families will do this work for free.”

Benefits for family caregivers vary greatly by state, and federal support is limited. Paid workers make an average of $12.36 an hour, roughly $4 below the 2019 living wage for someone in the United States, according to the Massachusetts Institute of Technology.

By 9 p.m., Baden-Meyer is typically wrapping up her eight-hour workday. The D.C. sun has already set. Her mother’s paid caregiver finishes her shift. She ends the evening by tucking in her children and her mother for the night. “It's a mixed bag, because I'm here at home with my family,” she says. “I'm never lonely. I'm with the people I love most in the world.”