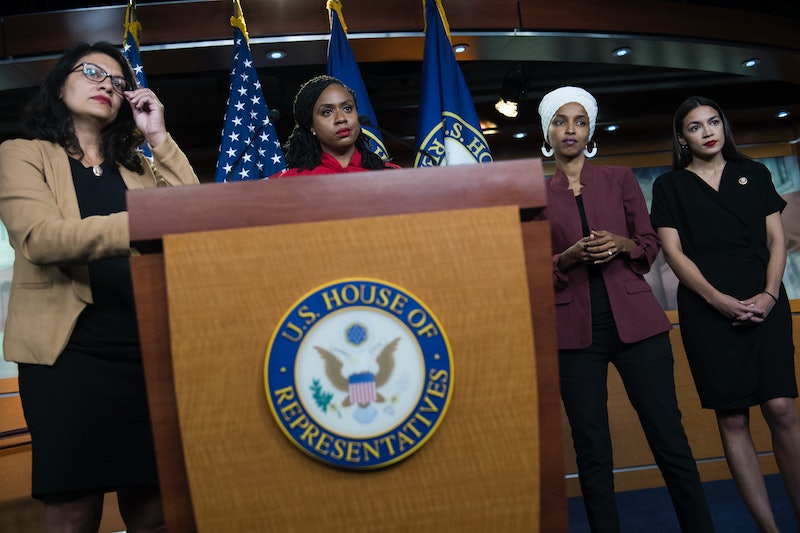 The four women joined the U.S. House of Representatives together in 2018, and their now-ubiquitous nickname started when Ocasio-Cortez captioned an Instagram post of the group as such shortly after their wins. They're each backed by the Justice Democrats, a group that seeks to elect more progressive candidates in order to break establishment molds. They're connected, then, by politics, but also by their historic victories and joint racist attacks by president Trump. They stick up for each other on social media and tout a shared message of equity and inclusivity. Last year, Pressley stressed in a press conference that the nickname encompasses more than just its inaugural members. “We are more than four people,” Pressley said. “We ran on a mandate to advocate for those ignored, left out, and left behind. Our squad is big. Our squad includes any person committed to building a more equitable and just world."

In January, when newly elected representatives join the House, their team is likely to grow. These three congresspeople-elect have similarly been endorsed by the Justice Democrats.

Bush, a former nurse and vocal Black Lives Matter advocate, won her race with a large majority of the vote. It was her second attempt to unseat Democratic incumbent William Lacy Clay Jr. for Missouri’s first district, which she did over the summer in the state's primary elections. (Her 2018 loss was documented alongside Ocasio-Cortez’s win in the 2019 film Knocking Down the House.) Though Ocasio-Cortez didn’t officially endorse Bush, she did send out a tweet congratulating Bush on her historic win. “You've shown that the power of grassroots, mass-movement politics is stronger than gatekeepers & big money - it’s about advancing the tide of justice whose time has come [sic.],” Ocasio-Cortez tweeted.

Last month, Bush showed support for Ocasio-Cortez after Trump notoriously referred to the foursome as “AOC +3” and called them a “nightmare for America.” Bush tweeted, “AOC +3? Hate to break it to you, but it’s about to be a lot more than 3."

Over the summer, Bowman unseated long-serving Democratic incumbent Eliot Engel in the New York primary elections. Given the upset, he was called “the next AOC," since his win in New York's 16th district confirmed that hers hadn't been a fluke. He ran on a platform highlighting his career as an educator and his commitment to improving the lives of children. Bowman received endorsements from several progressive powerhouses, including Ocasio-Cortez and Sens. Bernie Sanders and Elizabeth Warren.

In Illinois' 3rd district, Marie Newman defeated both the Democratic incumbent, Rep. Dan Lipinski, in the House primary, and her Republican opponent in the general election. She won the November vote by by roughly 6 points. She’ll be the first woman to represent her district. She's been endorsed by progressive organizations like EMILY’s List, which was especially important given that Lipinski was an anti-abortion legislator. Like each member of the squad, a major facet of her platform focuses on fighting for working families and closing the income gap. She’s also spoken in opposition of Israel’s occupation of the West Bank and the Israeli blockade of Gaza, a similar stance to those of Ocasio-Cortez, Omar, and Tlaib.