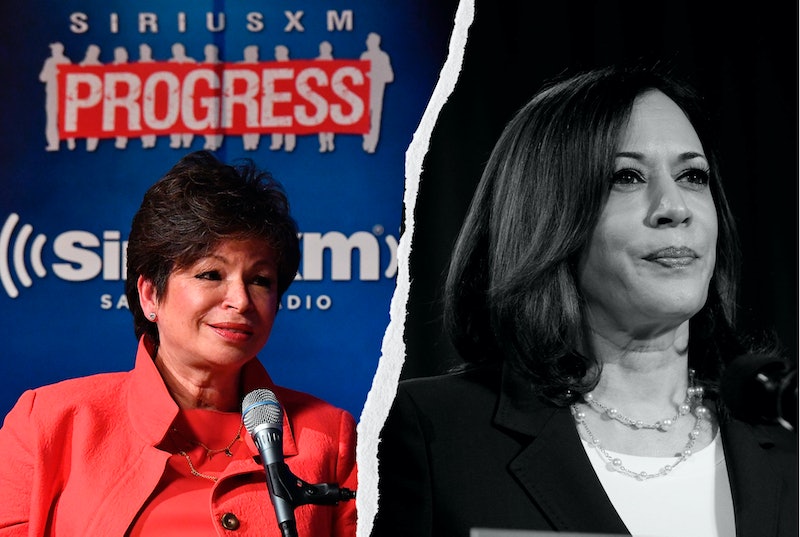 Two days after President Donald Trump left the Walter Reed National Military Medical Center with COVID-19, his second-in-command, Vice President Mike Pence, will face off against Sen. Kamala Harris in the vice presidential debate, airing tonight at 9 p.m. ET. The candidates will be separated by plexiglass and seated 12 feet apart, since Pence was likely exposed to the virus. (Pence gets tested every day, and has so far remained negative). The health of both debaters will be top of mind, given that their running mates — two men in their mid-70s — are at increased risk for the virus and serious complications.

“It's a wake-up call for people to realize that [they’re] a heartbeat away from the highest office in the land,” says Valerie Jarrett, a former senior advisor to President Barack Obama. “But the stakes were already pretty high,” she tells Bustle.

It’s not just the pandemic that makes this debate historical. Harris is also the first woman of color to be nominated for this office by a major political party. “It's historic,” Jarrett says. “It's going to shatter an important glass ceiling, and I am delighted that young boys and girls across our country will grow up thinking it's perfectly normal to have a woman of color on the ticket.”

During Obama’s first presidential run in 2008, Jarrett was by his side, so high-stakes debates are nothing new. (She was also Michelle Obama’s mentor.) She recognizes some similarities. “President Obama view[ed] the debates as an opportunity to speak directly to the American people about his values, his life story, and his priorities,” says Jarrett, adding that she found it immensely stressful from the sidelines. “I feel for the teams that are helping prepare the candidates.” In her 2019 memoir, Finding My Voice, Jarrett writes about Obama’s chronic tardiness — even for debates. “You do the very best you can, but ultimately when they go out on the stage, it's all on them.”

Jarrett imagaines Harris will take a similar approach: trying to translate the key issues for viewers in ways that will resonate. She expects the debate to be more cordial than Trump and Joe Biden’s face-off in the first presidential debate. “He's a much more polished debater,” she says of Pence, in comparison to Trump. “It’s unlikely that Vice President Pence would attempt to be as rude and incapable of controlling himself as President Trump was.”

Harris, of late, has been prioritizing positivity, as noted in her ELLE magazine cover story. “I think [she’s] looking forward to an opportunity to speak in a candid and honest way about why she's so optimistic about our nation's future,” Jarrett says.